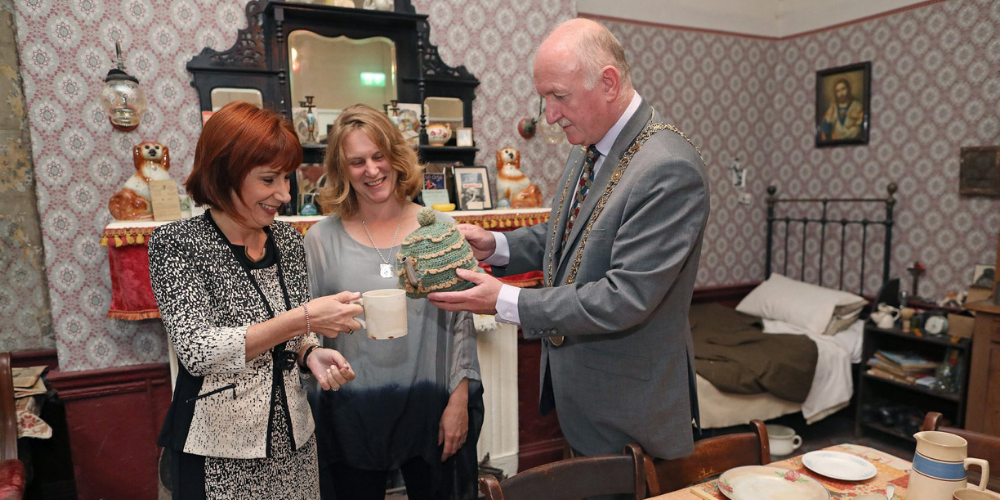 People with an interest in Dublin’s social and architectural history are being invited to take a trip to Dublin’s newest museum, 14 Henrietta Street, which was officially opened by Lord Mayor of Dublin, Nial Ring and Minister for Culture, Heritage and the Gaeltacht, Josepha Madigan TD.

Set in a Georgian townhouse in the north inner city, 14 Henrietta Street tells the story of the building’s shifting fortunes, from the splendour of its Georgian origins in the 1700s, to a tenement building from the 1880s to the 1970s. Through people and memory, it aims to deepen understanding of the history of urban life and housing in Ireland. Taking the stories, personal experiences and objects of former residents of the tenements, coupled with ongoing social and architectural history research, the museum gathers, interprets and preserves Dublin’s tenement history.

Tour guides accompany visitors through three floors of the Dublin City Council-owned building, revealing the building’s many stories, told through the walls of the house itself, recreated immersive rooms, audio and film.

Commenting at the launch, Lord Mayor of Dublin, Nial Ring, said: “From Georgian townhouse to tenement dwellings,14 Henrietta Street is a very important thread in the fabric of Dublin city, and one that Dublin City Council has shown a long commitment to not only preserving, but returning to the public as a memory-keeper.

“Dublin City Council acted to rescue this building more than a decade ago and huge work has been carried out over that time to stabilise, preserve and restore what was a derelict building. The idea to turn it into a museum of the city’s social history, tracing its use from a fashionable Georgian townhouse to tenement dwellings, became a reality when planning permission was secured in 2015 and it is fantastic to see what has been achieved in that short period of time.

“Reflecting its latter day use as tenement dwellings, 14 Henrietta Street has given a voice to some of our city’s once forgotten citizens. It is very moving to hear that lived history of our city, told through the former residents of 14 Henrietta Street. I’m really proud to officially open 14 Henrietta Street today, after what has been an epic 10-year journey for Dublin City Council; and a 270-year adventure for this fine house.”

Minister for Culture, Heritage and the Gaeltacht, Josepha Madigan TD, said: “This Government is delighted to be associated with this wonderful project.  My Department made significant funding available to support its completion and it is most fitting that 14 Henrietta Street opens to the public in this, the European Year of Cultural Heritage.  The theme of this campaign is Make a Connection and 14 Henrietta Street succeeds in making a connection between today’s visitor and those living in Dublin in earlier generations – from the Georgian period through to the subsequent brutal and extended period of tenement living.  I believe that people and communities are the custodians of our heritage and the unvarnished memories gathered as part of the 14 Henrietta Street project truly reflect that.”

She added: “14 Henrietta Street is a remarkable building.  Being guided through the house really is like stepping back in time.  The detail in all aspects of the museum is impressive, from the restoration of key architectural features to the immersive films projected on the walls.  I have no doubt that this museum will hold a prominent place in the family of museums, telling important stories of our city and culture.  I wish to pay tribute to Dublin City Council and the team of architects, builders, conservators and historians who have collectively breathed new life into this house and this historic street, a major social, cultural and architectural heritage asset for Dublin and the nation.”

14 Henrietta Street is operated by the Dublin City Council Culture Company. Chief Executive Iseult Byrne said: “We are delighted to now officially open the doors to the public, following limited tours during the summer. Many people played a part in bringing together the history of 14 Henrietta Street and I would like to thank everyone involved, especially the former residents of tenement buildings, who shared their memories through the ‘Urban Memories and Tenement Experiences’ oral history projects. Their involvement was invaluable in the making of this museum. 14 Henrietta Street continues to gather memories of growing up in Dublin’s tenements and anyone who would like to share their experiences can get in touch via info@14HenriettaStreet.ie to find out about our programme of memory collection events, which will start later in the year.”

Guided tours of 14 Henrietta Street will take place on the hour five days a week, from 10am to 4pm Wednesday to Saturday and from noon to 4pm on Sundays. Tickets cost €9 adult / €6 concession and are available from www.14henriettastreet.ie. Advance booking is recommended. Group bookings are available.