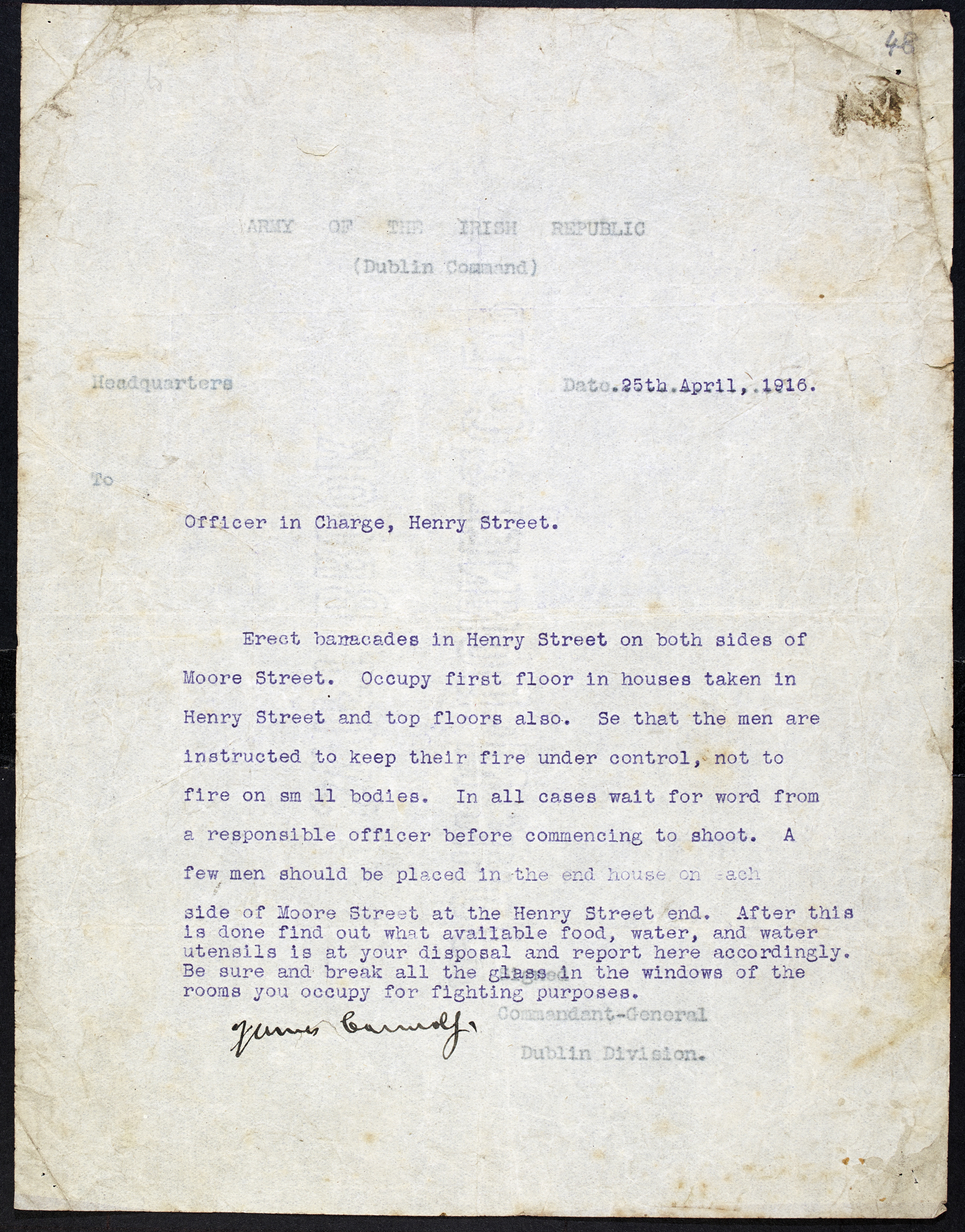 The National Library of Ireland (NLI), as part of its 1916 Digital Collections, has today (11.01.16) made personal papers and photographs related to Tom Clarke and James Connolly available online. The unique collections are related to the seven signatories of the Proclamation and tell the story of the momentous events of 1916.

These collections of material relating to Clarke and Connolly papers are now available online to the public free of charge at catalogue.nli.ie and join the Éamonn Ceannt collection, published in December to coincide with the launch of the National Library’s 2016 Programme.

The 1916 Digital Collections is a culmination of years of intensive work by the NLI team, and more than 20,000 items will be available online by April 2016. The digitised papers include diaries, postcards and photographs that tell the stories of the family and working lives of each signatory, alongside dramatic records of their activities during Easter Week 1916.

Highlights from the Clarke and Connolly Digital Collections

Highlights from the Tom Clarke collection include letters from him to Kathleen Daly, one of which is dated from 8th August 1899 and expresses delight at her declaration of love and his forthcoming trip to America. Others include details of his plans and preparations for opening a shop in Dublin. In another letter, dating from 1908, he is reassuring Kathleen, by then his wife, that it was not a mistake to move back to Ireland.

In a letter from 1905 sent by Tom Clarke to his son John Daly Clarke, who was staying in Limerick with his mother, Kathleen, after he had been unwell, Clarke writes: “How many cows have you seen, and did they all have ears and tails? Did you see the one that jumped over the moon at all, he must be a great fellow.”

The Connolly papers were gathered as part of the William O’Brien collection. They feature personal letters from Connolly to his then fiancée Lily, including one which begins “This is a love letter”, as well as a poignant newspaper cutting from the ‘Weekly People’ in which James and Lillie Connolly thank friends for condolences received upon the death of their daughter, Mona, dating from 3rd September, 1903. The manuscript draft of a song by James Connolly, titled ‘When Labor Calls’, circa 1903 also features, as does a letter from 1907 to the Secretary of the ISP (Irish Socialist Party) about the formation of a new organisation of Irish socialists in the United States, and requesting a poem, ‘The artisan’s garret’, for use in that organisation’s inauguration.

An order issued by James Connolly, Commandant-General, Dublin Division, Army of the Irish Republic, to “Officer in Charge [Frank Henderson], Henry Street” informing him to erect barricades in Henry Street and occupy the first and top floors of houses in the street, dating from 25th April 1916, also features in the collection.

Speaking at the announcement of the Clarke and Connolly collections today, Dr Sandra Collins, Director of the National Library said: “We are delighted to continue our contribution to the 1916 commemorations by cataloguing and digitising materials pertaining to Tom Clarke and James Connolly. These original documents will allow viewers to experience the drama and intensity of the Easter Rising as well as gain insights into the social history of 1916 and personal stories of those involved. These collections remind us of the people behind the history.

“At the heart of the National Library’s plans for 2016 is our core mission: collecting and making available Irish memory and heritage for people everywhere. It is with great pleasure that we make this fascinating repository available – online and free of charge – to people in Ireland and around the world. At the same time as making these historic documents available, throughout 2016 we will be archiving the websites that tell the story of Ireland today.”

In February 2016, the NLI will issue the material related to Seán MacDiarmada and Thomas MacDonagh, concluding with the papers of Patrick Pearse and Joseph Plunkett in March 2016.

The NLI will offer a series of free events and activities throughout 2016 to mark the centenary commemorations of the Easter Rising.  Highlights of the NLI’s 2016 programme include:

The NLI will also offer a series of curated perspectives on 1916 onsite at the National Library’s buildings on Kildare Street and in Temple Bar, Dublin 2 and online. These include ‘Rising’: a flagship photographic exhibition in the National Photographic Archive, and ‘Signatories’: an exhibition in the NLI’s Kildare Street building, which will present selected documents related to the seven signatories.

Details of the NLI’s full 2016 programme of events, from exhibitions and public events to major digitisation projects, are available on the NLI’s website www.nli.ie.