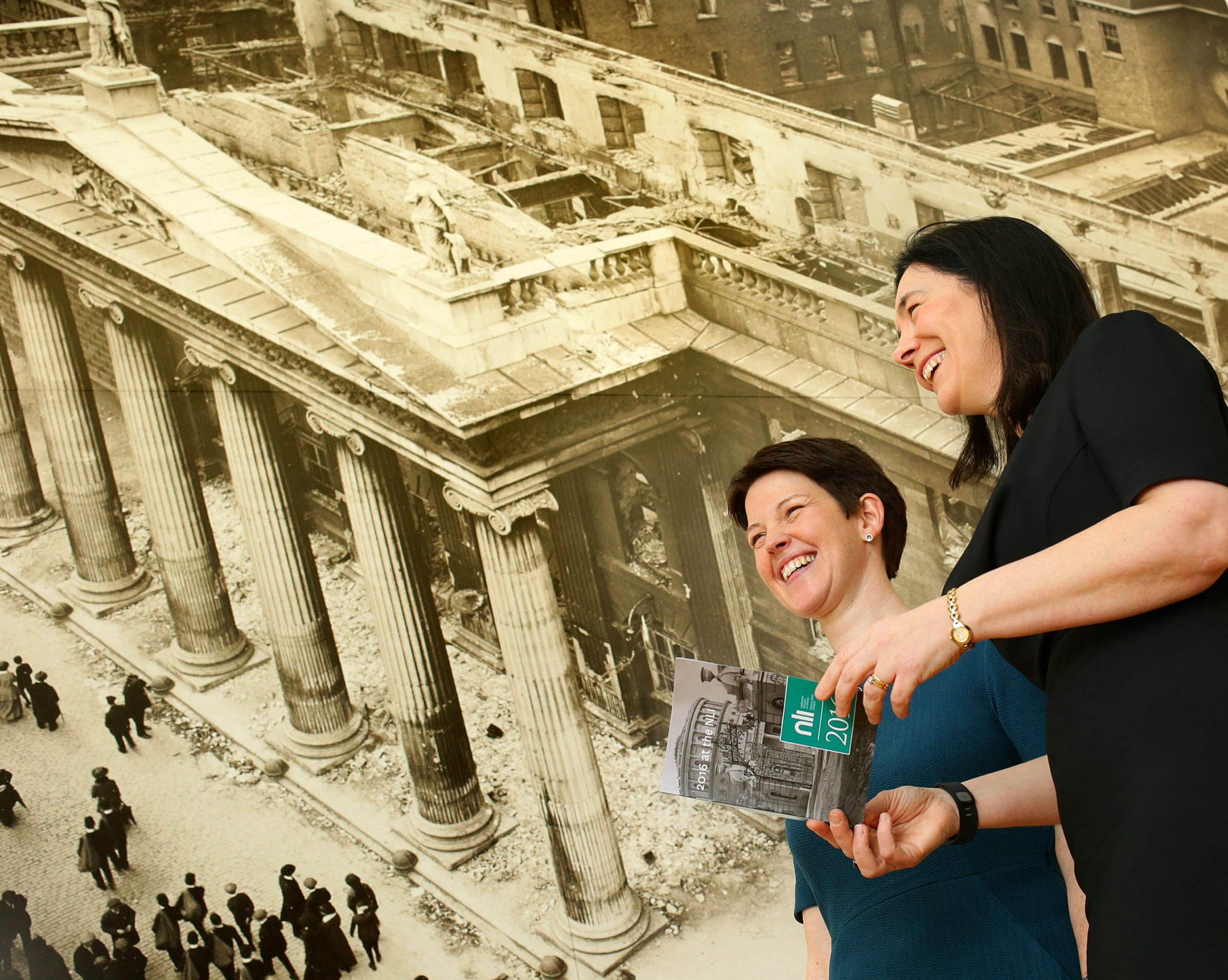 The National Library of Ireland (NLI)’s National Photographic Archive has today (02.02.16) launched ‘Rising’, a major photographic exhibition which showcases the NLI’s collection of rich imagery documenting the events and locations of 1916.

‘Rising’ draws on some of the most important collections of photographs at the National Library. It includes images from the Keogh Collection, the Independent Newspapers (Ireland) Collection and newly digitised photographs from the De Valera Collection, and various 1916 albums. The exhibition references the complex political situation in the run up to the Easter Rising and the various groups involved. It consists of 60 photographs, including a number of large scale photographs which emphasise the Rising’s impact on Dublin’s city centre. These images are enhanced by audio recordings from selected letters and diaries detailing first-hand accounts of the Rising.

In addition to showing the physical damage to the city centre, the exhibition features photographs relating to the arrests, courts martials and internments following the Rising, and the subsequent amnesty for prisoners as the British Government saw the tide turning for those involved in the insurrection.

The short audio pieces feature actors reading witness accounts of the Rising from people of different backgrounds including Dick Humphreys, an Irish Volunteer, who describes a scene in the GPO and the fires on Sackville Street following the bombardment of the area. Humphreys was a nephew of The O’Rahilly and fought in the GPO. He was interned in Wakefield Gaol following the Rising.

Another audio recording comes from the letters of Sarah Ismena Rohde, a widow living in Dundrum, who describes critical civilian reactions to the Rising and the effects on the city’s population.

Commenting today, exhibition curator Sara Smyth from the NLI, said: “’Rising’ paints a very vivid picture of the events and locations of 1916 and brings visitors into the world of those who experienced the Rising first hand. When we selected the content for the exhibition, we were keen to address certain questions:  How did Dublin look during Easter Week 1916, as fighting raged and buildings fell? What kind of landscape, physical and political, was left after the surrender?

“There are a number of unusual images on display. They include a photograph of Dr Edmund J. McWeeney, a member of the public who, like many Dubliners, discovered the Proclamation posted all over the city on Easter Monday. There is also a photograph of a small group of Irish Volunteers and Irish Citizen Army in the GPO during the Rising.”

Sandra Collins, Director of the NLI, added: “Photographs are such an evocative, intimate contribution to the stories of 1916, they draw the viewer directly into the experience of the Easter Rising. We are delighted to offer this beautifully curated exhibition, which is free and open for everyone to visit and enjoy.

“All the photographs in this exhibition are original material drawn from the rich and diverse 1916 collections in the National Library, and we are proud to add the digitised versions to the NLI’s online catalogue so they can be enjoyed across the world by anyone who wants to engage with the Easter Rising and is not able to visit the National Photographic Archive.

“‘Rising’ is the NLI’s flagship exhibition for 2016 and I invite everyone to visit the National Photographic Archive and explore the exhibition which is running until the end of October 2016.”

The NLI recently announced a unique digital repository of personal papers and photographs that tell the story of the momentous events of 1916.  In addition to the 70,000 digital images already available through the NLI’s online catalogue, the digitised personal papers and photographs of the seven signatories of the 1916 Proclamation will all be available online by April 2016. The full collection of Ceannt, Clarke and Connolly’s papers are already available to the public, free of charge at catalogue.nli.ie.  This month, the NLI will issue the material related to Seán MacDiarmada and Thomas MacDonagh, concluding with the papers of Patrick Pearse and Joseph Plunkett in March 2016.

The NLI will also offer a series of free events and activities throughout 2016 to mark the centenary commemorations of the Easter Rising.  Highlights of the NLI’s 2016 programme include:

Visitors to the NLI’s main library building on Kildare Street can explore the exhibition ‘Signatories’, a series of graphics introducing the seven signatories of the 1916 Proclamation. The exhibition runs until the end of December 2016 and allows everyone to learn more about these men and the women who worked alongside them. The display also features a focus on the staff of the NLI in 1916, and reveals how they were caught up in the year’s events.

In No 2/3 Kildare Street, the ongoing exhibition ‘World War Ireland: Exploring the Irish Experience’, generously supported by the British Embassy in Ireland, highlights Irish involvement in the Battle of the Somme for the 100th anniversary.

Details of the NLI’s full 2016 programme of events, from exhibitions and public events to major digitisation projects, are available on the NLI’s website www.nli.ie.

‘Rising’ is free to visit, and is open seven days weekly: Monday to Saturday 10am to 5pm and 12noon to 5pm on Sundays. The exhibition runs in the NPA until the end of October 2016.

The exhibition is part of the Ireland 2016 Centenary Programme, and was made possible through funding awarded under this initiative. The Programme, led by Minister for Arts, Heritage and the Gaeltacht, Heather Humphreys, TD, is a year-long programme of activity to commemorate the events of the 1916 Rising, to reflect on our achievements over the last 100 years and to look towards Ireland’s future.  For more information, visit www.ireland.ie. #ireland2016

About the NLI: The mission of the National Library of Ireland is to collect, preserve, promote and make accessible the documentary and intellectual record of the life of Ireland and to contribute to the provision of access to the larger universe of recorded knowledge.  It is open, free of charge, to all those who wish to consult the collections.  The Office of the Chief Herald in Kildare Street and the National Photographic Archive in Temple Bar are both part of the National Library.  Further information is available at www.nli.ie, @NLIreland.