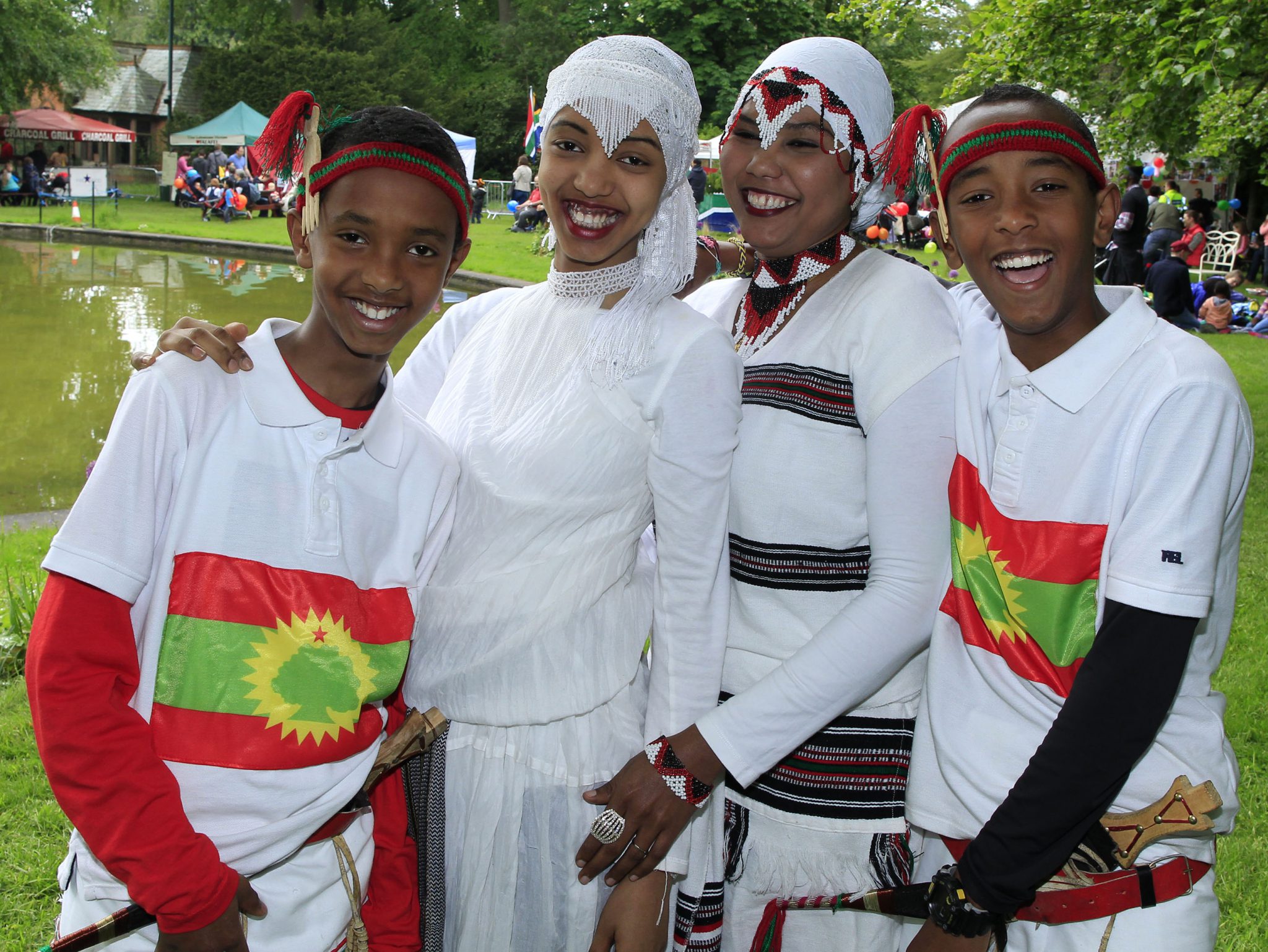 Last Sunday, 25th May, we welcomed 27,000 visitors to the annual Africa Day 2014 Dublin celebrations! Although it was slightly rainy, the sun made an appearance and every one was in great spirits and out in force to celebrate the day!

We’d like to say a big thank you to everyone who attended and all who were involved in making this year’s Africa Day Dublin Flagship event in Farmleigh a huge success. Thanks to Dublin Bus who provided free shuttle buses throughout the day, helping to bring Africa Day visitors right to the centre of the action! 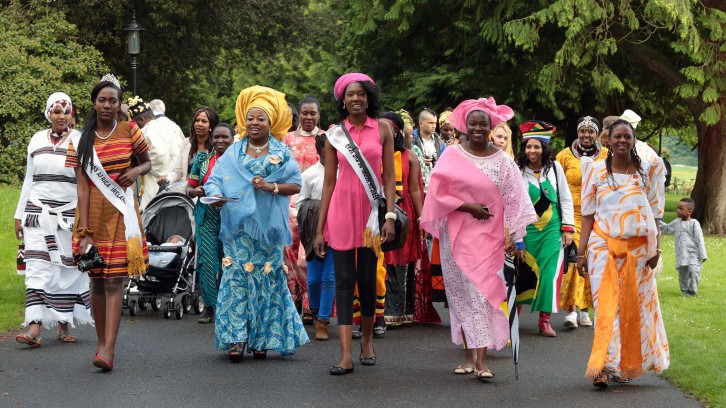 A big thank you to Moneygram, who supported the children’s area and were involved in our photo call in the run up to the big day. The Luas kindly supported Africa Day by providing information on the Luas website and social media, promoting the event and letting visitors know how best to get there on the day.

Many participants from African community groups, NGOs and other organisations were present in the African Bazaar (aka Marrakech), as well as plenty of food vendors selling delicious food from Africa and around the world – the ice cream van had quite the queue too! A number of embassies including Morocco, Nigeria, Kenya, Ethiopia, South Africa, and Lesotho took part with different activities taking place at their stands. 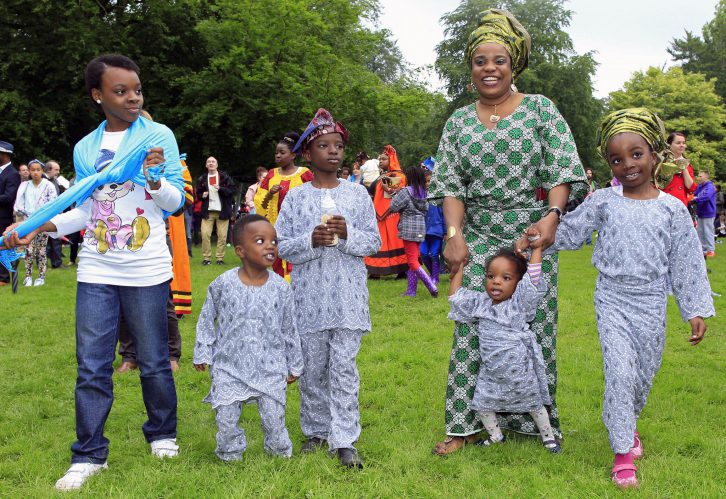 Highlights of the day were the fairground attractions at the children’s area, aka Mount Kiddimanjiro – the aerial trampoline was very popular! Kíla attracted huge crowds at the Kwassa Kwassa main stage, as well as our final act of the day, Colours Afrobeat Foundation. On the Atilogwu stage, there was a constant dance party throughout the day, with DJs spinning hip hop and electrobeat tunes, and the Irish Aid ‘Bang the Drum’ drumming workshops were always full of young and old learning how to play the djembe drum. 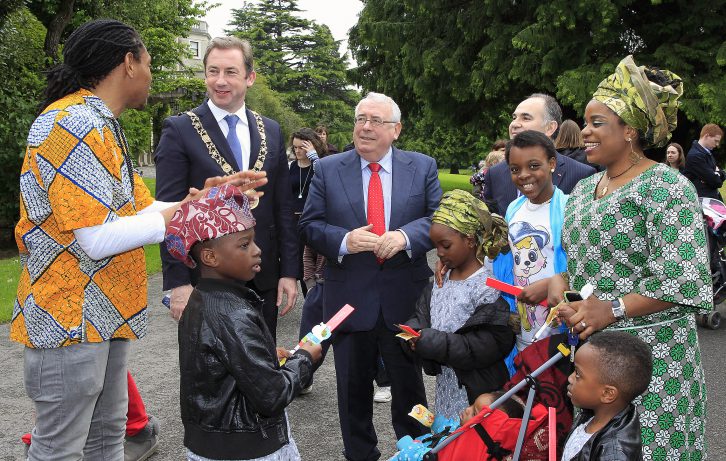 Minister for Trade and Development, Joe Costello TD, along with the Dean of the African Corps and Ambassador of Morroco, H.E. Mr Anas Khales (pictured above with the Lord Mayor of Dublin, Oisin Quinn and Africa Day visitors), spoke at the Main Stage in the afternoon about the importance of the Africa Day festivities and Ireland’s partnership with African countries in fighting poverty, hunger and our growing trade and economic partnerships.

Here are some media highlights from Africa Day 2014: 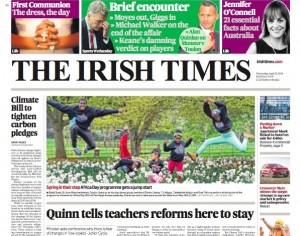 who performed at the Malaika stage at this year’s festival. This year’s Miss Africa Ireland winner and runner up were also there to help us launch this year’s event, with both getting front page attention on the Irish Times and the Dublin City Gazette.

On Wednesday 21st May, LeCool interviewed on of our Africa Day participants, Ebun Akpoveta of the Unforgettable Women’s Network.

On Thursday 22nd May, one of our headline Main Stage Africa Day performers, Colours Afrobeat Foundation, featured on the RTE Radio 1 Arena show to speak about their Africa Day performance, their musical inspirations and to perform on the show. 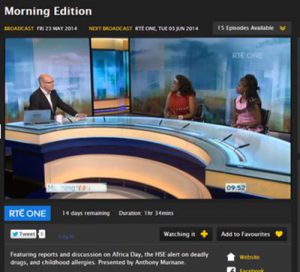 Nantale were on RTÉ One – Morning Edition to talk about Africa Day and their involvement in it to promote the event.

On the Saturday before Africa Day, the amazing ‘Nasty by Nature’ crew 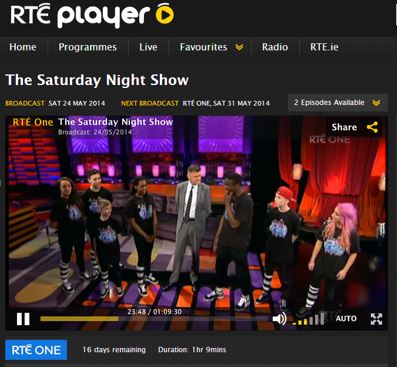 from Fit Kids / Fit Teens appeared on the RTÉ One – Saturday Night Show, to talk about their upcoming performance at Africa Day and their recent qualification into the World Hip Hop Championships, good luck guys! Brendan O’Connor spoke to Onai Tafuma and Clinton Liberty on the show.

On Africa Day itself, ‘Talking Books’ featured a special on West African literature focusing on writers from Senegal and Nigeria.

And finally, during the week in the lead up to Africa Day 2014, six columns written by Africa Day participants appeared in The Journal.ie: 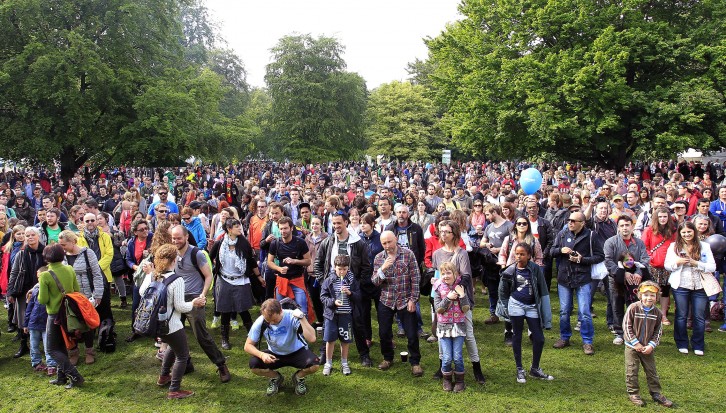