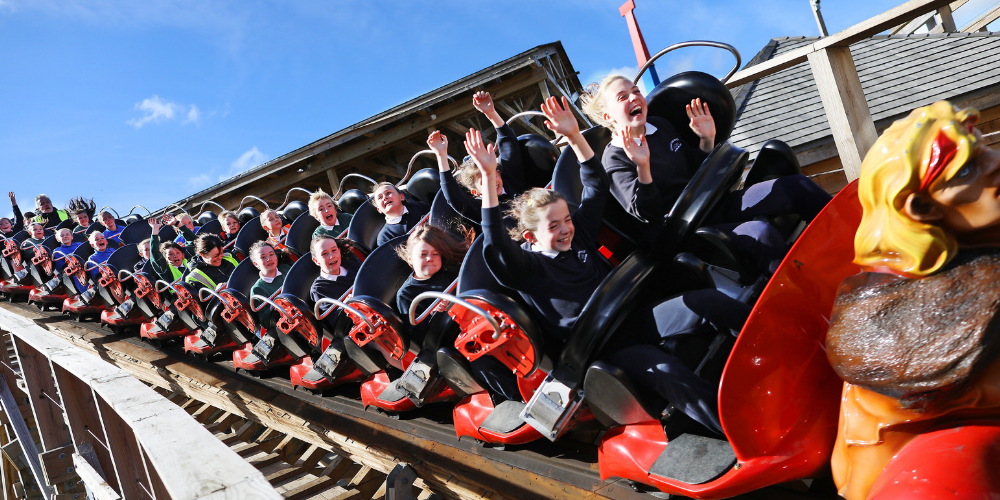 The largest patron of Irish medium schools in Ireland, An Foras Pátrúnachta (AFP), has marked its 25th anniversary by bringing together the largest ever gathering of Gaelscoil pupils for a takeover of Tayto Park Theme Park & Zoo, Co. Meath.

Some 5,000 2nd to 6th class pupils from AFP schools all across Ireland travelled to Tayto Park to celebrate the milestone of their patron. The students had exclusive access to attractions such as the Cú Chulainn rollercoaster, the extreme climbing wall, the Viking voyage and Mr Tayto’s pony trail.

Speaking at the event, All Ireland-winning Dublin footballer, avid Gaeilgeoir and AFP ambassador, Ciarán Kilkenny said: “Today is a brilliant occasion for the newest generation of Gaeilgeoirí to come together and have fun together outside their school environment, while speaking Irish. It is hugely import to ensure that our language is not left at the school gate, and I really admire AFP’s efforts in this area over the last 25 years. I’m delighted to be here today to join in the anniversary celebration.”

Since its foundation in 1993, An Foras Pátrúnachta has sought to develop, strengthen and promote Irish-medium education, and cultivate a strong and proud community of Irish speakers. Over the last 25 years, the number of schools under its patronage has grown from three to over 70, currently educating more than 16,000 students.

Commenting, General Secretary of An Foras Pátrúnachta, Caoimhín Ó hEaghra said: “An Foras Pátrúnachta has played a pioneering and pivotal role in the growth of Irish-medium education over the past quarter of a century. We support our schools in providing excellent education and in creating and fostering an Irish speaking community, and continue to innovate in how we do this. Last year, we launched a major new initiative to advance multilingualism across our nationwide school network, with a view that pupils will leave primary school proficient in three languages.

“Our pupils come from a wide variety of ethnic, cultural and socio-economic backgrounds. This celebration here at Tayto Park is an opportunity for them to have fun, forge new friendships with fellow young Gaeilgeoirí, and see the depth and breadth of the Irish-speaking community they are part of.”

Earlier this month, AFP announced its intention to apply for 13 new primary schools due to open in 2019, as part of its Gaelscoil4All campaign.

Mr Ó hEaghra added: “Today An Foras Pátrúnachta is the patron for 71 schools but we look forward to growing that number to over 100 in the coming years as the very significant demand for Irish-medium schools is finally realised in the education system.”