Subscribe For News
Home » DHR News » Over half of Irish consumers now get their news via social media sites – Reuters Institute Report
June 15, 2016 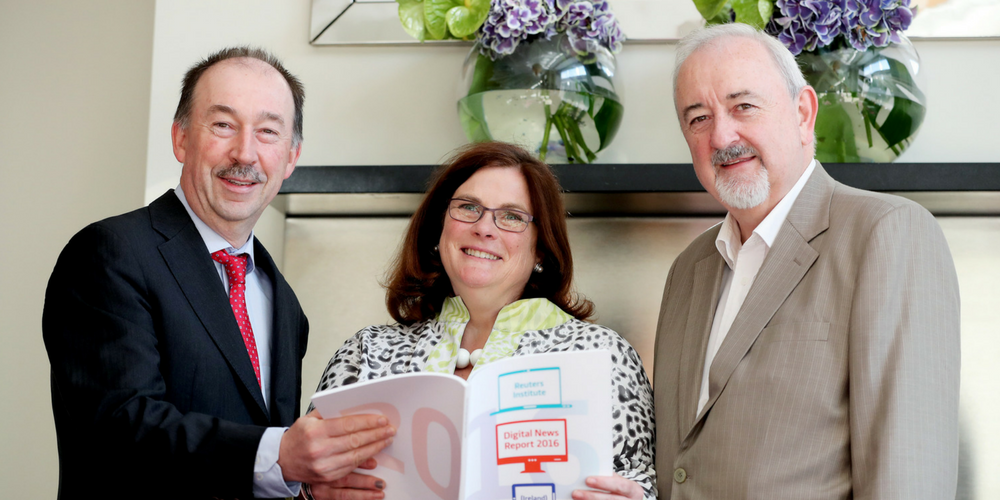 International research published today (15.06.16) by the Reuters Institute has found that over one in ten (12 per cent) say social media is their primary news source.  In Ireland, over half of consumers surveyed (52 per cent) get their news through social media sites.

Now in its fifth year, the annual Reuters Institute Digital News Report, published by the Reuters Institute for the Study of Journalism, highlights the widespread use of smartphones, the growth of news on social media, and the rise of ad blockers.

This is the second year that the Broadcasting Authority of Ireland (BAI) has funded the inclusion of Ireland in the Reuters Institute Digital News Report, as part of its work on media plurality in Ireland.  Data relating to Ireland has also been the subject of a more detailed and specific report on the Irish results of the survey, undertaken by the Institute for Future Media and Journalism (FuJo) at Dublin City University and commissioned by the BAI.  The data for the research was collected between January–February 2016, reflecting the same data collection timeframe for previous years.

Key points arising from this research include:

Social media: Facebook is now Ireland’s most popular social media site, with 71 per cent using it regularly and 45 per cent using it as a source for news.  Participation in online news is also high in Ireland, with 72 per cent frequently rating, sharing and commenting on online news stories.  However, only 23 per cent of Irish consumers recognise the news brands responsible for content on social media. This would suggest that news publishers are increasingly dependent on social media to distribute content.

Platforms:  TV remains the most popular platform for accessing news in Ireland, at 73 per cent, although this marks a 3 per cent decline on the 2015 figure.  Social media as a news platform rose by 3 per cent to 52 per cent when compared with the 2015 survey.  Radio and print have declined slightly at 47 per cent and 45 per cent, respectively.  The continuing rise in social media as a platform for accessing news and the decline in the more traditional platforms raises a number of issues in relation to access to, and funding for, quality news content into the future.

Paying for News: As sales of printed newspapers continue to fall, 71 per cent of Irish consumers are unwilling to pay for online news. Among those who do pay for news, 49 per cent pay less than €50 a year. The widespread availability of free news in the global English-language market is a notable influence on payment rates.  No English-speaking country has a news payment rate of more than 10 per cent.

Ad Blockers: While 42 per cent of consumers say they are willing to view ads in return for free access to news, more than half of Irish consumers (54 per cent) find adverts on news sites intrusive.  The popularity of ad blockers presents a significant challenge for publishers relying on digital advertising revenue.  Among the 26 nations surveyed, Ireland has the fifth highest level of ad blocker use, at 30 per cent. More than half of 18 to 24 year olds use some form of ad blocker.

Trust: Trust in news is highest among over-55s.  Half of those surveyed do not trust the news in general. In line with international findings, the Irish trust editors and journalists (37 per cent) less than news organisations (47 per cent).

News Consumption Routines: News consumption is high in Ireland across all demographics, with 84 per cent of people accessing some news every day and 53 per cent accessing news several times a day.  Traditional media is still deeply integrated into Irish news consumption routines.  TV news remains the most popular platform for accessing news in Ireland, at 73 per cent – although this is down 3 per cent compared to 2015.  Radio remains the first point of daily contact with news for 39 per cent of consumers. However, social media and mobile devices are influencing new consumption patterns.  Among those who use smartphones in the morning (21 per cent), 50 per cent find news on social media sites, while 30 per cent go directly to a news app or news website.

Online News Video: Despite sector expectations, video content is not attracting large numbers of news consumers.  Only a quarter (24 per cent) of international respondents say they access online news video.  The Irish (28 per cent) are more inclined to watch video news than many European peers.  However, those who do not regularly watch news video attribute technical issues (46 per cent), the convenience of reading (39 per cent), and a dislike of pre-roll adverts (24 per cent) as factors.

Commenting on the Irish results of the survey, Dr Jane Suiter, director of FuJo, said: “The Digital News Report puts Irish and international trends in perspective. Worldwide, the popularity of smartphones and ad blockers has created a powerful role for Facebook while presenting some significant difficulties for publishers.”

Michael O’Keeffe, BAI Chief Executive, noted: “From the BAI’s perspective, the provision of well-resourced news and current affairs and the facilitation of conversation and debate are important safeguards in a democratic society. Over the past number of years, the BAI has sought to lead and contribute to the debate on plurality in Irish broadcasting.  Today’s research findings pose a number of challenges with regard to both the points of access to, and the sources of, news for citizens in Ireland.  The BAI is currently in the process of developing its new strategy for 2017-2019 and research reports such as the one launched here today will play an important role in informing our thinking in this area.”