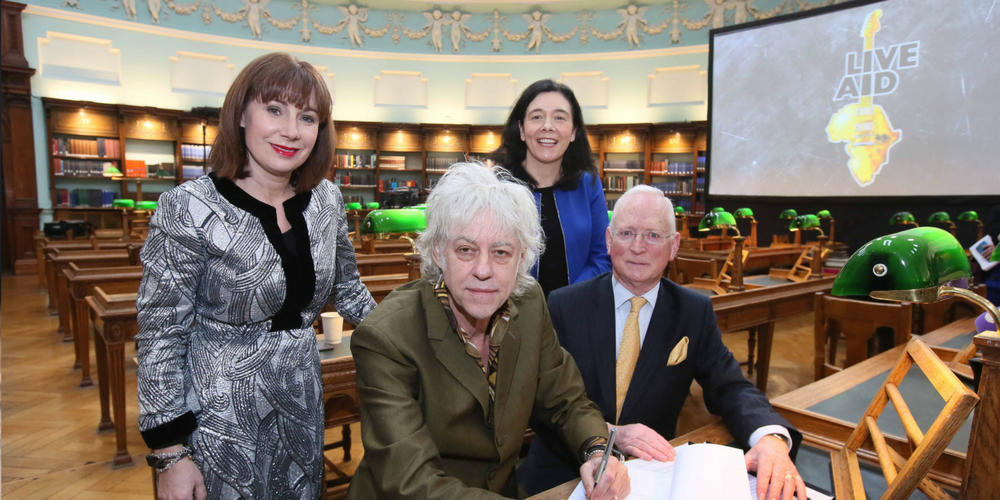 The National Library of Ireland (NLI) is to bring the Band Aid archive to a worldwide audience with plans to digitise a vast collection of letters, photographs and charity records from the iconic 1984 fundraiser. Band Aid founder, Bob Geldof, and Minister for Culture, Heritage and the Gaeltacht, Josepha Madigan TD were at the Library to officially announce the donation of the archive by the Band Aid Trust. A commitment of €245,000 in digitisation funds from the Department of Culture, Heritage and the Gaeltacht to facilitate the development of the archive by the National Library was also announced.

Band Aid was a worldwide phenomenon in the mid-1980s. The supergroup, formed by Bob Geldof, brought together more than 40 of the top musical artists of the 1980s, including U2, Ultravox, Bananarama, Duran Duran and Geldof’s own band, The Boomtown Rats. Band Aid’s ‘Do They Know It’s Christmas?’, co-written by Bob Geldof and Midge Ure, is one of the most popular Christmas songs ever released and has been generating royalties for the Band Aid Trust every Christmas since its release in 1984. The UK and US Live Aid concerts on 13th July 1985 were among the defining events of the decade and an unforgettable television event.

When the Band Aid Trust closed its offices in 1991, it put all its paperwork and files into a 100-square foot storage unit in London. This collection will now be transferred to the NLI, where it will be catalogued, preserved, selectively digitised and exhibited. Many will be familiar with large parts of the Band Aid story but it is in the archives that the full picture emerges.

It shows the commitment of many entertainment and political figures, but perhaps most importantly, it reveals the vast organisation that was needed, set up and then gradually dismantled – capturing the work of all those who looked after the fleets of ships and trucks, the schools and orphanages and hospitals, the food and medicines and grants of aid monies, and ensured these were scrutinised, implemented, reported upon and vetted, checked and verified.

Commenting on the donation, President Michael D. Higgins said: “As President of Ireland, mar Uachtarán na hÉireann, may I welcome the gift of the archive of Band Aid Trust to the National Library of Ireland.  It is a most thoughtful and generous gesture that will be appreciated for generations.

“It is the decision of the National Library not to just accept the archive but to arrange a major exhibition at the National Photographic Archive that is to be particularly welcomed, as is the fact that the public will be able to view these unique archives free of charge.  It is also heartening to learn that consideration is being given to a travelling exhibition of the archive.”

An Taoiseach, Leo Varadkar said: “This donation of the Band Aid archive is a huge gift to the State. Band Aid was a milestone of that era. It showed Ireland and in particular an Irishman taking the lead in tackling hunger and injustice, and it built on the work of so many missionaries and NGOs, many of whom continue to fight global hunger. I hope everyone will make their way to the National Library to view this seminal archive.

“This must also be a reminder that global hunger remains a challenge for all of us, and one on which Ireland continues to take an international lead. The archive will play a significant role in engaging public discourse on resolving what continues to be a global plight. As Taoiseach, I am deeply grateful that this archive will have its home in Ireland, and in the National Library where it can be accessed by everyone at home and abroad. And it has really brought home to me the importance of increasing Ireland’s contribution to Overseas Development Aid.”

Speaking today, Bob Geldof said: “By donating our story to the National Library of Ireland we enable other generations to study and hopefully be inspired for the future. Despite approaches and negotiations with other national institutions the Trustees finally settled upon Ireland as the archive’s natural home because of the Library’s understanding and commitment to the archive, the extraordinary commitment of the Irish people to the entire Band Aid undertaking and their magnificent and unprecedented fundraising response to the records and concerts and finally their exceptional NGOs and government’s commitments to the ideas and ideals of Band Aid itself.

“This then is our thanks and gratitude to Ireland and the Irish. We want you to use this gift for the benefit of those in whose name we too will continue to work. Our work will only be complete when there is no money left. But every time that record is played, every time our films are shown or sold, every time some kind person leaves us some money on their death, every time someone covenants part of their wage, then we continue. This gift is not a Band Aid “au revoir” but rather our continuation. We are proud to give this to you. Make use of it and enjoy a story of what is possible.”

Director of the NLI, Dr Sandra Collins commented: “The Band Aid archive is a wonderful and remarkable acquisition for the National Library, and we are very grateful to Bob Geldof for having proposed the donation. His role as a founder of Band Aid is a source of great pride in Ireland and the central part played by Bob and U2 in the London Live Aid concert gave Irish fans a strong sense of connection with the event.

“We are excited to have the opportunity to preserve and make available this treasure trove of contemporary social and civic memory. The abundance of correspondence received from people of all ages and walks of life illustrates the remarkable response by the public to the Band Aid appeal. I’m sure the archive will be of great interest nationally and internationally, and this major project will culminate in an exhibition of these evocative materials in the National Library.”

Minister for Culture, Heritage and the Gaeltacht, Josepha Madigan said: “I am pleased to provide funds to develop this important archive, which illuminates the Irish role in Band Aid and Ireland’s outstanding tradition of charitable donation. Watching Live Aid from Ireland, one of the key moments during the Wembley concert was when Bob Geldof announced that Ireland’s donations were the highest per capita, despite the country’s challenging economic situation.

“I’m delighted that the new cultural Digitisation Scheme and the Creative Ireland programme can support the delivery, cataloguing and digitisation of this unique archive. It is a remarkable record of how the charity helped to achieve change in Africa, and to attitudes in the rest of the world.”

Chair of the National Library of Ireland, Paul Shovlin commented: “We are very grateful to Minister Madigan and her Department for providing funding under the Creative Ireland banner to maximise the use of this wonderful archive. The acquisition of the materials by the Library means that they can be kept together in one place, and made available to researchers and members of the public in perpetuity.”