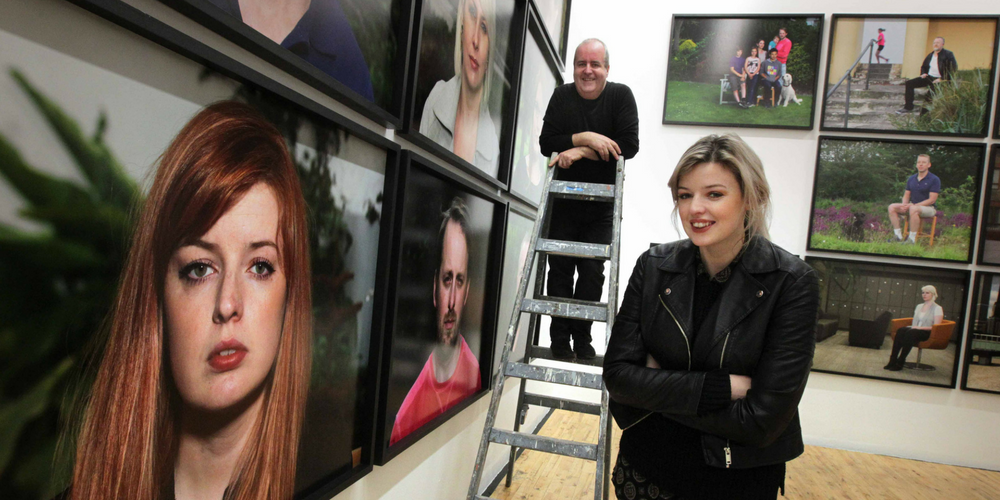 ‘Beyond Leaving’ exhibition opens to public

The National Library of Ireland (NLI)’s National Photographic Archive has just officially launched ‘Beyond Leaving’, the final part of a suite of works by Dublin-based photographer David Monahan that revolve around the most recent wave of emigration from Ireland.

The exhibition takes a close look at a small group of those who left Ireland during the downturn and features a series of more than 20 large scale photographic works shot this year on location in Dublin, Toronto, Ohio, Chicago, Surrey and Wicklow. It also includes video recordings, interviews and a number of artefacts gathered over the duration of the project. These artefacts include a chronological notebook of all works of the original series ‘Leaving Dublin’, and notebooks and field notes made during the study.

‘Beyond Leaving’ is the most recent expression of a collaborative project ongoing since 2010. In 2012, the exhibition ‘Leaving Dublin’, which captured emigrants on the eve of their departure from Ireland, went on show at the National Photographic Archive. Subsequently, Monahan followed some of the emigrants around the globe, meeting them in their new locales and shooting new work in the process. This work culminated in the award winning book ‘On Leaving’.

As a result of a collaborative approach borne out of a research project initiated under IADT Dun Laoghaire’s Masters by Research programme, Monahan has created an exhibition which seeks to find and fathom the distance between the expectations of recent emigrants upon leaving Ireland, and the reality of their lives today.

Speaking at the exhibition launch, David Monahan commented: “As part of this project, I have documented the departure of more than 120 people as they left Ireland in the aftermath of the global financial crash. Earlier this year, the Central Statistics Office made the announcement that to the year ending April 2016, there was a return to net inward migration for the first time since 2009. The legacy of the financial crash and the resultant severe period of austerity which saw the outward movement of more than half a million people will resonate for some time to come, and many more will still feel the need to emigrate in the future.

“Against this backdrop, ‘Beyond Leaving’ takes an intimate look at the circumstances of a small group of Irish emigrants who left at the height of the recession, some who have settled elsewhere, and some who have since returned home. Through my research, I sought to evoke the precarious nature of modern life by offering glimpses of how those who did leave Ireland are faring, and how the reality of their lives now compares with their expectations before they left.”

Dr Sandra Collins, Director of the National Library of Ireland, added: “We are delighted to welcome David Monahan back to the NLI’s National Photographic Archive today with his wonderful exhibition ‘Beyond Leaving’, more than four years after ‘Leaving Dublin’ debuted in this venue to great acclaim.

“Emigration remains such an important and emotional part of the Irish experience, and the National Library’s role is to collect and share the Irish story with people in Ireland and our diaspora across the world. Many people who left Ireland over the last number of years have since established their lives elsewhere and ‘Beyond Leaving’ offers us a very sensitive and immediate insight into their journeys and where they are today.”

‘Beyond Leaving’ is free to visit, and is open seven days a week. Opening times are from 10am to 5pm, Monday to Saturday and 12 noon to 5pm on Sundays. The exhibition will run in the NPA until March 2017.