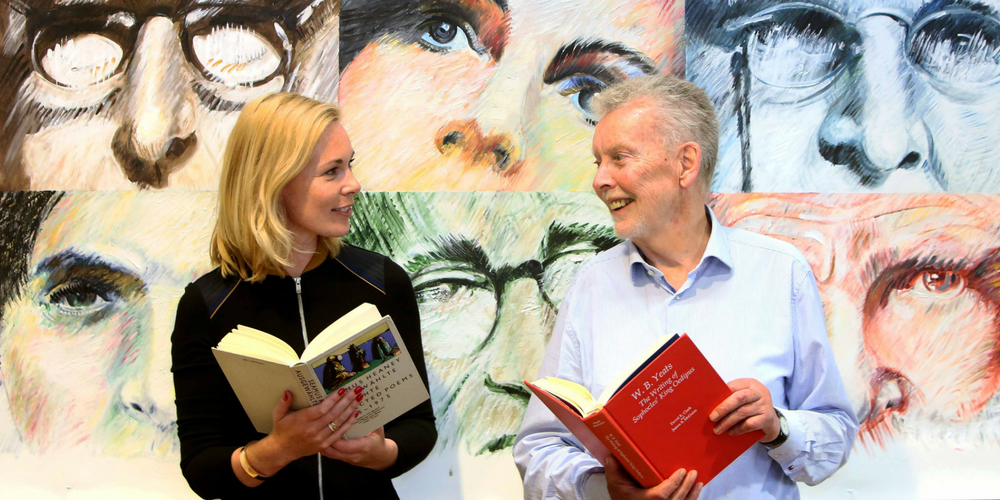 The National Library of Ireland (NLI) has today (20.06.17) announced receipt of a painting by acclaimed Danish artist, Claus Havemann. Entitled “Irish Eyes” Poets and Writers, the piece is inspired by the eyes of a number of Ireland’s most prolific writers and poets.

The donation was unveiled by renowned teacher, critic and broadcaster Niall MacMonagle at a special event in the NLI’s lecture theatre, where the painting will be permanently displayed. The writers and poets shown in the painting, in order of appearance, are: Samuel Beckett, Molly Keane, James Joyce, Seamus Heaney, Flann O’Brien, Elizabeth Bowen, Patrick Kavanagh, Edna O’Brien, W.B. Yeats, Kate O’Brien, Frank O’Connor and G.B. Shaw.

Claus Havemann, who has had a studio in Cork for almost forty years, has exhibited widely in Ireland and Denmark. In 2016, he donated a painting featuring the eyes of prominent figures from the Easter Rising to Richmond Barracks.

Speaking at the unveiling, Mr Havemann said: “I’ve always felt that you can tell a lot about a person through their eyes, that in many ways they are the gateway to the soul. In this painting, I’ve tried to capture something of the essence of these great Irish writers and poets.

“Ireland has been my second home for almost half my life and during that time I have developed a great affinity with the country, its people and its culture. This donation is an expression of my gratitude to Ireland for all the hospitality I have received. I’m delighted that it will have a permanent home here in the National Library, a place from which many of the writers featured in my painting drew inspiration.”

Commenting on the donation, Director of the National Library of Ireland Dr Sandra Collins said: “We’re honoured and delighted that Claus Havemann has chosen to donate this wonderful painting, which celebrates some of Ireland’s literary greats, to the National Library of Ireland. We look forward to welcoming visitors from around the globe to the NLI to enjoy this painting, and to experience all the literary delights that the Library has to offer.

“This painting is a wonderful reflection of how Ireland’s creativity inspires artists worldwide.  It resonates strongly with Creative Ireland in demonstrating Ireland’s global reputation through our arts and culture, and we welcome Minister Humphreys’ continued strong leadership of this important national initiative.”