DHR Communications is currently working with the development NGO Trócaire on the delivery of a special Central American-flavoured gig to thank people who supported Trócaire’s ‘Keep Digna Safe’ Lenten campaign and to raise awareness of the organisation’s work in Honduras and other countries. 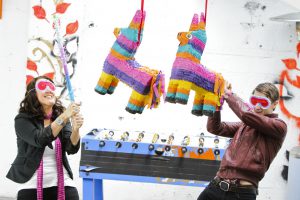 2FM's Ruth Scott & Joey Lynch from The Hot Sprockets try their hand at bashing a pinata at the launch of the 'Thanks, from Trócaire' gig.

The gig is taking place at The Grand Social, 35 Lower Liffey Street, Dublin 1 this coming Thursday, 23rd June, from 7pm ’til late.  Alternative / electronic quartet  CODES will headline the event, where they will be joined by blues-rockers The Hot Sprockets and rising Irish five-piece Storyfold.  Tig Linn – a collective with members from Kíla, Discovery Gospel Choir and the Afro-Irish music group De Jimbé – will open the gig, while acoustic performances by a variety of acts will take place throughout the venue over the course of the night.  2FM’s Ruth Scott will be the special guest MC for the night, and the gig will close with a DJ set by internationally acclaimed DJ iZem.

To add a Central American flavour to proceedings, Latino guitarists will be on hand, while Honduran-inspired snacks will be cooked to order in the outdoor beer garden.  Games and crafts from Central America will also be on show.

Tickets for this gig – costing only €5 – will be available on the door on the night.  However, DHR Communications has some pairs of tickets to give away over the coming days.  To be in with a chance to win a pair of tickets, just email your contact details to trocaire@dhr.ie before 9am on Thursday (23rd June).  We’ll announce the winners on Thursday morning.  In the meantime, you can find out more about the gig – and about Trócaire’s work in Central America – at: www.trocaire.org.

2 thoughts on “Competition: Win Tickets to ‘Thanks, from Trócaire’ Gig”