Subscribe For News
Home » DHR News » Years of rising rents points to a rental market creaking at the seams
August 17, 2018 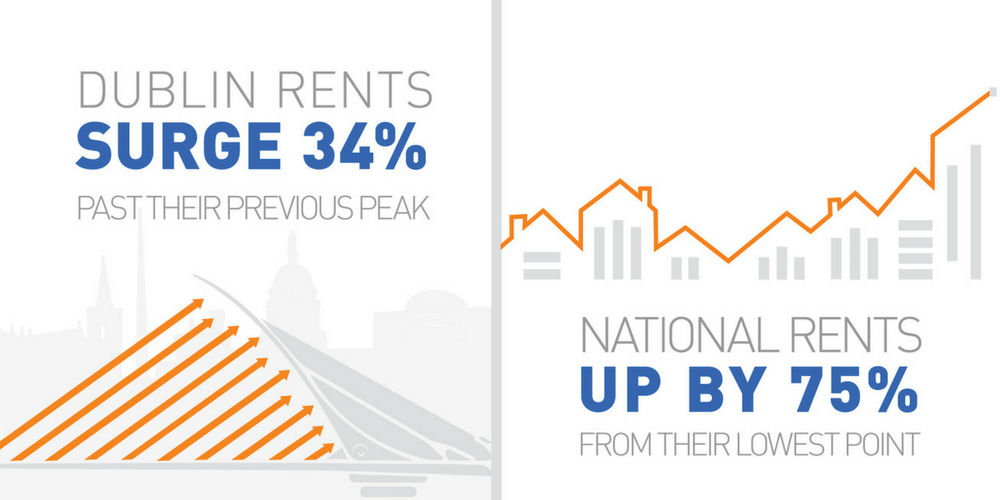 Real and effective rent transparency measures need to be introduced, along with the creation of sustainable urban communities, if the Government is to begin to make any progress on tackling the ongoing crisis in the private rented market. That’s according to national housing charity, Threshold in response to figures from the latest Daft.ie Rental Price Report, released. The report, which covers the second quarter of 2018, indicates a 12.4 per cent increase in rents nationally in the year to June 2018, once again pushing rents to an all-time high of €1,304, on average.

Commenting, chief executive of Threshold, John-Mark McCafferty said: “It is abundantly clear that the housing market is broken. Consecutive governments have done little to stop this, leaving families right across the country struggling to keep a roof over their heads. Private rents have doubled in some areas of Dublin since 2011, and more recently rents in cities such as Waterford and Limerick have risen by around 20 per cent – far faster than average wages – which means people are increasingly struggling to pay their rent. Fear of homelessness is a real issue for many of Ireland’s renters: of the more than 7,000 people who contacted Threshold’s Tenancy Protection Service so far this year, 47 per cent were querying rental terminations, rent reviews, rent increases and receiverships.”

Currently, the law provides that a tenant is to be informed of the previous rent but there is nothing to ensure this. For this reason, Threshold is urgently calling for real and effective rent transparency measures to hold landlords to account and give potential and sitting tenants the details they need to make informed choices or to challenge an illegal rent setting at the Residential Tenancies Board. The Government recently announced legislation to address this issue, however, it would appear that the intention is only to publish average rents for a given area rather than at individual tenancy level. It is Threshold’s view that the devil is in the detail – we believe that the provision of more granular information is the only way to empower tenants with the knowledge they need to vindicate their rights.”

Chair of Threshold, Aideen Hayden said: “Over the years, an ideology that has equated social housing with dependency, and home ownership as morally superior has now left generations struggling to access either. For more than 40 years, Threshold has been to the fore in campaigning for better standards and greater rights for tenants. Renting in the private sector is increasingly the tenure of choice, as well as being the only option for those excluded from social housing and owner occupation, and we need strong measures to protect tenants more than ever.  We need to actively rethink the future of our towns and cities; we must act with foresight to create resilient and liveable communities. Above all, we urgently need politicians of all parties to sit up and take notice of the rising numbers of renters struggling, and they must ensure that they do all they can to protect them.”