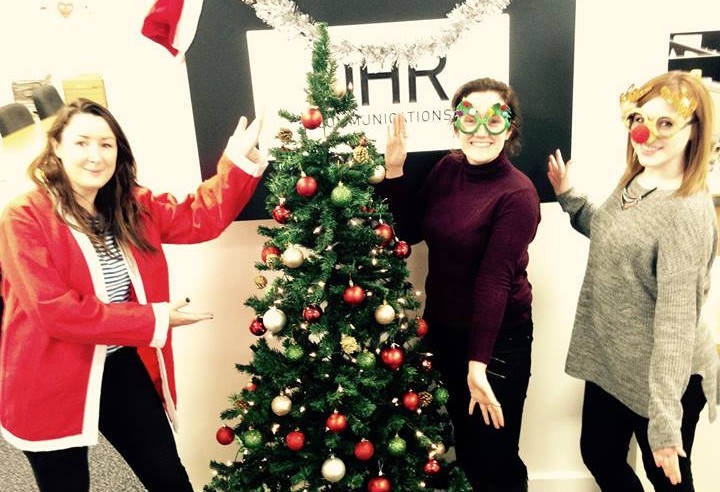 The team at DHR share their plans for the holiday season, reminisce on the year that was, and talk about hopes and wishes for 2016!

I’m planning on spending Christmas in the wilds of the Thurles outskirts, eating my body weight in food and going for nice country walks with the dog! And my family too, I guess…

I’m wishing for a relaxing Christmas, catching up with family and friends I haven’t seen in a long time. And for Santa to come up trumps, of course!

2015 had quite a few memorable moments!  Africa Day was definitely a highlight, we were blessed with glorious sunshine this time round and there was a super atmosphere all day. Feeling like a fashionista working at NCAD’s annual Fashion Show.  Another moment was our late-night pizza party in the office while in the midst of Inspirefest preparation.

My plans for the festive season include lots of sleep; a start to training for my spring marathon; and a few good reads and observing the joy of being a seven year-old through my son.  All under a blue sky, a little closer to the equator.

My most memorable moment of 2015 was delivering a lecture at Columbia University.

I hope that we return sensible and pragmatic politicians to lead a stable Government after the general election in 2016.

I’ll be flying home to Germany next week and I look forward to spending time with my family, catching up with old friends, and eating lots of Platzchen, Lebkuchen and Kartoffelsalat. I’ll also be travelling to India and Sri Lanka and look forward to starting 2016 sitting under a starry sky in a Keralan tea plantation!

I’m wishing for snow – lots of it!

Although there were a lot of memorable moments in 2015, the most memorable moment for me was launching the BeLonG To YES campaign in March. There was a great sense of excitement and enthusiasm in the air and the momentum that was kicked up that day was carried right through to the referendum in May.

My hopes for 2016 are to stay healthy, spend more time with family and friends and to finally make proper use of that gym membership that I’ve been paying for since the last New Year!

My plan for Christmas is to head home to Donegal to spend with my family, go for lots of walks on the beach and enjoy my Mammy’s cooking!

I’m wishing for lots of fun with friends and family.

Obviously starting with DHR and meeting all of my lovely colleagues was the highlight. Also, arriving at Farmleigh the day before Africa Day and seeing it all set up. It was great to see in reality what had lived only in our minds for the previous few months.

I am hoping for a healthy and happy year for everyone I know.

My plan for Christmas is to have fun catching up with friends and family, stuff myself full of festive foods and organise my trip to London in January.

I’m wishing for a fun-filled Christmas with plenty of catching up with friends and family!

I’ve really enjoyed my entire time here as an intern in DHR, but one particular moment that has really stuck out for me was being involved in the Mary Raftery Journalism Fund’s documentary film making event in the IFI. I got to meet one of my favourite authors!

I’m looking forward to spending time with family and friends over this festive season, and ringing in the New Year in Lisbon!

I’m hoping to catch up on some reading and watching classic Christmas movies.

It was an honour to work on the Register to Vote campaign with Marriage Equality this year, it meant a lot to feel like I had played a part (however small) in contributing towards a positive outcome for the Marriage Referendum in May.

My hope for 2016 is that the eighth amendment of the Constitution will be repealed.

I am really looking forward to the Christmas break this year. It is always a great time of year to catch up with pals and family who I haven’t seen in a while. And of course I’m sure I will indulge in one or two mince pies at some stage.

2015 closes on a very positive note for me. It has been an exciting six months since commencing work with DHR. I have worked on some great projects since joining the DHR Team including launching Healthy Ireland’s website, helping the ESB celebrate 10 years of Corporate Social Responsibility and assisting the Environmental Protection Agency in their research on how they can improve their communications channels.

Looking towards 2016, I hope an election is called early in the New Year and that the people of Ireland elect a stable government with a strong mandate. I am looking forward to engaging with new projects and clients in DHR throughout the year and of course I would love to see Ireland do well in the European Championships and the Olympic Games this summer.

I’m planning to spend quality time with my twin nieces and nephew over Christmas before heading to Kerry to catch-up with friends!

I’m wishing for peace and happiness for all. And for Man United to start winning again. In that order ;)

My most memorable moment of 2015 was, without doubt, Africa Day. After months of planning and weeks of obsessing over the weather forecast, the day went perfectly. Brilliant sunshine, wonderful performances and a fantastic crowd. Couldn’t have asked for more than that!

My hopes for 2015 are to complete my third Hell & Back race and to explore some more of the world! 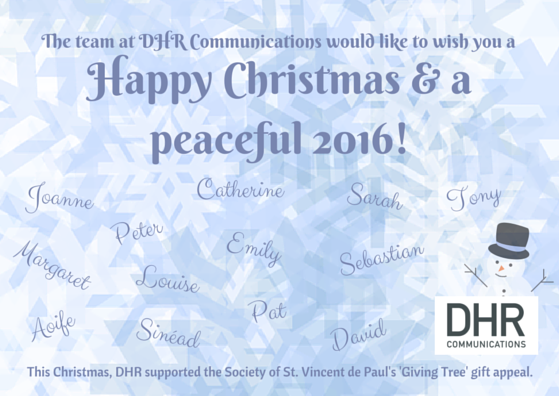