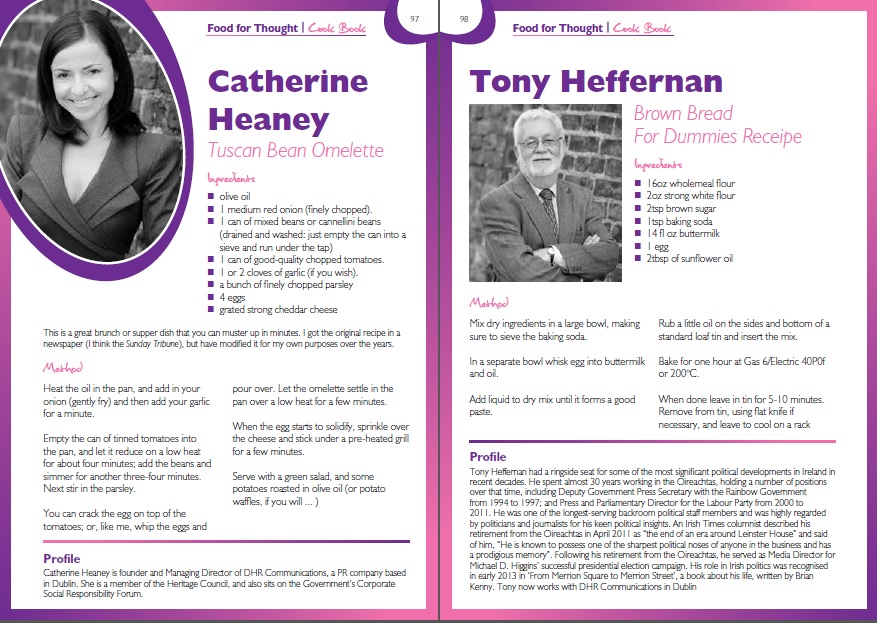 Two of DHR’s senior management team – our Managing Director, Catherine Heaney, and Tony Heffernan, one of our Account Directors – are featured in a new cookbook, ‘Food for Thought’, which is being published to raise funds for cancer support services.

A host of famous faces from the worlds of sports, music, politics and the arts have contributed their favourite recipes for the cookbook, which will be officially launched tomorrow, Friday, 6th March.  In addition to tasty suggestions from Catherine and Tony, the book features recipes from renowned authors Colm Tóibín and Jeffrey Archer; sports heroes Tommy Bowe, Shane Lowry and Niall Quinn; actor Pat Shortt; musicians Phil Coulter, Frances Black and Úna Healy; and An Taoiseach, Enda Kenny TD, amongst others.

The ‘cookbook with a difference’ is the brainchild of Tipp-woman Eileen Coffey, who compiled all recipes and published the book to raise funds for the Suir Haven Cancer Support Centre in Thurles.  Eileen has a very personal connection to Suir Haven: her late father, Paddy Corbett, was diagnosed with terminal cancer in 2012, and her family were supported by the Suir Haven Centre in the wake of his death.  Sadly, Eileen had lost her mother, Bridie, as a result of a road traffic accident only 10 months prior to losing her dad.

Commenting in advance of tomorrow’s launch, Eileen said: “The Suir Haven Centre, which is based in my hometown of Thurles, provides support for those affected by cancer and their close family members.  It does amazing work every year, and I have benefited from that first-hand: it provided me with invaluable support after losing both my parents.

“Compiling these recipes and publishing this cookbook is my way of saying ‘thanks’.  All proceeds raised from the sale of the book will go directly to funding the Suir Haven Centre’s important work.”

Other famous faces that contributed recipes to the book include:

Not surprisingly, given the book’s connections to the home of hurling, a number of GAA stars share their favourite recipes too, including:

‘Food for Thought’ will be launched tomorrow by Fionnbar Walsh, father of the late Donal Walsh. The launch will take place at the Ursuline Secondary School, Thurles, Co. Tipperary at 7pm.   The book will be on sale locally throughout Tipperary for €15, and can also be ordered directly by emailing Eileen Coffey (eileencoffey21@gmail.com) at a cost of €15 plus postage and packaging.