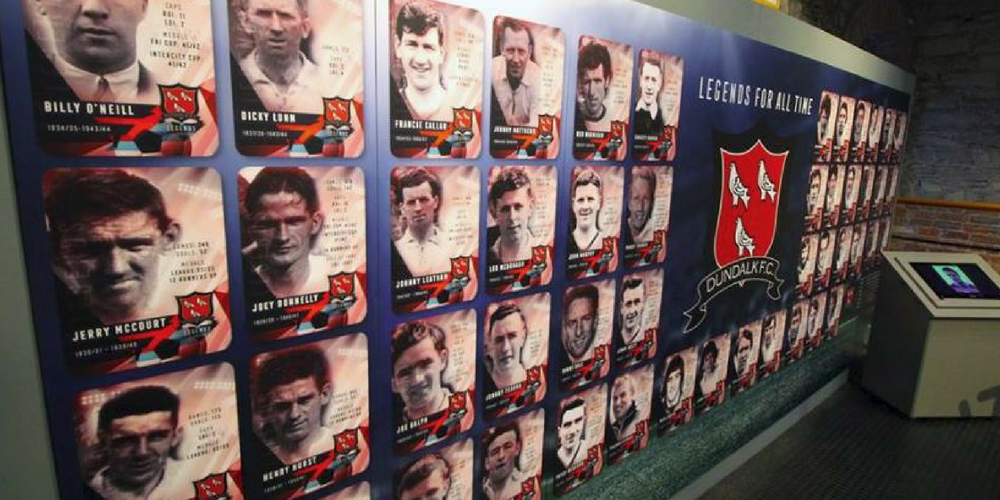 League of Ireland current champions Dundalk FC have been honoured in their home town with an exhibition at County Museum Dundalk celebrating the club’s history. Entitled ‘One Team, One Dream’, the exhibition was launched by former president of the FAI, Des Casey.

With more than 50 trophy wins – including 12 League Championships and 10 FAI Cups  – and success at European level in 2016, Dundalk FC has a rich sporting history. This is celebrated in the exhibition, which features a wall of 49 of Dundalk FC’s greatest ever players, including cult heroes Tommy McConville, Barry Kehoe and Jimmy Hasty. Brief biographical details of all players accompany the images on the wall.

Speaking at the launch, museum curator, Brian Walsh said: “We’ve been extremely fortunate to work with Jim Murphy, author of ‘The History of Dundalk FC – The First 100 Years’, to develop this exhibition.  While working on it, we’ve been struck how the club has been a rite of passage for many people – parents who brought their children to games, who in turn brought their children, who now bring their children and so on.  In a rapidly changing world, to have this tradition, this common interest and passion is something very valuable.”

Other exhibition highlights include:

The success of the team in Europe last year brought global attention to the club and led to it being presented with a civic award from Dundalk Municipal District in the same year.

Des Casey said: “I am delighted that County Museum Dundalk is hosting this exhibition. Dundalk FC has a fantastic history and is one of only three clubs with an unbroken membership of the League of Ireland. The heroic exploits of the Dundalk team in the preliminary stages of the Champions League and then Europa League last year shone a light on Irish football and brought it to new audiences. I hope football fans far and wide will visit and enjoy this exhibition.”

‘One Team, One Dream’ is open Tuesday to Saturday from 10am to 5pm at County Museum Dundalk, and entry is free.