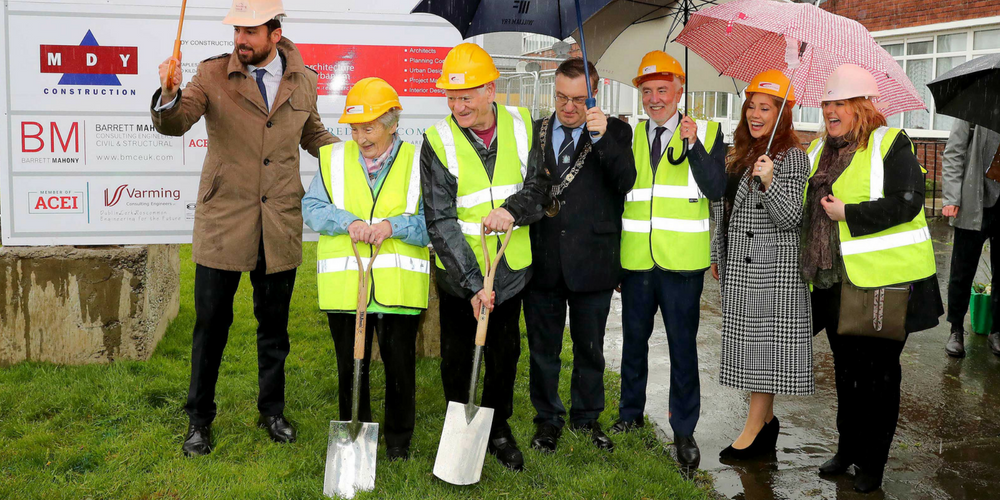 Housing association Fold Ireland has turned the sod on New Dolphin Park, a 43-unit, purpose-built development for older people in Dublin 8. The development, which is part of the State’s largest ever regeneration project, will be undertaken by Fold on a site transferred from Dublin City Council and will replace the existing senior citizens complex on the Dolphin Park site.

The new scheme, which is scheduled to be ready for occupation in early-2019, is being delivered by Fold in partnership with Dublin City Council and the Department of Housing Planning and Local Government. At today’s sod-turning ceremony, which was attended by Lord Mayor of Dublin / Ardmhéara Micheál Mac Donncha and Minister for Housing, Planning and Local Government, Eoghan Murphy, Fold outlined its plans for the development.

“The design of the new homes is the culmination of more than two years of collaboration and consultation between Fold, Dublin City Council, the residents of Dolphin Park and the wider community.  The residents are at the heart of this collaboration and we listened to their ideas and aspirations for their new homes, mindful to incorporate the best principles of design and usability”, said Fold’s Development Manager, Tina Donaghy.

“The one-bed apartments will be fully accessible and will each be equipped with Fold’s technology platform Telecare, which, among other things, provides 24-hour assistance and reassurance for residents, should they need it. We are delighted that construction is now getting underway and look forward to welcoming the residents into their news homes early next year.”

Dolphin House and Park is Dublin’s largest public housing complex.  It was built in 1957, sits on 18.5 acres and comprises 436 homes. The estate is undergoing enormous regeneration, which involves gutting and reconfiguring the old flats as well as the construction of new homes. Three new blocks will be built and two blocks of vacant flats are being demolished to make way for the new buildings.

Speaking at the sod-turning ceremony, Minister Murphy said: “The provision of high-quality social housing for older people is one of the key priorities of Rebuilding Ireland. This development is a tangible example of the Government’s commitment to that objective and follows the approval of funding for it by my Department in mid-2016. Regeneration projects such as this not only provide housing, they also contribute to social and economic renewal and inject new life into our communities.”

Ardmhéara Micheál Mac Donncha commented: “We, in Dublin City Council, are delighted to be working with the Department and Fold on making 43 new homes for senior citizens available on the Dolphin Park site in the near future. These purpose-built units will be constructed to suit the requirements of older people, promote positive ageing and independent living, and will be a very welcome addition to the wider regeneration of the area. Fold has a strong track record of providing high-quality supported housing for our senior citizens, and our collaborative approach has been very positive.”

Helen Lally (78) has lived in Dolphin House and Park for 64 years and will move into the new development in 2019. Speaking at the launch, Ms Lally said: “Having moved from Dolphin House flats to the original Dolphin Park complex for older people in 2017, I am now really looking forward to moving into our new facilities, which will be better designed for the needs of older people like me.”

Tony Hughes (71) has lived in the senior citizens complex in Dolphin Park for two and a half years and is also looking forward to moving into a brand-new home: “I think the new development is great. It’s an opportunity that people of my age don’t get – to move into something so modern. It’s great to be part of this and I’m looking forward to moving in when the new complex is finished.”