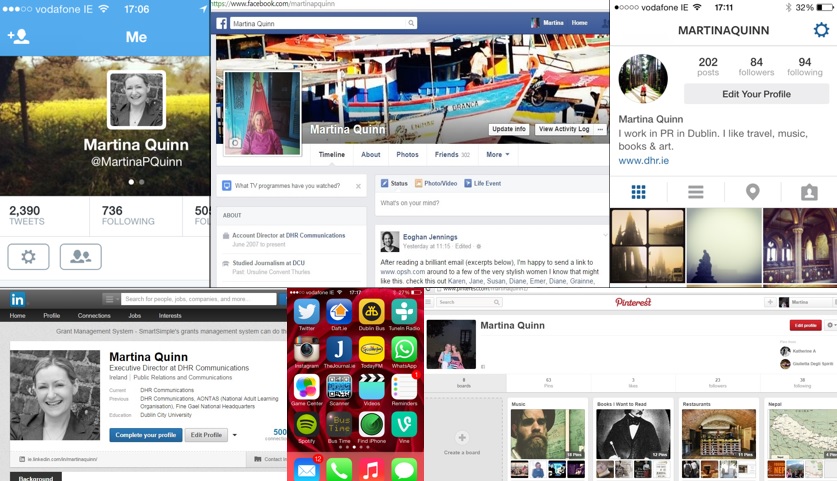 Four Top Trends in Social Media and their Implications for PR

As you may have read in our last post, I’ve been delivering training in social media skills quite a bit recently.

Discovering and exploring new online tools – and advising clients on how to use them in their work – is one of the things I like most about my job.

The fact that the social media landscape is continuously changing, however, presents challenges when it comes to training.  If I look back at training content I developed in 2011, for example, there’s no mention of Instagram or Pinterest and the demonstrations I gave about Twitter included showing people how to use external apps to upload photos to their feed.  It’s hard to believe now, but uploading photos with your tweets back then was an arduous task!

As part of the most recent round of social media training I developed, I gave an overview of current and emerging trends, these included:

The ‘traditional’ or ‘old’ media landscape was, in the past, dominated by a couple of giants, who essentially had captive audiences: RTÉ, the Irish Independent or The Irish Times in Ireland; BBC, The Telegraph and The Guardian in Britain.

As the 20th Century progressed, new print and broadcast media began to emerge. Growing up in ‘two-channel land’ in Tipperary, I still remember the excitement when TV3 was launched!  On the print side of things, specialist publications appeared, devoted to everything from interior design and weddings to music, fishing and cars.

This fragmentation of traditional media is now being mirrored across social media, with lots of niche and specialist platforms emerging.  While Facebook, Twitter, LinkedIn, Pinterest, Instagram and Google+ continue to hold considerable market share, many social media users are looking for more tailored tools and connections, for their niche interests.

No matter what your interests are, it’s likely you’ll now find a dedicated social media tool or network to suit.

As was the case when traditional media became fragmented, there are pros and cons from a PR perspective. On the plus-side, if you’re trying to engage with a very specific target audience, you can now find and connect with them using relevant niche social media sites.

The challenge presented by increased fragmentation is obvious, though: how do you reach your target audience if they’re not all in the one place? As the social media landscape continues to fragment, PR practitioners and individual organisations will need to become increasingly skilled at figuring out which social sites their target audiences use, and how to tailor communications campaigns accordingly.

For years, Facebook has been the dominant social media force, capturing a massive market share and buying up smaller entities that might potentially threaten its power (for example, it purchased the photo-sharing network Instagram for $1 billion in 2012, and the messaging service WhatsApp for $19 billion last February).

Facebook tends to be the social network of choice for organisations looking to promote their work: there are over 50 million Facebook pages in existence, promoting everything from schools to leading international brands.

The usage figures for Facebook are staggering: it has 1.32 billion monthly active users as of June 2014, with 829 million of those using Facebook on a daily basis.  In Ireland, 61 per cent of adults use Facebook, according to the latest Ipsos MRBI Social Networking Quarterly survey.

Why, then, are there whispers that Facebook is in decline?  And am I the only one who’s had numerous friends leaving Facebook in recent times?

As I see it, a number of factors feed into speculation that Facebook is on the way out:

From a PR perspective, the main way to ensure your organisation’s Facebook page continues to attract followers and high levels of engagement is to produce top-quality content (or pay for one of the advertising tools!).  If your posts are interesting, informative, user-friendly and non-self-serving, they’re more likely to be liked, shared and commented on by your ‘fans’. The levels of interactions on your posts will feed into Facebook’s algorithms to determine how prominently and frequently they are displayed in users’ feeds, so it’s really important to have engaging posts!

In terms of the bigger picture, I think it will be interesting to see how Facebook reacts in the coming months to all this talk of its decline.  It hasn’t been one to rest on its laurels in the past, so it’s unlikely to just resign itself to diminishing popularity now.  That said, a year can be a long time in social media – as seen by the rapid decline of previous giants such as Bebo and MySpace. I’ll be watching with interest, in the months to come, to see just what path Facebook takes in an attempt to protect its dominant market share.

In recent years, the desire from social media users for strong visual content has been one of the most persistent trends impacting on online communications.

Platforms like Pinterest and Instagram were born in direct response to this – they are centred on allowing users to share, enhance and interact with images. Instagram is now one of the fastest-growing social networks: 50 million new users joined in the last six months alone – a quarter of its total 200 million users.

As well as static images, online videos continue to be in high demand.  Twenty-first century consumers like ‘snackable’ content – short snippets of information they can view and digest on the go.  Videos and images are perfect in this context.

Sharing images and videos can also result in higher levels of interactions with your followers. According to figures from Twitter, tweets that include a photo receive a 35 per cent bump in retweets, while tweets featuring video content get a 28 per cent bump.

The implications for your PR efforts are obvious: you need visual content that effectively communicates your work.  And, thanks to smartphones becoming all-pervasive, it’s easier than ever before to capture video and take photographs.

One of my favourite recent trends (am I allowed to say that?!) is the move towards switching off. I’ve lost count of the number of articles I’ve read about once-manic social media addicts opting for a digital detox.

I’ve never been a fan of the acronyms that have sprung up through social media but FOMO (fear of missing out) is now being replaced by JOHO (joy of hiding out) – or so I’m told!

Luminaries such as Arianna Huffington – who, ironically, made her name when she established The Huffington Post, the hugely successful online news outlet – is now repeatedly warning of the perils of being “over-connected” and suggesting we all need to unplug and move offline for a significant proportion of time each week.

Meanwhile, cafés and restaurants are springing up that deliberately block Wifi signals, encouraging customers to read a book or chat to each other, rather than sip coffees with smartphones glued to their face.

This trend is fuelled by people’s fears about online privacy, their exhaustion as a result of being ‘always on’ and, perhaps, by human nature.  We’ve spent centuries evolving as a social species, where we talk face-to-face and move about in packs.  We know it’s impolite to devote more attention to a gadget than to those sitting beside you in a meeting, at dinner or in the pub.  So this backlash against social media isn’t much of a surprise.

From a PR perspective, however, it means you may not want to focus efforts solely on engaging with people through online tools.  Traditional media outlets aren’t dead; neither are good old-fashioned phonecalls and face-to-face meetings.  As with most aspects of PR, a combination of online and offline approaches is required to ensure effective communication with all audiences.

There are lots of other trends driving the development of social media right now, and I look forward to continuing to watch them unfold.