DHR Communications recently sponsored our Account Director Martina Quinn to participate in EIL’s corporate volunteering programme.  During October 2012, she spent four weeks in Kathmandu, Nepal.  In this, the second in a series of blogs about her experiences, she recalls her first few days in Nepal and how she quickly settled in to life as a volunteer.

Four Weeks in Nepal – Part 2: Life as a Volunteer 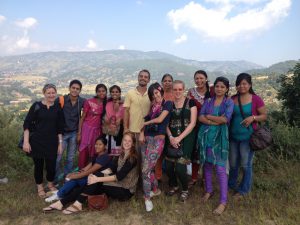 Martina with some of her fellow volunteers and staff from the volunteer house during a day-trip to see the tallest Shiva statute in the world, at Sanga in the Kathmandu Valley.

Fridays and Saturdays are the weekend in Nepal.  I arrived in Kathmandu on a Friday, so I had a couple of days to get my bearings before my volunteer placement began.

First up was an exploration of my new home.  Throughout my placement, I stayed in a volunteer house in Mahankal, a residential area in northern Kathmandu, about 30 minutes’ drive from the well-known central tourist district of Thamel.

The house can be home to as many as 30 international volunteers at any given time.  Summer is the busiest period, so when I was there (in October), it was relatively quiet.  For my first week, there were 10 volunteers in total; there were six for my second; and our number had dwindled to four by the time I left.  As well as a couple of other Irish, I was living with French, Spanish, Dutch, Brazilian and American volunteers, and the house had some Indian staff-members as well as some Nepalese, so we had a nice international mix.

The volunteer house itself was the first of many pleasant surprises I had during my time in Nepal.  It is a beautifully-kept, modern, spacious three-storey building, with balconies on every floor and a sun-terrace on the roof.  Down in the basement, there are a dining-room and the kitchen – the well-guarded preserve of Kedar, the very friendly but somewhat territorial cook!

On the ground floor, there is a large recreation room – complete with Wi-Fi – where volunteers do work planning, and watch TV and relax at night.  There is also an office with two computers for volunteers’ use, and numerous noticeboards with information about weekly schedules.

The bedrooms are on the upper floors.  Each room accommodates up to six volunteers, all sleeping in bunks and with steel shelving units for your clothes.  Because it was quiet when I was there, I shared my room with just one other girl.

There are bathrooms on every floor, complete with strong showers with an almost constant supply of hot water, thanks to solar panels on the roof.  And volunteers get three meals a day, diligently prepared by Kedar.

So, all in all, I was living in relative luxury.  Very occasionally, the hot water ran out.  There were power-cuts every day and night (this happens throughout Nepal because of electricity shortages).  And there were no laundry facilities in the house, so I had to wash my clothes by hand.  But I certainly wasn’t roughing it in the way that I had expected to be.

The neighbourhood I was living in would be considered middle-class by Nepalese standards.  It has lots of houses similar to the volunteer house, but in which large extended families or maybe a number of different families live.  There are quirky little corner-shops scattered about, selling everything from beer to beads to toiletries and toys.

The roads – as was the case in every single place I visited in Nepal – are in dire straits.  Little more than mud-tracks, they are scarred with potholes and choked with debris; covered in roughly broken stones, constantly displaced by streams of water from nearby homes.

Piles of rubbish – unfortunately, a ubiquitous sight in Kathmandu – are heaped along the roads and in the overgrown grassed areas in between housing lots.  Occasionally, these are set alight and the air is filled with acrid fumes.

Hens and dogs wander the streets.  Most Nepalese are admirably self-sufficient when it comes to producing food and the preponderance of hens is proof of this.  The majority of houses near ours kept a few, and I soon got used to the sound of roosters crowing throughout the night.

The dogs in our neighbourhood were night-time creatures too.  By day, they were a sight to behold: absolutely dead to the world asleep in any patch of shade they could find.  By night, they competed with the roosters in an inharmonious cacophony of barks and cock-a-doodle-doos.

The neighbourhood kids made a more pleasant type of noise.  Their smiles and voices and curious stares greeted me every evening when I returned home from work, and followed me every morning as I left the house – a chorus of ‘Hello’ and ‘What is your name?’ and ‘How are you?’ ringing in my ears, as I went on my way.

After a couple of days’ settling in and exploring, I visited a number of volunteer projects to see where I would be working for the next few weeks.  In consultation with local staff – and depending, to some extent, on where my help was needed most – I then chose which projects I wanted to work on, and my daily schedule ended up like this:

Ten days into my stay in Kathmandu, Dasain – the biggest annual Hindu festival in Nepal – began.  The festival lasts for 15 days and celebrates the victory of the goddess Durga over the forces of evil.  Animals are sacrificed; giant bamboo swings are erected in every village; and thousands of Nepalese leave the city to return home to rural areas to celebrate with their families.

The rituals around the festival are fascinating.  And there was a great atmosphere in Kathmandu throughout Dasain.  But it had practical implications for my volunteering work: basically, most public and educational services shut down.  So the school where I worked and the women’s English class I taught closed for a two-week holiday.  As a result, in addition to spending a few hours each day at the children’s home, I began working at the Briddhashram Social Welfare Centre, a home for destitute older people.