DHR Account Director Martina Quinn participated in EIL’s corporate volunteering programme during October 2012, spending four weeks in Nepal.  In this, the third in a series of blogs about her experiences, she describes her work teaching school-children in Kathmandu.

Shree Baal Byabashyee – the school I worked at in Nepal – is different to most Irish schools.  When you walk through the front door, you enter a large open-air courtyard.  The classrooms and corridors are located around the four sides of this yard, with stone steps leading up to the first and second floors.

Facilities are basic.  The desks are of the old-fashioned wooden kind; the walls and floors are bare cement; the children’s uniforms are tattered and torn; and there isn’t a wall-chart, a bright poster or an interactive whiteboard in sight.

The school is run by the Nepalese Government, and caters for children aged approximately five to 16.  Class sizes seem smaller than in Ireland: there were only about 12 children in the class I taught, and glimpses of other classrooms gave me the impression that this is the norm.

For my work at Shree Baal Byabashyee, I was mostly paired with another volunteer, Danielle (also from Ireland), and the two of us spent about 90 minutes each morning teaching Maths and English to a class of seven-year-olds. 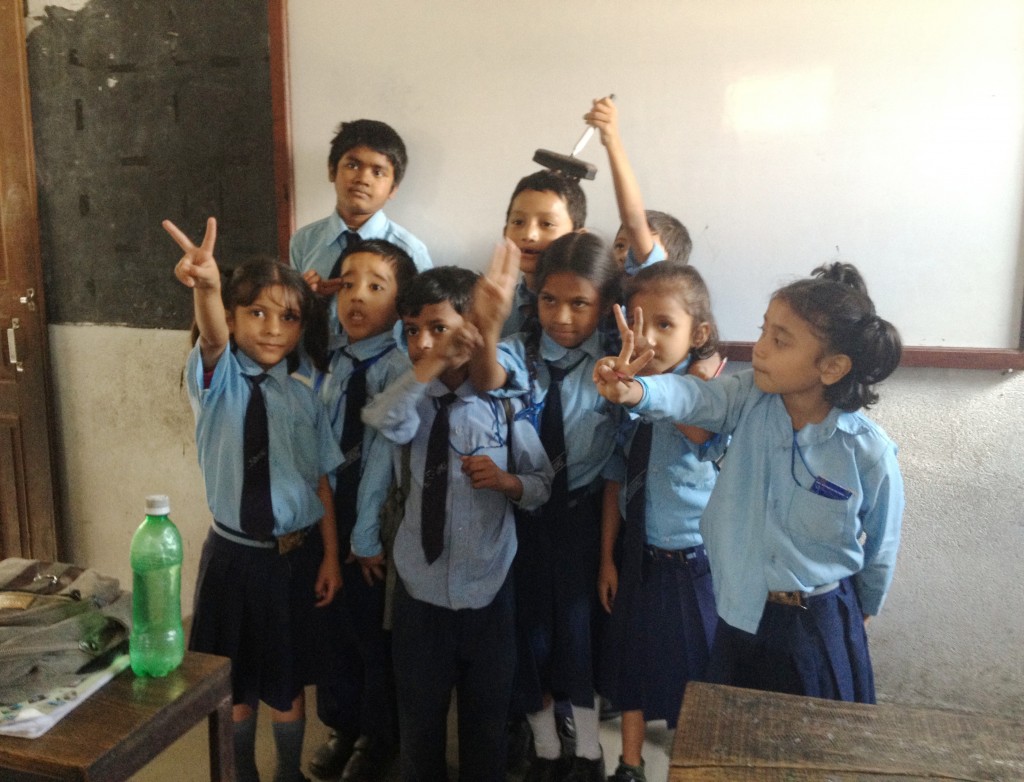 Some of the children I taught at Shree Baal Byabashyee

I found my first few classes surprisingly daunting: being the centre of attention for a dozen seven-year-olds; all eyes following me eagerly, challenging me to keep them entertained…  I soon realised the key was to come well prepared, so I focused on planning lessons in advance and making sure I had enough material at hand to keep the class interested at all times.

One of the things the kids liked most was to be called to the front of the class to write on the board (there was intense competition to be granted this honour), so I built exercises incorporating this activity into each of my lesson plans.  The children also loved receiving high fives for work they’d done, and had a particularly enthusiastic reaction to me writing in their copy-books.  If I gave one child a tick for work completed correctly, the next child would want two ticks and the next after that three.  If I wrote ‘very good’ after a student’s work on one occasion, I had to write it from then on every single time…

In Nepal, high importance is placed on learning English, and Nepalese people of all ages are eager to improve their English to enhance their job prospects.  Our class of seven-year-olds was no different: they had all been studying English for a couple of years.  They greeted us each morning with a song in English (‘Say good morning, say good morning.  How are you?’) and ended each class with a similar refrain (‘Say goodbye now, say goodbye now.  See you soon…’).  Even more impressive, they were well able to learn Maths through English – doing exercises and grasping concepts at a similar level to what seven-year-olds here would do, but all through the medium of a foreign language.

Unfortunately, my teaching stint at Shree Baal Byabashyee lasted only 10 days: after that, the school closed for holidays to mark the Dasain festival, so my volunteering schedule had to change. 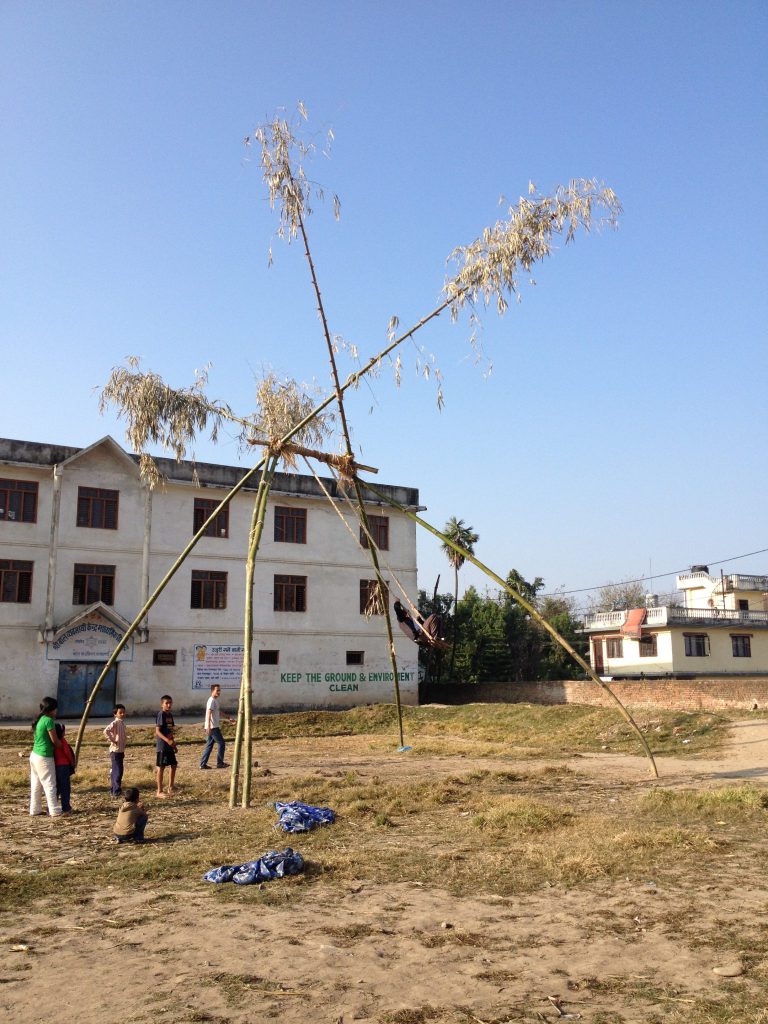 Shree Baal Byabashyee school building.  The giant bamboo swing in the foreground was erected as part of the celebrations to mark the Dasain festival.  For the festival, huge swings like this are erected temporarily in villages and cities all over Nepal.

One of the highlights of my time at the school was the concert held on the final day before the holidays: it began at 7am and lasted until lunchtime, and was like nothing I had ever experienced before.

For the event, three or four classrooms were joined together to make one very long, very narrow room, into which every single student was packed, along with teachers and special guests.  All of the volunteers who taught at the school were invited along, and were seated in prominent positions in the front rows with other guests.  While we remained steadfastly attentive (if somewhat bemused) throughout the event, some of the others in our midst chattered loudly, snoozed, took phonecalls, or read the newspaper, rustling the pages noisily and jostling people with their elbows left and right.

There were rows of seats at the front of the room but, the further back you went, the more chaotic it became.  About halfway back, the seating stopped and the children stood jampacked, crowded together in a frenzy of excitement, behaving as though they were at a sell-out show by an international pop-star, rather than a school concert with performances by their peers.  At the very back, some of the older kids stood on desks and clambered to get high up on the window-sills and walls, whistling and screaming at the performers and noisily singing along.

Some of the enthusiastic audience at the school concert

A raised stone platform at the top of the room – the spot from which the teacher usually led his or her class – served as the stage.  Various performers trooped on and off over the course of the morning, ranging from complex traditional dance acts – complete with beautiful ethnic costumes – to more contemporary hip-hop.  The performers who sang well-known Bollywood songs were a particular hit: the watching students went wild, swooning and singing back at them, and greeting them with rapturous applause.  One particularly memorable performance was delivered by a teenage breakdancer, obviously one of the more popular boys in the school!

Every so often, the performances were interrupted for speeches by some of the special guests.  To my horror, I was called upon to speak on behalf of the volunteers.  Having approximately four words of Nepali and speaking to a noisy, distracted audience far more interested in where the next Bollywood song was coming from than in what I had to say meant I was one of the less popular acts of the day!

The concert finished with a raucous ensemble performance, led by the two teenage MCs, one of whom accompanied the singing on a traditional Nepalese drum.  The finale lasted at least 30 minutes, with the performers embarking on a procession around the room and back up to the stage, and various students joining in in an impromptu way.

As well as inviting us to this unforgettable event, Shree Baal Byabashyee honoured our contribution as volunteers by performing a tika ritual for us on our last day.  Tikas – red dots in the centre of the forehead – are commonly worn by people in Nepal.  They are a symbol of blessing from the gods, and can range from discreet circular bindis to large smears of a mixture made from rice and red paste across a person’s forehead.  Being marked with tika by a Nepalese person can denote their hospitality, gratitude or blessing.  Tikas can also signify the marital status of the wearer, and are applied in complex patterns for different religious ceremonies.

I was given tika on a dozen occasions during my time in Nepal, usually accompanied by the placing of a cream-coloured scarf around my neck.  When a number of people are present for the giving of tika, each person must take a turn, so the recipient can end up with a lot of red paste daubed across their forehead and multiple scarves around their neck, something that happened to me a number of times. 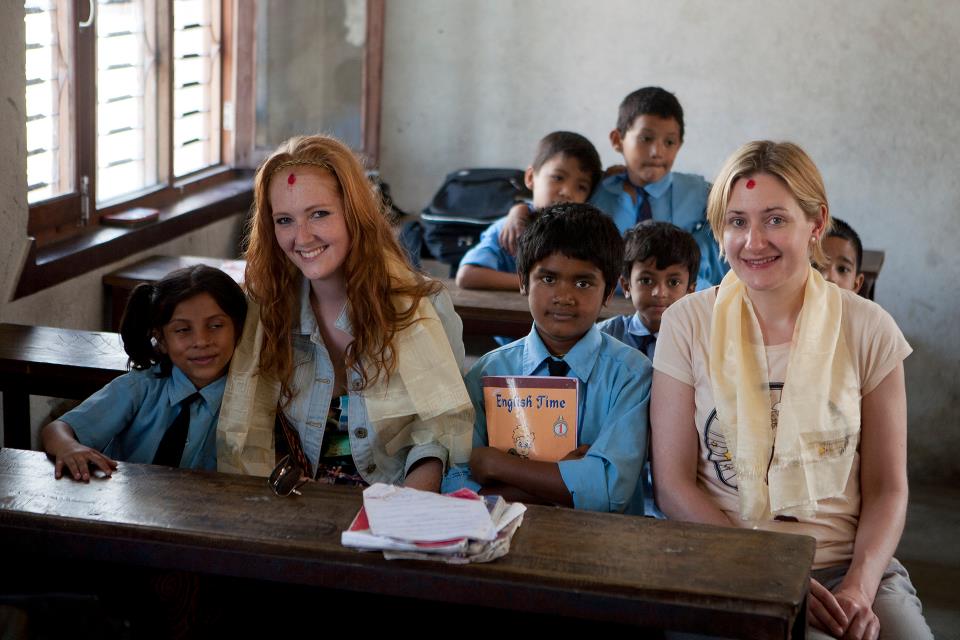 My fellow volunteer Danielle (on the left) and I, pictured with some of our students after our tika ritual with the staff of the school.

The concert and tika ritual marked the end of my work at Shree Baal Byabashyee, but my 10 days there gave me a brief insight into the education system in Nepal and brought home to me how privileged we are in Ireland to have good public schools.

Here, we take it for granted that every child can receive a free State education, and our enrolment levels for primary school are at 100 per cent.  In Nepal, a system of public education exists – and many initiatives have been introduced to improve educational attainment levels – but relatively high proportions of children still never attend school.  According to a 2012 report, only 78 per cent of school-age boys, and an even lower 64 per cent of school-age girls, were enrolled in Nepalese primary schools over the past 10 years.

The number of schools in Nepal has increased exponentially in recent decades, often with international development assistance.  But a lot of this progress has been neutralised by rising population levels and political instability.  The burgeoning population means there continues to be a shortage of facilities, and the 10-year civil war – which lasted from 1996 to 2006 – severely disrupted schooling for an entire generation of rural children.

Huge challenges still exist in ensuring all Nepalese children receive an adequate education.  Ongoing political instability does not help the situation.  The enthusiasm of the children I met at Shree Baal Byabashyee, however, and the obvious dedication of the teachers, does inspire hope.

2 thoughts on “Four Weeks in Nepal – Part 3: Teaching in a Nepalese School”