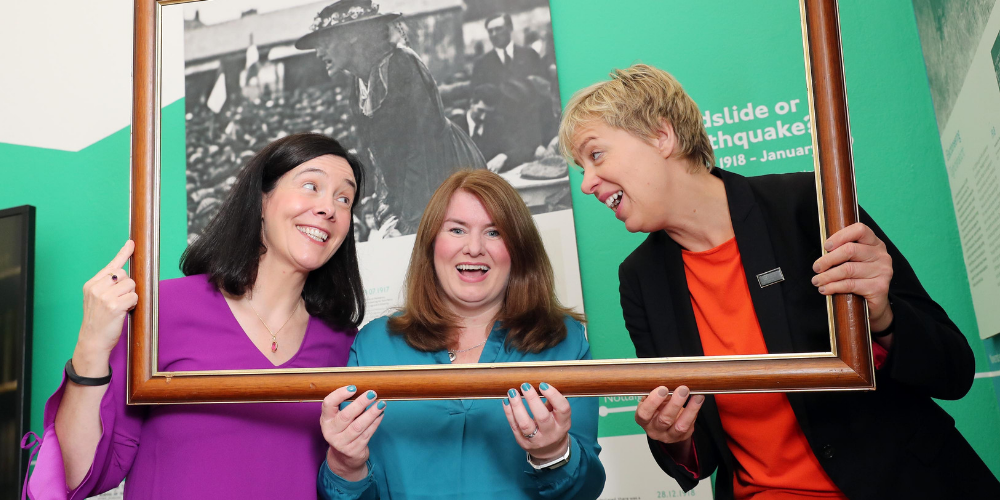 From Ballots to Bullets: Ireland 1918-1919 at the National Photographic Archive

The end of World War I, the suffragette movement, the global flu pandemic and the first meeting of Dáil Eireann are among the pivotal moments in Irish history recounted in the National Library of Ireland (NLI)’s new exhibition, From Ballots to Bullets: Ireland 1918-1919 at the National Photographic Archive. The exhibition was launched by Senator Ivana Bacik, Chair of the Oireachtas Vótáil100 committee.

‘From Ballots to Bullets’ documents the two tumultuous years leading to the birth of the Irish Republic through the NLI’s rich holding of photographs, newspapers, posters, postcards and advertisements. Items on display include: anti-conscription articles, general election posters specifically appealing to women voters; and evocative photography taken during key moments, such as the release of Constance Markievicz from prison, and during the first sitting of Dáil Eireann in 1919.

A bold, graphic timeline leads visitors to the exhibition through the dramatic events of this era and serves as the backdrop for much of the material on display. Multimedia elements such as video showing archival footage and contemporary analysis, and a touchscreen display, add a sensory, tactile dimension to the exhibition, allowing visitors to get ‘hands-on’ with history.

Speaking at the launch, Director of the NLI, Dr Sandra Collins, said: “Ireland’s revolutionary past is complex and it’s important that we approach this period with sensitivity and inclusiveness. The National Library’s rich and varied collections offer unique archival insights. We hope the wide range of material on display in ‘From Ballots to Bullets’ will offer visitors a new opportunity to engage with our history, both the big events but also the individuals and their hopes and dreams.”

Upstairs in the gallery space, the exhibition focuses on six revolutionary lives, individuals whose stories illuminate different aspects of the 1918-1919 period. These include:

Launching ‘From Ballots to Bullets’, Senator Bacik said: “I am honoured to open such a striking and thought-provoking exhibition by the National Library of Ireland. Through its diverse collection of objects and artefacts, the NLI offers nuanced and sensitive insight into an intense moment of struggle in Irish history. As Chair of the Oireachtas Vótáil100 Committee, I am particularly taken by the centring of women’s experience in the exhibition and its focus on the fight for women’s right to vote and participate in all aspects of life, as told through compelling images and profiles of often overlooked female figures.”

Exhibition curator, Nikki Ralston added: “Although the period explored by ’From Ballots to Bullets’ may often be remembered for its political upheaval, everyday life went on alongside the dramatic events of those years. We have incorporated many aspects of Irish life during that time, from Lá na mBan to the soaring demand for Bovril as people tried to protect themselves from the flu pandemic, so everyone can imagine how their lives might have been 100 years ago.  In particular, I would encourage schools, younger people and students to visit and understand how our past can offer lessons for the present and future.”

‘From Ballots to Bullets: Ireland 1918-1919’ is free to visit, and is open seven days weekly: Monday to Saturday 10am to 5pm and 12noon to 5pm on Sundays. The exhibition runs in the NLI’s National Photographic Archive, Meeting House Square, Temple Bar until May 2019.