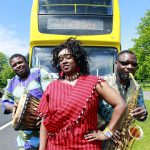 It has been a busy few weeks for the team at DHR as we prepare for Irish Aid‘s Africa Day Dublin celebrations which takes place  in the grounds of Farmleigh in Dublin’s Phoenix Park this coming Sunday, 26th May. Yesterday, the full line-up for Africa Day Dublin was announced including an array of well-known personalities from the worlds of music, media, politics and sports.

The free event will run from 11am to 5pm, featuring a jam-packed schedule of music performances, children’s entertainment, food, dance, drumming and sports.  All are welcome to attend.

Dublin Bus will provide a free shuttle-bus service from the Heuston Bridge / Parkgate Street bus stop into the Phoenix Park. Families travelling by Luas, meanwhile, will be able to avail of the continued ‘kids go free’ offer, and there is also free car-parking available at Farmleigh.  Members of the public travelling by car are advised to note that parts of Chesterfield Ave will be closed to traffic, so alternatives routes should be used to access Farmleigh.

Ireland’s foremost Afrobeat group Colours Afrobeat Foundation and rising gospel stars No Limits are the newest additions to the Main Stage at the event, which is sponsored by Lycamobile.  They join Stone&Jezreel, Gypsy Rebel Rabble, The Amazing Few and Madu for a day-long programme of soul, pop-punk, bluegrass, reggae and rap.

The second stage at Africa Day Dublin – sponsored by Moneygram – will have a strong focus on urban music, featuring a host of rappers, DJs and hip-hop artists of African / Irish origin.  Those performing will include: DJ Wax, ShoBiz, Graciano Major, Funzo and DJ Me.

One of the focal points of the Africa Day Dublin event will be the outdoor African Bazaar.  This will house 40 different groups, showcasing the culture and traditions of numerous African states, ranging from Ethiopia, Kenya and Uganda in East Africa to the Western states of Nigeria, Guinea and Ghana, and Tanzania, Malawi and Botswana in the south.

Activities on offer will include free face-painting and henna hand-painting; traditional coffee-making ceremonies; displays of arts and crafts; and children’s treasure hunts, quizzes and games.

Some of Ireland’s leading development NGOs will be present, offering fun, interactive activities.  Visitors will have the chance to contribute a message, story or photo to an Africa Day 50th Birthday card; measure their ‘virtual water’ footprint and find out how they can be more eco-friendly with their water use; have their family photographed as part of an international photography project; or sit in a typical African fishing boat to play a simple ‘fishing’ game.

The Sports and Play Zone adjacent to the African Bazaar will be officially opened at 11.30am by the world-renowned Kenyan athlete Wilfred Bungei, who won the 800-metre gold medal at the 2008 Olympics in Beijing.

The Football Association of Ireland will then run a fun skills zone until 2pm, where sports enthusiasts of all ages and abilities can test their dribbling, running, passing and shooting skills.

From 2pm to 5pm, traditional African games will be on offer, as well as a giant ‘snakes and ladders’ game and amusement rides for children.

The Speakers’ Corner will host interactive workshops over the course of the day.  The first – kicking off at 12pm – will see radio presenter, actor and stand-up comedian Dil Wickremasinghe host a discussion on ‘the changing relationship between Africa and Ireland’.

The Minister for Trade and Development, Joe Costello TD, will be one of the panellists for a discussion on ‘Celebrating 50 Years of African Unity: Achievements of the African Union’ at 2.45pm.  Chaired by Irish Times Foreign Policy Editor Paddy Smyth, this workshop will also feature contributions from H.E. Catherine M. Mwangi, Kenyan Ambassador to Ireland and Dean of the African diplomatic corps; Salome Mbugua, Director of AkiDwA, the migrant women’s organisation; Síle Maguire, former Irish Ambassador to the African Union; and Dr. Carol Newman, Assistant Professor in Economics and a Fellow at Trinity College Dublin.

The final workshop at Africa Day will focus on active citizenship and the inclusion of members of Ireland’s African diaspora communities in politics and civic society.

One of the highlights of Africa Day Dublin promises to be the ‘best dressed’ competition: visitors are being encouraged to deck themselves out in their most colourful African finery before coming to the event.  Those who consider themselves in the running for a prize can enter at the ‘Best Dressed’ stall in the African Bazaar, and a parade of finalists will take place through the grounds of Farmleigh before the winners are announced at 4.15pm.

Other elements of Africa Day Dublin will include:

Africa Day events in Ireland are supported by Irish Aid at the Department of Foreign Affairs and Trade.  Further information is available at www.africaday.ie. The full schedule is available below