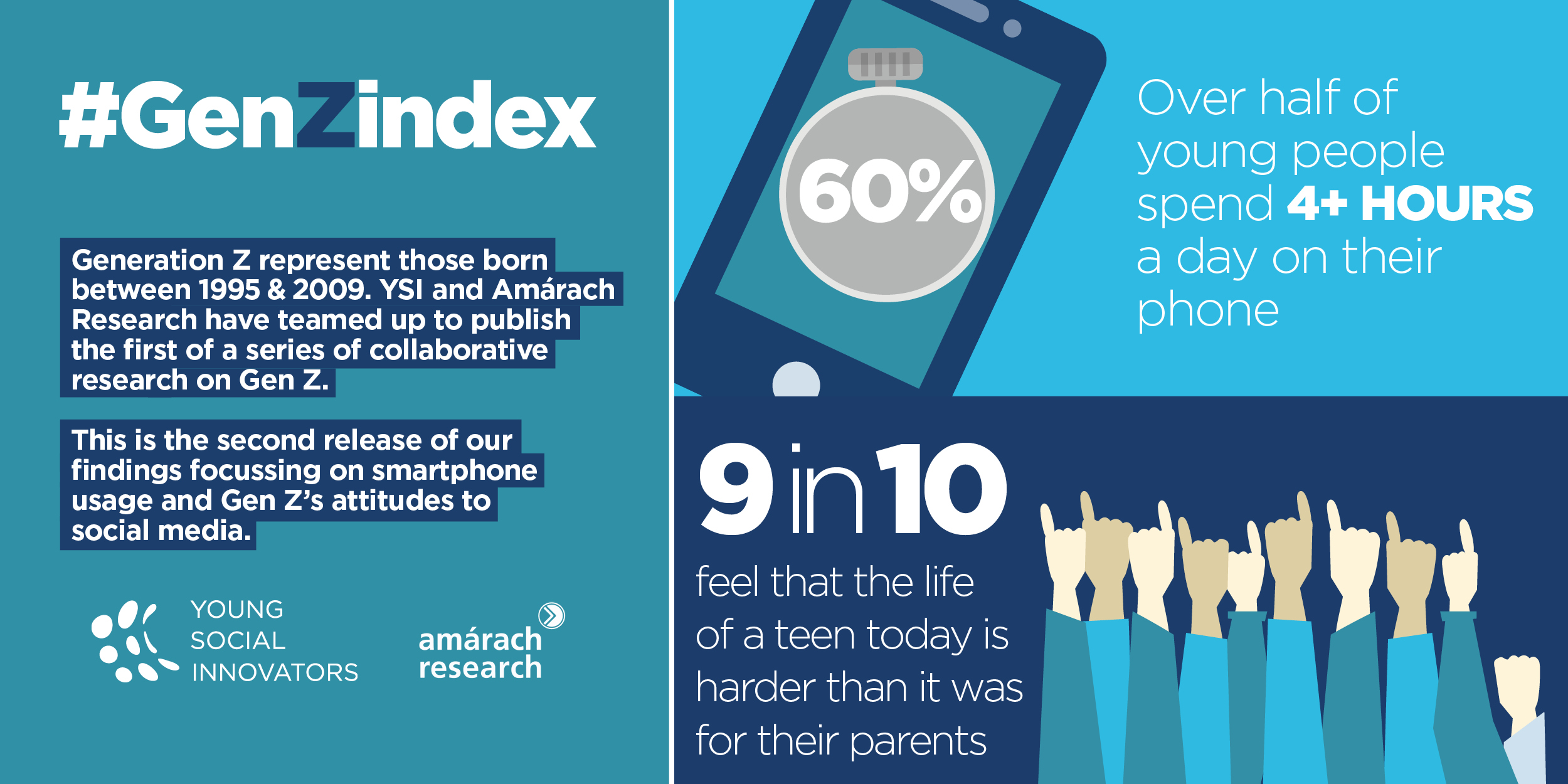 Young people in Ireland spend an average of four hours per day on their smartphone, with a high proportion spending six or more hours on their phone. That’s according to new research undertaken as part of the Young Social Innovators (“YSI”) / Amárach Generation Z Index.

This year, Young Social Innovators, Ireland’s largest social awareness and active citizenship and education programme, and Amárach Research, market research and data specialists, entered into a partnership to research and measure annually the sentiment of Generation Z young people aged 16 to 21 years.  The primary research in the YSI / Amárach ‘Gen Z Index’ was launched in May. Supplementary research, published today, looks specifically at smartphone usage and attitudes towards social media among the Gen Z cohort.

According to the YSI / Amárach ‘Gen Z Index,’ 25% of young people indicated they spend four hours a day on their phone, while 21% said they spend six hours or more on their phone per day.  Only 3% spend one hour or less on their smartphone.

According to CEO of Young Social Innovators, Rachel Collier: “There has been a lot of discussion in the media in recent weeks about keeping young people occupied during the summer months and, in particular, how to get them away from screens. From this research, we can see how strongly embedded smartphones are in the day-to-day lives of Generation Z. For all of us involved in guiding young people from teens to adulthood, the issue of smartphone usage is something that we need to be aware of.  These devices are part of the life and culture of Generation Z: they are not going away.

“Smartphone usage can involve a range of activities for young people: for some, staying networked and connected is very important; others may engage in video or gaming; while for some, it’s the source of news and information that might stimulate a school project or further learning.  These activities are not inherently bad or damaging, but we are aware that prolonged use likely takes time and energy away from important social interactions and real-life relationships, as well as off-line learning and general wellbeing.

“We need to focus on getting the balance right between smartphone usage and real-life experiences, without trying to roll-back on something that is firmly part of contemporary youth culture.”

The majority of young people (93%) feel that the life of a teenager is more difficult than it was for their parents.  While pressure to achieve good exam grades, go to college and get a good job were cited as the areas where life has become most difficult (36%), a large proportion of young people indicated that ‘unrealistic beauty and life satisfaction’ perpetuated by social media made life more difficult for today’s teenagers (31%). A large proportion of those surveyed (28%) felt that the constant peer pressure and scrutiny from social media also contributed to making life more difficult.

Despite feeling pressurised by the ‘always on culture’, young people feel that social media plays a positive role in their lives.  Some 60% of respondents said that social media has positively impacted their lives, with 67% of males agreeing to this statement and 58% of females.

Associate Director with Amárach Research, Sarah Rooney said: “The scrutiny and unrealistic expectations of beauty and life perfection – arising from social media interaction – come across as areas of concern for young people.  Overall, as we saw from our primary research – issued in May – young people feel stressed and anxious, and their relationship with social media clearly contributes to this.

“Interestingly, while young people feel social media has made their lives more difficult by creating this culture of scrutiny, the majority of them also see it as a force for good. This research clearly highlights the conflicting relationship that young people have with social media. As the first generation born into social media, they view it as contributing positively to their lives, however they also appear to be struggling with the pressures stemming from it.

“The smartphone has become an extension of this generation, as shown by the vast amount of time they report spending on it. As adults and as a society, we need to be mindful of the uniquely intrusive and ‘always on’ nature of smartphones and the effects this can have on anxiety and wellbeing amongst young people.”

The research for the YSI / Amárach ‘Gen Z Index’ was conducted in March and April 2019 during a number of Young Social Innovators ‘Speak Out’ events.  Young people were also invited to engage with the research online. Further supplementary research – dealing with education and jobs preferences among young people – will be published later this year as the final instalment in the 2019 YSI / Amárach Gen Z Index.  The research sample size comprised 458 young people.