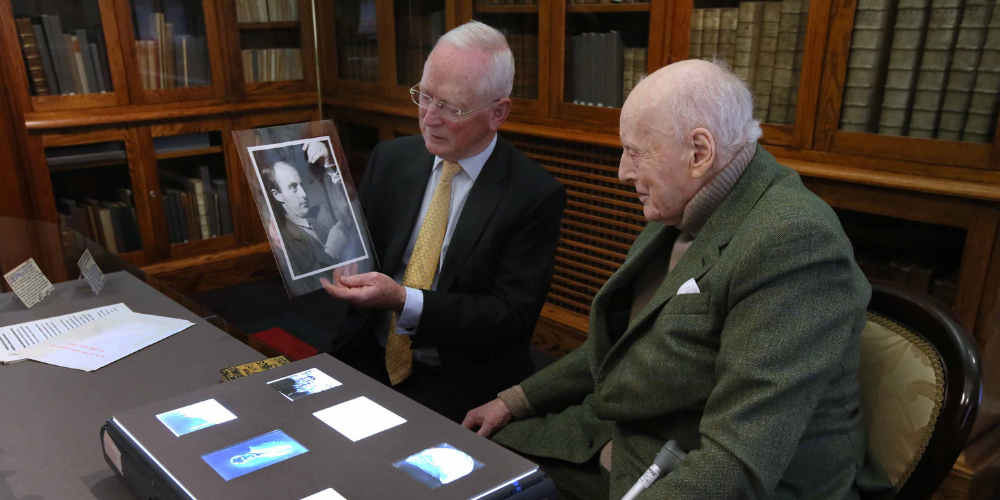 The National Library of Ireland (NLI) has announced receipt of the archive of acclaimed Irish documentary filmmaker George Morrison. The archive reflects a career spanning more than sixty years and shows a remarkable commitment to Irish film. The donation comprises photographs, ranging from lantern slides to photo albums, as well as production notes, scripts and correspondence relating to Mr Morrison’s work in film; all of which paint a comprehensive picture of his creative practice.

Born in Tramore, Co Waterford, in 1922, Mr Morrison is widely recognised for his filmmaking during the 1950s and 1960s, a period in which he made Mise Éire (1959) – the first feature-length Irish language film – and Saoirse? (1961), which together tell the story of Ireland’s revolutionary period from the late 19th century through to the Civil War. His contribution to Irish film was honoured with membership of Aosdána and the receipt in 2009 of the Industry Lifetime Contribution Award from the Irish Film and Television Academy. He has also published several books based on his photographic archive.

Highlights from Mr Morrison’s archive include:

Speaking at the donation, Mr Morrison said: “Having undertaken extensive research throughout my own career, consulting archival material in order to inform my work, I recognise the important role institutions like the National Library of Ireland play in this regard. I am pleased to entrust my archive to an institution that will ensure its preservation for the coming generations of filmmakers and researchers, and hope it will offer an insight into my own practice and inspiration for the practice of others.”

Chairman of the NLI, Paul Shovlin commented: “A pioneer in his field, George Morrison has made an indelible contribution to Irish film; not only its creation but its safeguarding also – something the National Library of Ireland itself is deeply committed to. We are delighted that “Mr Morrison has chosen to donate his archive to the National Library, where the stories he has told through his work will continue to reach new audiences and generations. Complementing the NLI’s Liam O’Leary archive and the recently acquired Neil Jordan archive, today’s donation is a fantastic addition to the Library’s rich collections and will help develop a more complete picture of the history of filmmaking in Ireland.

“The NLI is particularly pleased to acknowledge that this collection is dedicated to the memory of George Morrison’s dear friend Dr Richard J. Hayes, who was Director of the National Library of Ireland from 1940 to 1967.”