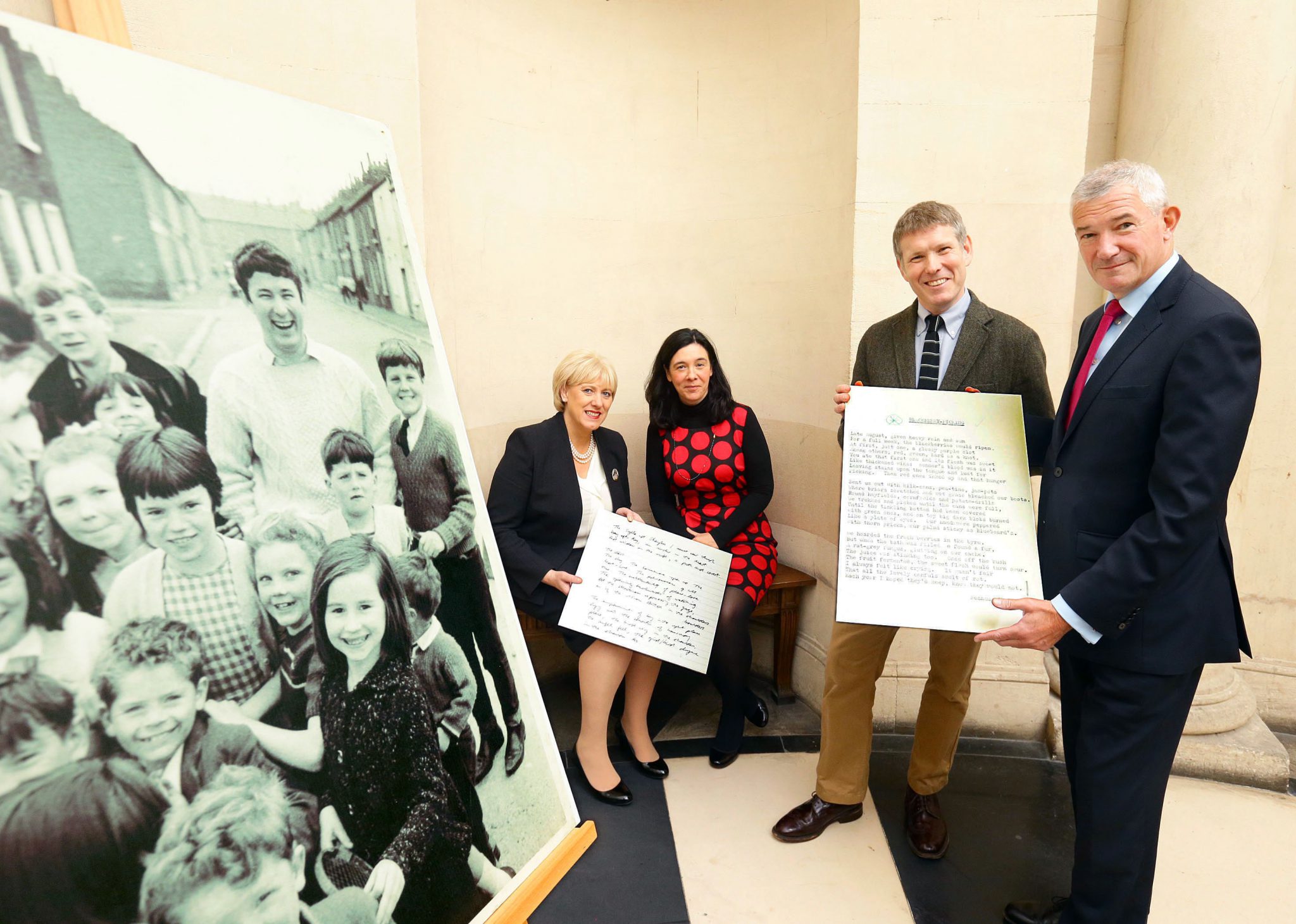 A major international exhibition celebrating the life and work of Nobel Laureate Seamus Heaney is planned for display at the new Cultural and Heritage Centre within Bank of Ireland’s College Green complex, it was announced today (07.10.15).

The inaugural exhibition in the new space, announced by the Minister for Arts, Heritage and the Gaeltacht, Heather Humphreys TD and Chief Executive of Bank of Ireland, Richie Boucher, is planned for 2017. Curated by the National Library of Ireland (NLI), it will celebrate the life and work of Nobel Prize-winning poet Seamus Heaney (1939-2013), who was also a distinguished essayist, playwright, translator, professor, and literary critic. The exhibition will draw on the writer’s extensive literary archive, which was donated to the NLI in 2011, and on archives held by Emory University. It will feature Heaney’s original manuscripts as well as letters, unpublished works, diary entries, photographs, broadsides and multi-media recordings.

The Heaney exhibition will be the first exhibition to be housed in the new Cultural Centre, and is expected to run for several years. The free, public exhibition will be curated for the NLI by Professor Geraldine Higgins, director of Irish Studies at Emory University, who also curated Emory’s highly praised exhibition, ‘Seamus Heaney: The Music of What Happens’ in 2014.

Bank of Ireland announced in February 2014 that it would make public exhibition space available to the State for a period of ten years. Recognised as important heritage buildings which have played a significant role in the history of Ireland, the new Cultural and Heritage Centre based in the College Green buildings will be utilised for the staging of exhibitions and other cultural events that will be open to the public.

Welcoming the announcement of the Heaney exhibition at Bank of Ireland’s new Cultural and Heritage centre, Minister for Arts, Heritage and the Gaeltacht, Heather Humphreys TD, commented: “The development of this new Cultural and Heritage Centre by Bank of Ireland for use by my Department will deliver an exciting new visitor experience in the historic and cultural heart of Dublin. A section of the iconic building at College Green will be transformed and opened to the public, and will be a fantastic addition to the city’s cultural infrastructure.

“I am delighted that the first exhibition to be housed in the new centre will focus on the life and work of Seamus Heaney, who was arguably the greatest poet of his generation. It will offer an unparalleled opportunity to remember and honour the Nobel Prize winning poet. The Exhibition will showcase the best of the Seamus Heaney donation to the National Library, together with materials held by Emory University in Atlanta.  I would also like to pay tribute to my colleague Jimmy Deenihan for his vision in instigating this project.”

Speaking at the announcement today, Dr Sandra Collins, Director of the NLI, said: “We are delighted to have the opportunity to work with the Seamus Heaney archive, donated to the Library by the writer and his family, to create a landmark international exhibition. We are also thrilled to have the chance to house the exhibition in the iconic heritage buildings of College Green, which have played a significant role in Irish history. This new exhibition represents the realisation of a major aspiration for the Library, and is a fitting tribute to the significance and generosity of Seamus Heaney.”

“The NLI has a distinguished record in producing exhibitions built on literary collections, and we are excited to welcome Professor Geraldine Higgins to continue this tradition. The exhibition will show that from his first publication, Death of a Naturalist in 1966, to his last volume, Human Chain in 2010, Heaney’s words speak directly to us, revealing a world that is familiar yet strange, rooted yet transcendent. Visitors will have the chance to experience the writer at work behind the scenes, transforming the everyday into the marvellous.”

Richie Boucher, Chief Executive, Bank of Ireland said: “I am delighted that this project can now move forward, and that the inaugural exhibition in the College Green Cultural and Heritage Centre will be one of such significance. Bank of Ireland has been part of the fabric of Irish life since 1783, has been operating from College Green for more than 200 years, and today is the largest lender to the Irish economy. Our College Green buildings form a very important part of Ireland’s history and heritage, and it is fitting that they will host an inaugural exhibition of such national and international significance.”

Speaking on behalf of the family, Seamus Heaney’s son Mick said: “I’m delighted at the news that the National Library is organising an exhibition on my father’s work and life and that it will be the inaugural show at this new cultural space in one of Dublin’s most famous buildings. He was extremely happy that his papers found a home at the National Library and our family is honoured at the prospect of this exhibition and the opportunity for a wider audience to enjoy and engage with his archive.”

Department of Arts, Heritage and the Gaeltacht

DHR Communications (on behalf of the NLI)