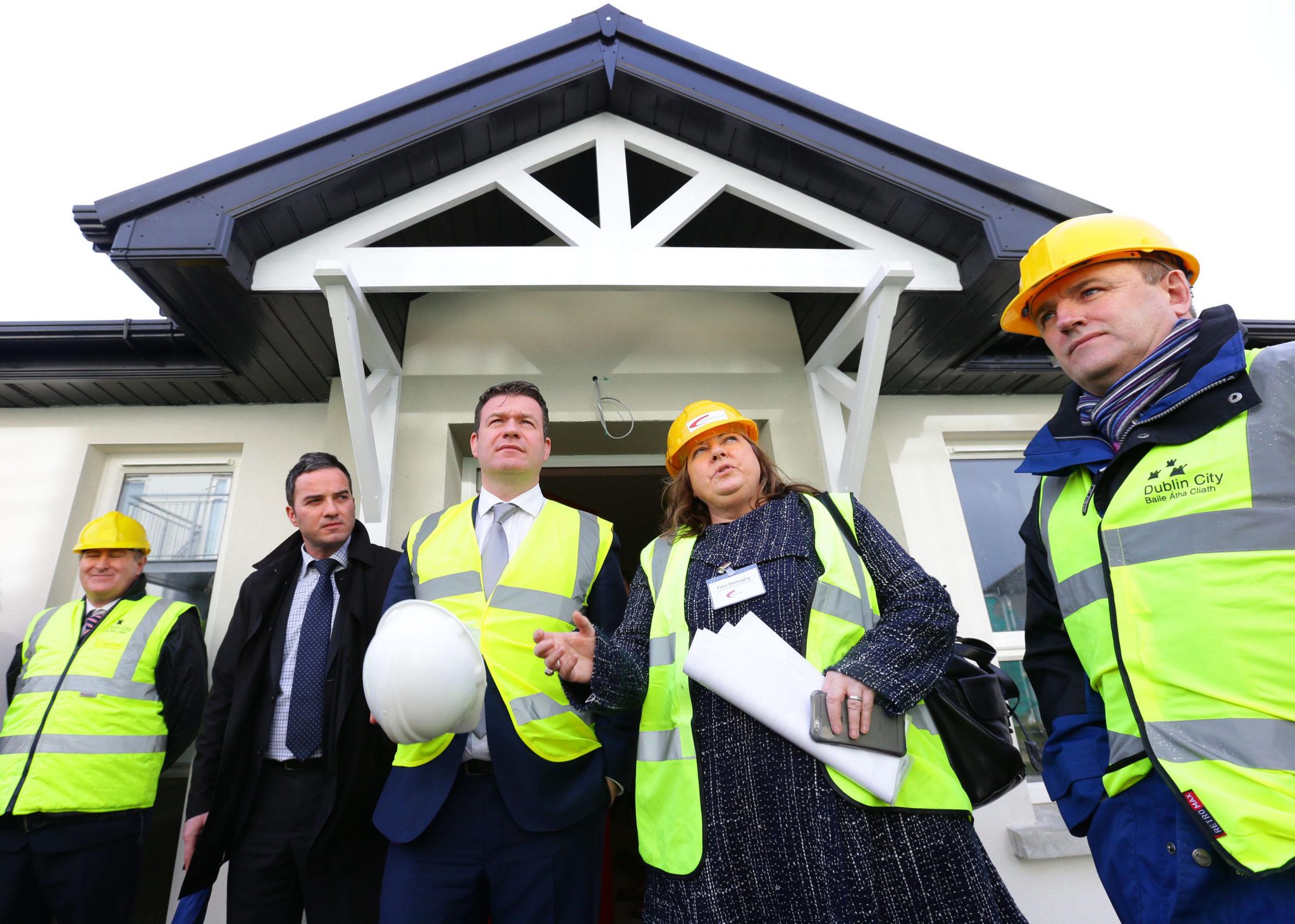 The housing association Fold Ireland’s innovative social housing project to provide homes for older people in north Dublin, which is due to be completed next month, was visited today (26.01.16) by Minister for the Environment, Community and Local Government, Alan Kelly, TD.

The Minister visited the site to view progress to date at the social housing project for older people in Glasnevin. The 50-unit development is expected to be complete by mid-February 2016 and will comprise 47 apartments and three bungalows. It was financed through a combination of private funding and local authority support.

Speaking today (26.01.16), Tina Donaghy, Head of Housing & Development with Fold Ireland, said: “We are delighted with the progress we have made with the regeneration of housing at Ballygall Road East. The economic downturn made it extremely difficult for local authorities to meet the demand that exists for social housing.

“Because of this, housing associations like Fold Ireland needed to work on developing innovative solutions with local councils and the Department of the Environment to meet social housing needs. The innovative approach we have taken, whereby local authorities transfer ownership of housing projects to associations, which leverage the projects’ value to access private funds, has proved very successful regarding the regeneration of the housing project here in Glasnevin.

“The progress we have made with our project, in partnership with Dublin County Council, proves that our solution, of combining private finance and local authority support, has been extremely successful. We feel that this approach could be replicated with other housing authorities throughout the country and we look forward to the project’s completion in mid-February 2016, when we will welcome a further 14 residents into their new homes.”

Launched in 2014, the housing regeneration at Ballygall Road East represents a new approach to providing social housing for older people – combining private finance and local authority support. The previous housing project had been built by Dublin City Council in 1969, and managed by the Council until 2014.

Fold Ireland originally received planning permission in 2008 to build 83 new units on two-thirds of the site. The accommodation was to provide a high dependency living unit with associated communal living, training and staff facilities. However, the economic downturn resulted in the original plan not going ahead due to lack of funding.

Fold Ireland revisited the proposal and considered alternatives to regenerate the site. In partnership with Dublin City Council (DCC), the regeneration project was funded with private finance from Bank of Ireland as well as CALF (Capital Advance Leasing Facility) funding from the Department of the Environment.

Dublin City Council transferred ownership of the Glasnevin housing project to Fold and it was at this stage that Fold was able to access private finance from Bank of Ireland and begin undertaking a complete regeneration of the project.

The project consisted of reinstating 39 state-of-the-art housing units for elderly couples and individuals on the foundations of the old development. The one-bed and two-bed modern and fully accessible apartments have access to an adjoining community center and there are currently 43 residents living in the accommodation.

When the regeneration project was nearing completion, based on the success of the funding model to date and further to discussions with Dublin City Council, Fold Ireland proposed creating additional units. Following on from this, a further planning and funding application was submitted and the construction of a further 11 new homes commenced.

Gerard Edward (56) is one of a number residents who moved into the new accommodation in March 2015. Prior to living here, Gerard spent two and a half years in Teach Mhuire in Gardiner Street, a rehabilitation centre, and has never had his own home. According to Gerard, living in his new one-bed apartment is “like winning the lottery”. Gerard said: “While I was never out on the streets, I didn’t have my own home and living here has given me a whole new lease of life. I get on really well with my neighbours and I want for nothing.”

Hilda Hickey Wrenn (67) has also been living in the accommodation since March 2015, in a one-bed apartment. Hilda had lived in Cappagh Green in Finglas for 30 years, where she reared her two children. “I love living in Ballygall Road – it has every shop I could possibly need in the vicinity, great neighbours and there’s a real sense of community here. I know most of my neighbours to see and would stop a have a chat every now and then,” she said.

Fold Ireland has provided apartments and houses for older people and families in the greater Dublin area since 2001. In addition, the organisation provides supported housing with 24 hour care for frail and older people. Fold was originally synonymous with housing and support for older people with dementia.