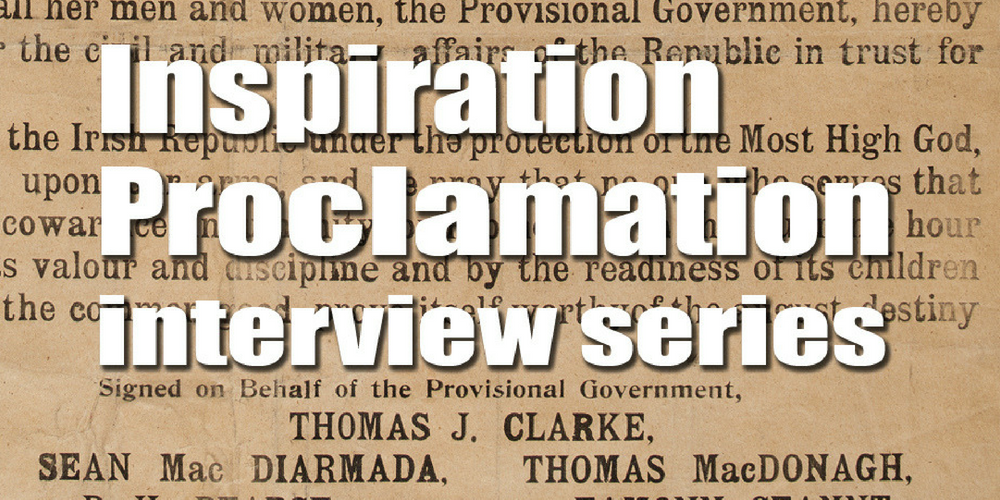 The National Library of Ireland (NLI) has announced a series of public interviews ‘Inspiration Proclamation’ with historian and broadcaster Dr John Bowman. The series will consider the relevance of the 1916 Proclamation and five prominent figures from Irish life will share their unique insights and thoughts during their own hour-long public interview.

Speaking today, Dr Sandra Collins, Director of the NLI said: “As 2016 draws to a close, it is time to reflect on the 1916 Proclamation – is it seen now as an inspirational text or as a historical document? This series of public interviews in the National Library of Ireland, with a diverse and distinguished list of speakers in discussion with Dr John Bowman, will be an important part of that reflection. The series aims to engage, inspire and provoke discussion. The events are free and open to the public but we expect great interest and booking is essential. The National Library’s year-long programme of events and exhibitions to commemorate 1916 has attracted strong public interest with more than 100,000 visitors to date.”

Dr John Bowman, historian and broadcaster added: “In 1916, the National Library was an intellectual and social hub at the heart of Ireland and the Inspiration Proclamation series of public interviews is one example of how the Library continues to honour this tradition. I look forward to discussing with our five guests the principles of the Proclamation, how it has influenced the thinking of later generations, and its relevance in contemporary Ireland.”

The first of the series will take place on Wednesday, 21st September at 7pm in the National Library of Ireland on Kildare Street, when Archbishop Diarmuid Martin will be interviewed.

One of the most widely respected church leaders in Ireland, Archbishop Diarmuid Martin was appointed Under-Secretary of the Pontifical Council for Justice and Peace in 1986, and in 1994 Secretary of the same Pontifical Council. In 1998, he was appointed Titular Bishop of Glendalough and received the Episcopal ordination at the hands of Pope John Paul II in St Peter’s Basilica the following year. He was appointed Coadjutor Archbishop of Dublin in 2003 and the next year, succeeded Cardinal Desmond Connell as Archbishop of Dublin.

John Bowman is a broadcaster and historian. His latest book ‘Ireland: the Autobiography’ has just been published by Penguin.

The public interviews are free to attend, but booking is essential, with a maximum of two tickets per order.

Booking for the public interviews is available online: https://www.eventbrite.com/e/inspiration-proclamation-archbishop-diarmuid-martin-in-conversation-tickets-26782623548.