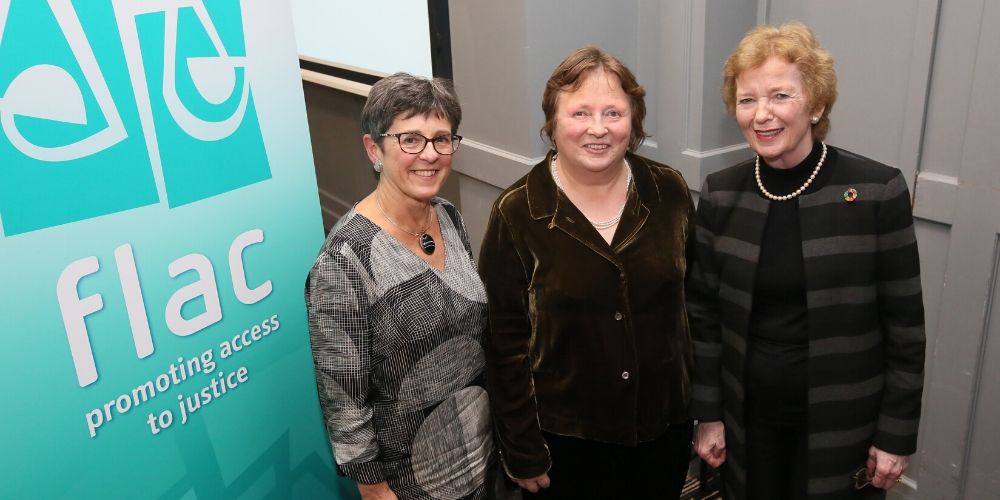 The legacy created by Josie Airey – who paved the way for civil legal aid in Ireland – deserves to be marked by significant reform of the legal aid system.  That’s according to chief executive of FLAC, Eilis Barry, who was speaking ahead of the organisation’s 50th Anniversary Celebration, incorporating the Annual Dave Ellis Memorial. It is 40 years since Josie Airey challenged the State in the European Court of Human Rights, and was successful in securing legal aid to enable her to get a judicial separation from her estranged husband. Mrs Airey was represented by solicitor Brendan Walsh and then barrister, Mary Robinson.

This year’s memorial event will see Mary Robinson, Former UN High Commissioner for Human Rights and former President of Ireland, in conversation with former broadcaster and journalist Doireann Ni Bhriain. She will discuss her history with FLAC and her career dedicated to human rights. This will be preceded by a panel discussion on FLAC through the decades. Tonight’s celebration marks the culmination of events by FLAC to mark its 50th anniversary.

Commenting, FLAC chief executive, Eilis Barry said: “Access to legal aid in Ireland has allowed people who are economically disadvantaged to secure legal representation and have access to justice.  Such access is fundamental to any modern justice system. However, this right to access justice – so courageously established by Josie Airey – is a limited and compromised right.  It is beyond timely for the Government to reform our system of civil legal aid so it becomes accessible to those who need it.”

“Since its establishment, the Legal Aid Board has undertaken vitally important work, however, there are significant gaps and limitation in its current provision. It is not clear that Josie Airey would qualify if she had to apply today, as no one earning over €18,000 per annum would do so. This strict means test, and outdated accommodation and childcare allowances are in urgent need of reform and have not been amended since 2008. There is no legal aid available in discrimination claims, including harassment or race discrimination, no matter how complex the case is, no matter how important the case may be for the person and no matter how significant the resources that the respondent may have to defend a claim. There is also a lack of clarity as to whether legal aid is available in one of the greatest areas of unmet legal need – housing.”

She added: “As a mark of the legacy created by Josie Airey, and in respect of the calls for reform of our legal aid system – made by Chief Justice Frank Clarke, the Joint Oireachtas Committee on the Reform of the Family Law System, and the Legal Aid Board itself – the Government should now bring forward the necessary reforms to rebalance our justice system.

“It takes tremendous courage and persistence to take on the State or a big institution in the search for justice. Often rights and services go denied because those who are shut out are disadvantaged because of their status and means.  It is rare, but of huge societal significance, when people like Josie Airey come forward, with courage, dignity and determination, and take on the State.

“People need to be supported to litigate when their rights are being denied. Our justice system is driven by cases that are underpinned by the assumption that litigants will have legal representation. Increasingly legal representation is beyond what most individuals can afford.  The more marginalised and disadvantaged individuals are, the more inaccessible justice becomes.”

Since its establishment in 1969, FLAC has been involved in a number of ground-breaking legal actions that have altered the human rights landscape in Ireland. As well as the Josie Airey case, it also played a part in a series of cases seeking arrears in social welfare payments, including what was – at the time – the largest representative action in the history of the State when it claimed for arrears in social welfare payments for 1,800 women, leading to equality in social welfare entitlements for men and women in Ireland. After a long legal battle, Lydia Foy received her birth certificate recognising her female gender, paving the way for the reform of gender recognition laws in Ireland. More recently, FLAC has been involved in significant cases on direct provision, debt, housing and homelessness, and privacy.

Ms Barry also pointed towards the Legal Aid Board being hindered in its work by long delays in the provision of legal aid to prospective clients. “There is a waiting time for a first appointment with a solicitor of 61 weeks in Finglas and 33 weeks in Tralee. This is not acceptable where people’s lives and livelihoods are at stake. We are calling on the Government to urgently invest in the legal aid system, so that people across the country can access justice,” she said.