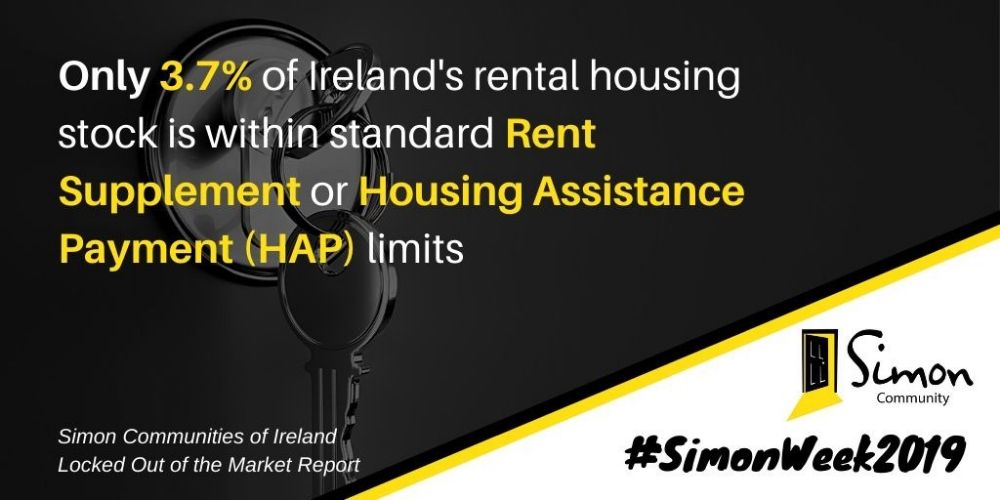 A new report by the Simon Communities of Ireland has revealed that on average just 3.7% of rental housing stock across the country is within standard Rent Supplement (RS) or Housing Assistance Payment (HAP) limits. The charity’s latest ‘Locked Out of the Market Report XV’, a snapshot study on ‘The Gap Between Rent Supplement/HAP Limits and Market Rents’, reveals that just 55 out of 1,491 properties surveyed in 16 areas over a three-day period from 30th July – 1st  August 2019 on Daft.ie, were affordable for those in receipt of standard Government assisted housing payments.

This is the 15th edition of the charity’s ‘Locked Out of the Market’ series, and the first to examine the impact of discretionary* top-ups introduced in July 2016 for RS / HAP recipients. The study was extended to include five new areas for the first time: Dublin City North, Dublin City South, Limerick City Suburbs, Galway City Suburbs and Cork City Suburbs. Four household categories were included in the study: single person; couple; couple/one parent and one child; couple/one parent and two children. The report finds that:

Other key findings include:

The ‘Locked Out of the Market XV’ report is being launched as part of Simon Week 2019, which draws to a close today. The aim of Simon Week is to highlight that an end to homelessness is possible, but it requires shifting the focus from a mindset of ‘dealing with’ to ‘ending’ homelessness. To do this, effective long-term measures need to be put in place: new options and new solutions, such as sustainable cost rental accommodation to meet intergenerational needs – must become the new norm.

The ‘Locked Out of the Market XV’ report and the Simon Communities Pre-Budget Submission are available to download www.simon.ie/publications/research.