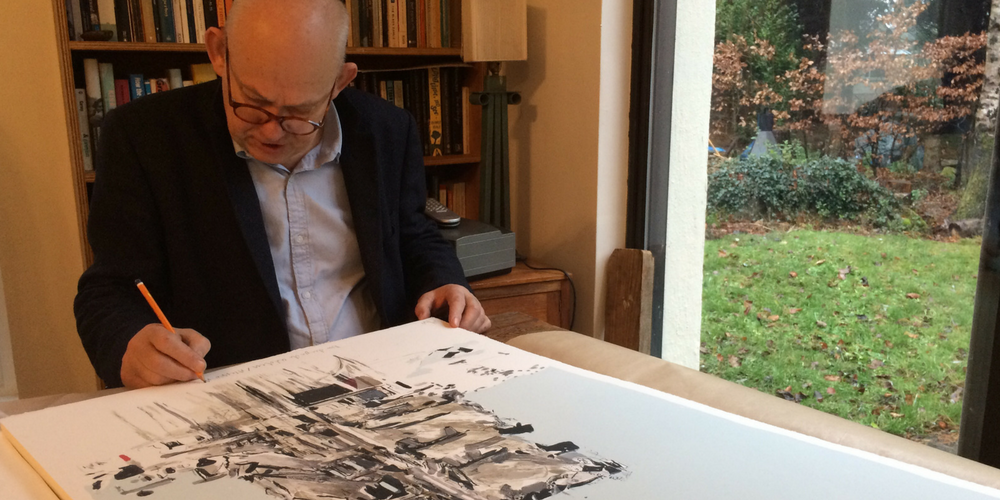 The Mary Raftery Journalism Fund (MRJF) is delighted to announce a new fundraising collaboration with artist Brian Maguire who has kindly agreed to donate the proceeds from the sale of his unique print ‘War Changes Its Address – Aleppo March 2017’ to the Fund.

The print is based on a work featured as part of a new exhibition by Brian Maguire, ‘War Changes Its Address: The Aleppo Paintings’, an extraordinary group of paintings resulting from a visit to Syria in 2017. The exhibition runs in the Irish Museum of Modern Art (IMMA) from Friday, 26th January until Sunday, 6th May.

The print is limited to an edition of 60 signed and numbered copies by the artist and will be the only print made of the group of paintings. Supporters of this partnership between Brian Maguire and the MRJF will acquire an exclusive print that is both a significant example of the artist’s work while making an important contribution to the work of the Fund.

The MRJF was established to continue the work of the campaigning writer and television producer after whom it is named, by supporting investigative journalism that gives voice to the powerless and challenges the powerful, as Mary did throughout her career. Brian Maguire’s work as an artist has similarly combined empathy with individual human suffering and an intense awareness of political and social justice.

The Fund awards bursaries for specific journalism projects, promotes educational events including an annual seminar in collaboration with the Irish Film Institute, RTÉ and the BAI, and is working with Dublin City University on the development of the Mary Raftery Archive.

For further information on how to purchase a copy of ‘War Changes Its Address – Aleppo March 2017’ by Brian Maguire, please email info@maryrafteryfund.ie or call Eleanor McGovern on 01-4200580.