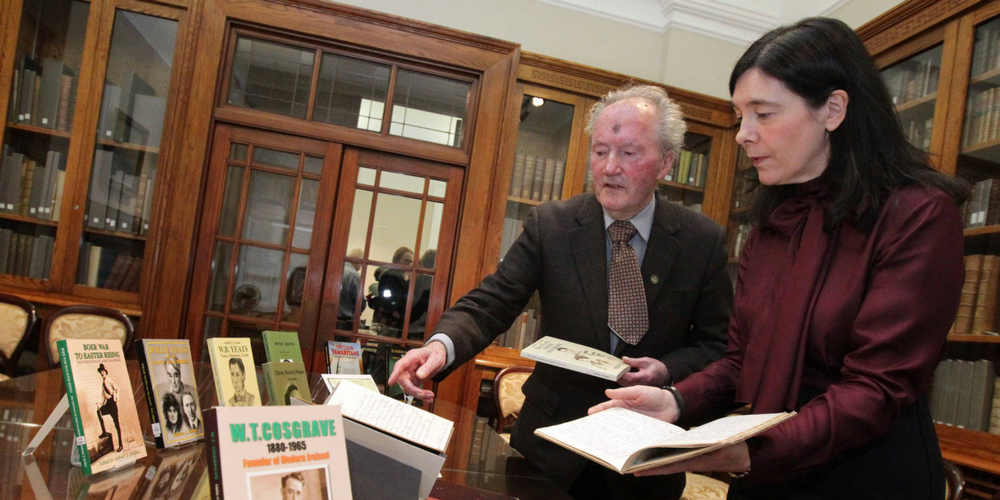 The National Library of Ireland (NLI) has announced receipt of the archive of Irish writer and historian Anthony Jordan. The archive is an extensive record of Mr Jordan’s writing career and working life in education, and includes correspondence from literary and political figures including Nobel laureate Seamus Heaney, actor Daniel Day Lewis and peace activist Una O’Higgins O’Malley relating to his work.

A native of Ballyhaunis, Co Mayo, Mr Jordan has published biographies on prominent public figures including former prime minister of the UK Sir Winston Churchill, former president of Ireland Éamon de Valera and painter and writer Christy Brown. Highlights from his archive include:

The donation was marked with a special event in the NLI today and follows a previous donation made by Mr Jordan in 2002.

Speaking at the event, Mr Jordan said: “The Library is an invaluable national cultural institution and an essential site of knowledge and learning, one which I have taken advantage of for many years so I feel it is a fitting home for my archive. Some of my most exciting moments of research occurred in the NLI, and I hope that my manuscripts, and the correspondence that has informed my work, inspires future readers and researchers.”

Commenting, Director of the NLI, Dr Sandra Collins, said: “Through Anthony Jordan’s work, generations of readers have gained insight into figures who have shaped modern Irish society and culture. We’re delighted that he has chosen to donate his archive to the National Library where it will be preserved and accessible for generations to come.”