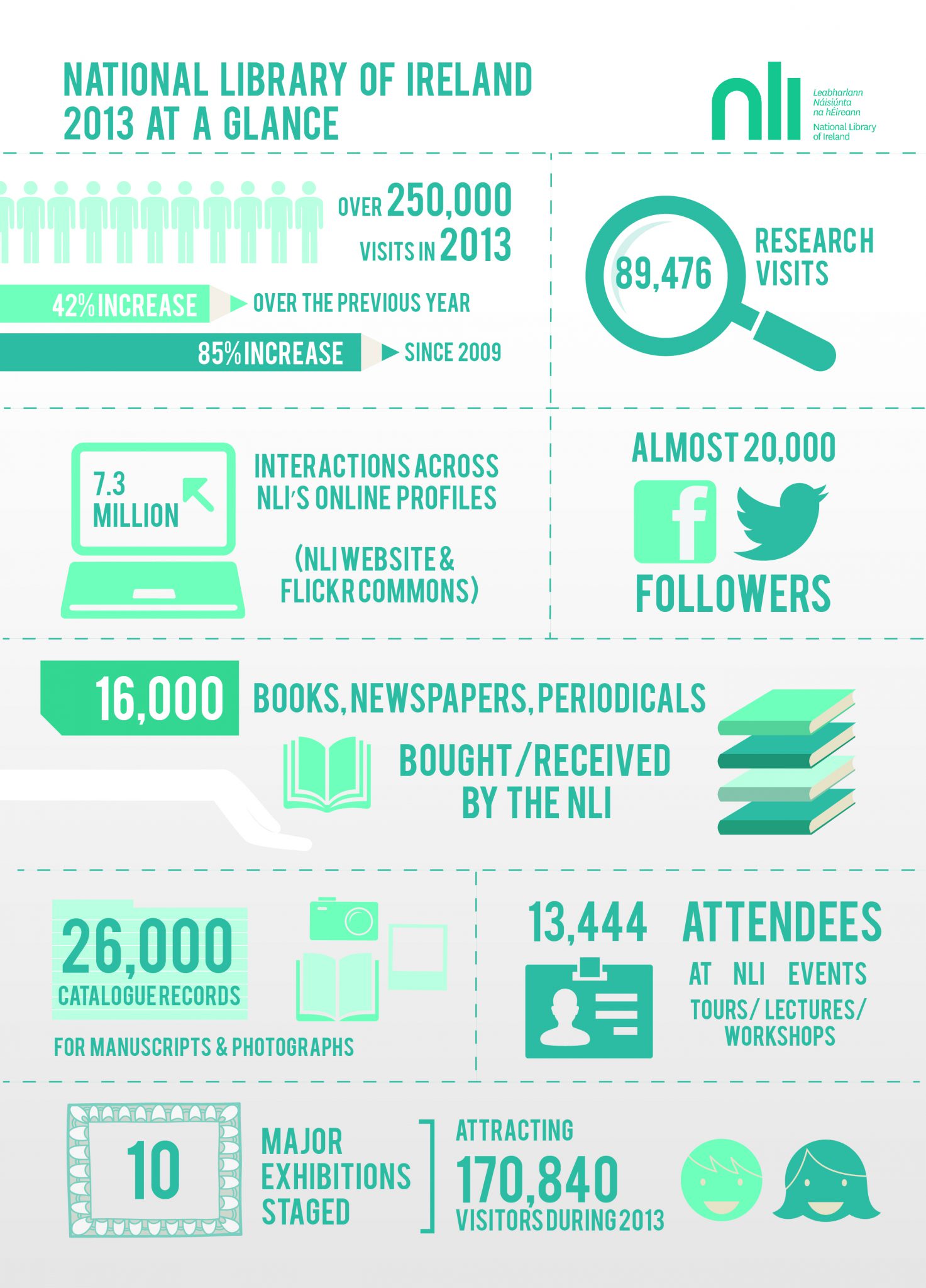 The National Library of Ireland (NLI) has said it is still achieving good results and bringing important collections to the public, despite continued hard times.  The Library published its 2013 Annual Review today (03.09.14).

The Minister for Arts, Heritage and the Gaeltacht, Heather Humphreys, TD, officiated at an event to mark its publication.

Speaking at the event, Acting Director of the NLI, Catherine Fahy, said: “2013 shows a Library that’s still achieving good results and bringing important collections to the public.  Hard times continue, but today is an opportunity to recognise the achievements that the NLI has made against the odds.”

Key highlights from the 2013 review include:

Reflecting on the work of the NLI in 2013, Catherine Fahy said: “We realise the huge resource that we are charged with caring for and curating, in both the beautiful buildings from which we operate and the invaluable collections that we purchase and receive.  Digitisation, coupled with the accessibility of our buildings and our opening times, are among the ways in which we work to give the public every opportunity to engage.  We continue to develop programmes and activities that grow public awareness of what the Library does and offers.  Our visitor numbers and online interactions are clear evidence that we’re achieving considerable success in public engagement.”

However, Ms Fahy, said that the Library was still facing significant challenges:  “The NLI is facing huge challenges, and it is of considerable concern that since 2008, we have suffered from year-on-year funding cutbacks, and now receive 44 per cent less funding than we did five years ago. Coupled with decreasing numbers of staff and increasing demand for our services, this means we are being squeezed from all sides.

“Diminishing resources put collections and services at risk.  While we work tirelessly to maintain both, we are at a critical point,” added Ms Fahy.

Also speaking at the launch of the NLI’s 2013 Annual Review today, Heather Humphreys TD, Minister for Arts, Heritage and the Gaeltacht, said, “I am hugely impressed by the high level of activity at the NLI over the last year. The number of people visiting the Library increased by a massive 42%, and I have no doubt that this success was down to the quality of exhibitions on display, such as the JFK Homecoming exhibition and the internationally acclaimed Yeats collection.

“I would like to commend the progress made by the NLI during a time of economic challenges. The NLI has weathered considerable funding cuts in recent years with a determination to continue providing high quality exhibitions, free of charge, to the public. The Government’s efforts to put the country back on a solid financial footing will benefit not just the economy, but institutions like the NLI, which play such an important role in preserving our culture and heritage.”

The mission of the National Library of Ireland is to collect, preserve, promote and make accessible the documentary and intellectual record of the life of Ireland and to contribute to the provision of access to the larger universe of recorded knowledge.  It is open, free of charge, to all those who wish to consult the collections for material not otherwise available through the public library service or an academic library. The Office of the Chief Herald in Kildare Street, and the National Photographic Archive in Temple Bar are all part of the National Library.