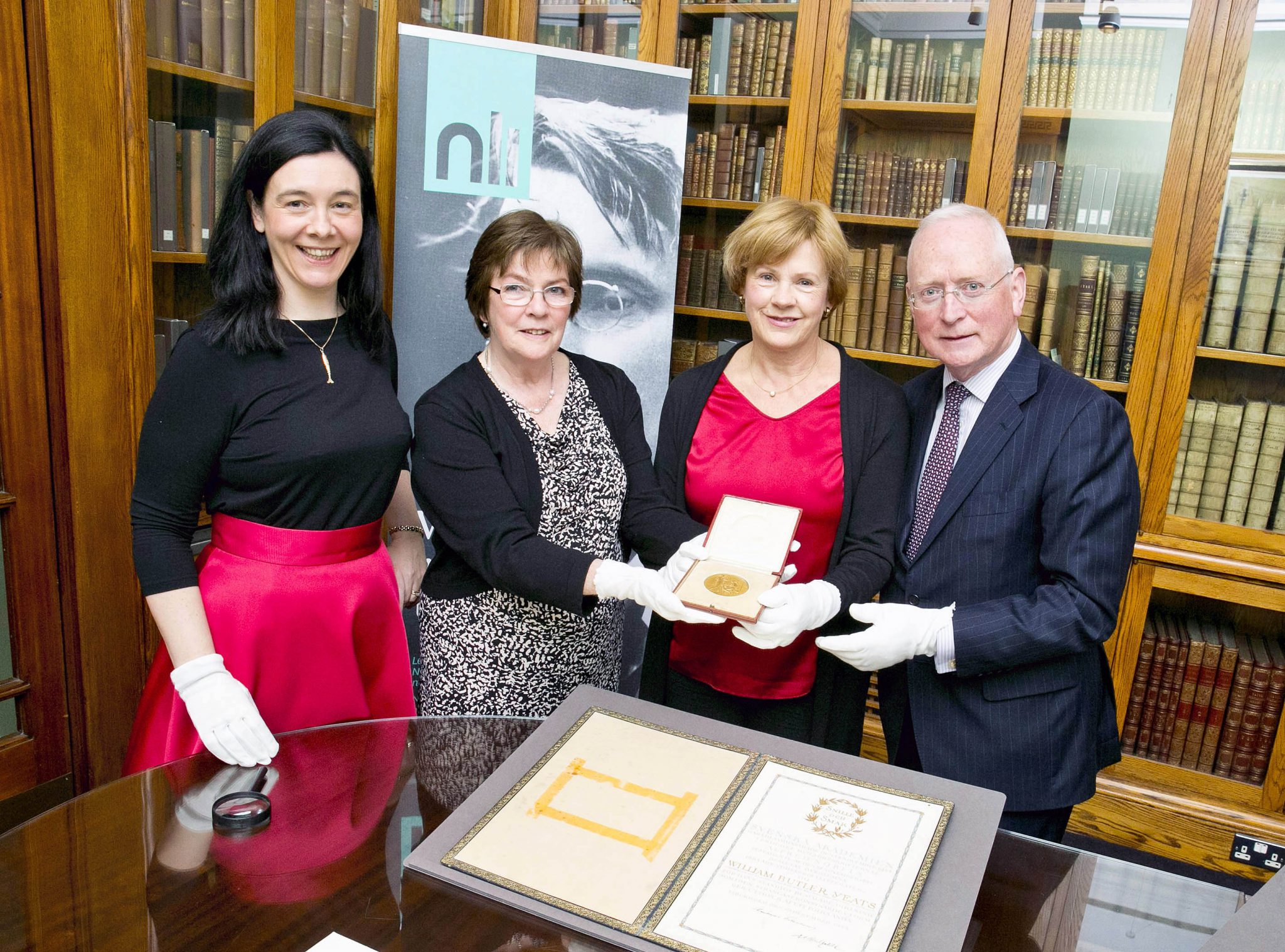 The National Library of Ireland (NLI) has today (28.04.16) announced the receipt of the medal awarded to W.B. Yeats for winning the Nobel Prize in Literature. The medal, valued at €1.5m, and the accompanying diploma were donated to the Library by the Yeats family and were received at a special event at the NLI this afternoon.

W.B. Yeats was awarded the Nobel Prize in Literature in 1923 for his “always inspired poetry, which in a highly artistic form gives expression to the spirit of a whole nation”1. In his presentation speech, Per Hallström, then Chairman of the Nobel Committee of the Swedish Academy, praised Yeats’s ability to “follow the spirit that early appointed him the interpreter of his country, a country that had long waited for someone to bestow on it a voice”. Yeats himself considered the award of the prize as less for himself than his country, calling it Europe’s welcome to the Free State, which is particularly poignant in this decade of commemoration.

The Yeats family has been a longstanding supporter of the NLI and facilitated the Library’s acquisition of W.B. Yeats’s personal library in 2002. The family also donated a substantial collection of editions of the works of W.B. Yeats to the Library, along with biographical and critical works. Thanks to a series of gifts from the Yeats family, the Yeats Collection at the National Library is now the largest archive of Yeats manuscripts and books in the world.  The collection is at the heart of the award-winning exhibition: Yeats: The Life and Works of William Butler Yeats which is free and open to all. More than 66,000 visitors attended the exhibition in 2015. Included in the display are original manuscripts of his poems and plays, material relating to the occult and examples of his automatic writing.

“The donation also highlights the importance of tax reliefs such as Section 1003 of the Taxes Consolidation Act, 1997, which relates to the donation of important national heritage items to the Irish national collections. Since the introduction of the tax relief, the National Library has been fortunate to receive a number of very valuable collection items, including manuscripts of James Joyce’s ‘Finnegans Wake’ and the Sean O’Casey archive.”

Granddaughter of W.B. Yeats, Catríona Yeats, who attended today’s event, added: “The donation of the W.B. Yeats Nobel Prize medal and citation to the National Library of Ireland, together with related letters and telegrams of congratulation to the poet on his winning the award, continues a longstanding family tradition and we are delighted that the medal will be added to the Library’s Yeats Collection.”