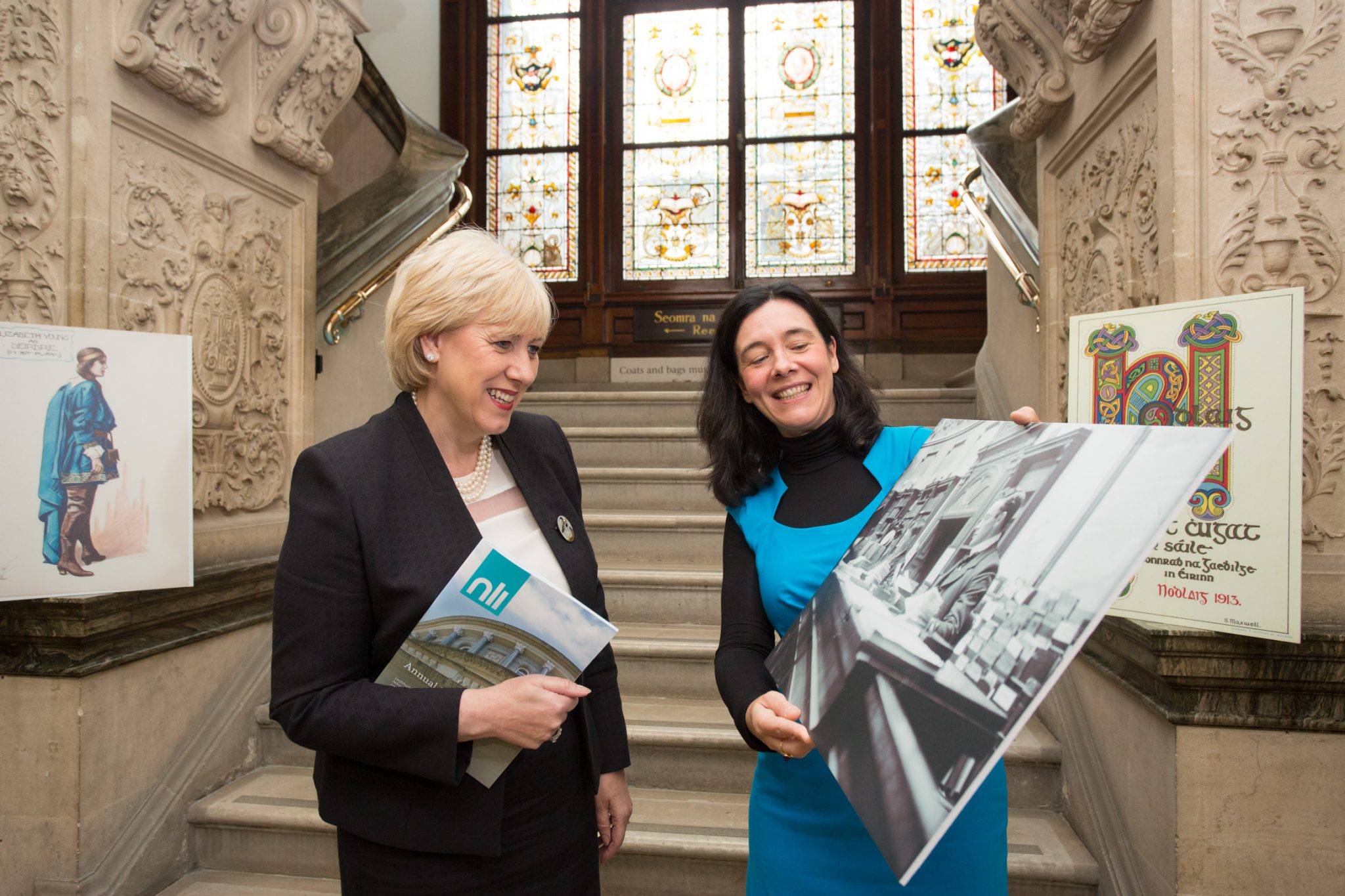 The National Library of Ireland has made significant achievements in increasing access of collections to the public, services for researchers, high quality exhibitions, outreach activity and an ambitious digitisation programme, despite their limited resources both from a staff and financial perspective. That’s according to the NLI’s Annual Review 2014, which was launched at an event today (07.09.15).

The Minister for Arts, Heritage and the Gaeltacht, Heather Humphreys, TD, officiated at today’s launch to mark its publication, which is the second year the NLI has published the Annual Review.

Speaking at the launch of the NLI’s 2014 Annual Review today, Heather Humphreys TD, Minister for Arts, Heritage and the Gaeltacht, said, “I am hugely impressed by the level and breadth of activity that the NLI has engaged in over the past year. Visitor numbers have steadily increased, with online visitors increasing by an impressive 115% in 2014. This is a clear indication of the quality and popularity of the Library’s significant digitisation programme, which is making the Library’s fascinating material available all over the world.

“The Library’s successes are a testament to the professionalism and dedication of its staff and the quality of the services and exhibitions they provide. The National Library is an essential part of Ireland’s cultural infrastructure. I see the Library moving into a new phase as we put the difficult years of cutbacks behind us, and of course the NLI will play an important role in the 2016 commemorations next year. I look forward to working closely with the NLI over the coming year, and I welcome the newly appointed Director Dr Sandra Collins, particularly as we work on the development of the Ireland’s first national cultural policy, Culture 2025.”

Speaking at the event, the recently appointed Director of the NLI, Dr Sandra Collins, said: “2014 was a year of significant achievements, encompassing our digitisation work for the Decade of Commemorations, securing remarkable archives and presenting wonderful exhibitions on aspects of Irish life and identity for all to enjoy.

“In presenting these achievements, we must acknowledge that the Library has had to be very resilient in the face of scarce resources. As highlighted in the review, comparatively when set against our European counterparts, the NLI is significantly less resourced in terms of workforce and capacity. This is not just a trend that has emerged from the economic downturn, it is a legacy issue. The Library has always worked from a low-base in terms of resources.

“We are now moving into a new phase. The opportunity of the first national cultural policy is very significant and we are delighted the Minister is leading this initiative, and the Library will be contributing to the consultation of this policy. Our National Library should be at the heart of Ireland’s culture and of a national cultural policy; it is the keeper of our country’s story and memory; it is the repository for collections of national and international importance; it is a place of record and reference for future generations. The Library’s collections inform our understanding of history, culture and heritage. We believe a strong Library must be a foundation stone of our cultural life and policy, more than ever in this Decade of Commemorations.”

Key highlights from the 2014 review include:

Speaking on behalf of the outgoing Board of the National Library of Ireland, Paul Shovlin commented, “The importance of the digitisation programme which took place throughout 2014, particularly the Catholic Parish Registers project, cannot be overstated. Making these records freely accessible to the public online, and increasing ease of access to our services, is critical to the NLI’s role in Irish society. As the Board’s term of office concludes, we regard the Parish Registers project as one of the most ambitious and substantive projects in the Library’s history.

“We are extremely grateful to our donors, without whom we simply would not have been able to acquire a significant number of important papers, archives and materials. We remain concerned about under-resourcing also from a staff perspective and we continue to operate in a building not fit for purpose, which has limited us in acquiring collections of significant cultural and heritage importance. Nevertheless, the Library continues to grow public awareness, with visitor numbers and online interactions rapidly increasing – a clear indicator of our success in public engagement. However the NLI needs the staffing, financial resources and a fit-for-purpose building if it is to operate effectively in the 21st century.”