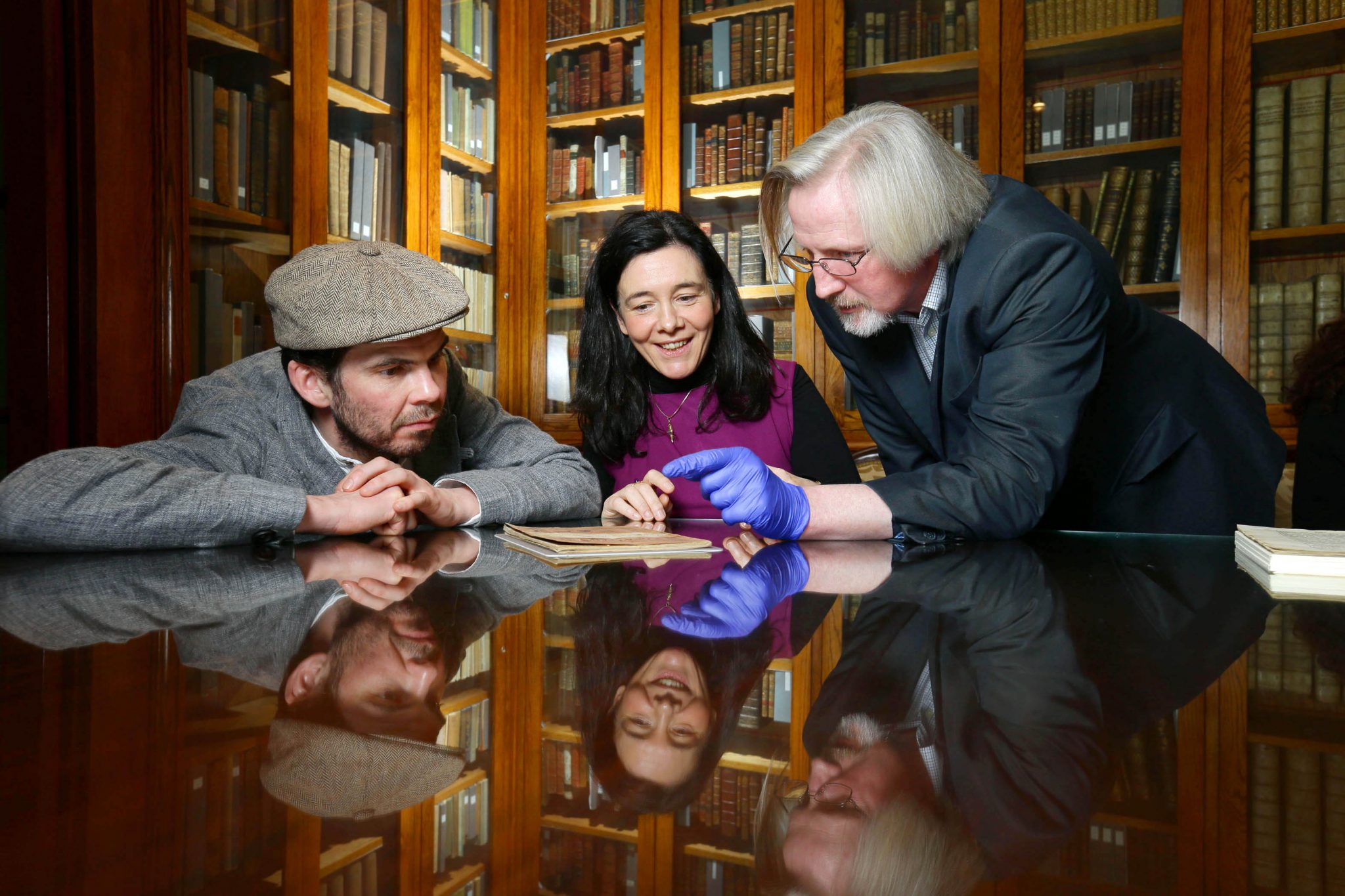 The National Library of Ireland (NLI) has today (19.02.16) announced the arrival of the first draft of Sean O’Casey’s play ‘Juno and the Paycock’, acquired at a Sotheby’s auction in December 2015. Regarded as one of the most significant works of Irish literature, the manuscript was officially received at a special event at the NLI today. The cast members of the current Gate Theatre production of the play, were also in attendance at the event.

The 62-page manuscript was acquired in December 2015 by a phone bid placed for the NLI in a rare books auction at Sotheby’s in Manhattan for the sum of €174,484.25 excluding VAT. The acquisition was supported by special allocation funding from the Department of Arts, Heritage and the Gaeltacht (DAHG) and the NLI Trust.

The manuscript contains a handwritten draft of Acts I and II of ‘Juno and the Paycock’, fragments of Act III, listings of characters, notes and a synopsis of the play. The autographed manuscript is in a school notebook, with the title ‘Juno and the Peacock’ on the front cover, and differs substantially from the published version. The manuscript was owned by the late Robert S Pirie, an American lawyer and one of the world’s leading book collectors, who died in January 2015.

Speaking at the announcement today, Dr Sandra Collins, Director of the National Library of Ireland, said: “We are delighted that this unique manuscript is now safely homed in the National Library. It represents a very significant addition to the NLI’s O’Casey collections, joining a substantial holding of O’Casey papers and his personal library, writing desk and other artefacts that really tell the story of this outstanding Irish playwright.

“We are very grateful that Minister Humphreys and the Department of Arts, Heritage and the Gaeltacht together with the NLI Trust made this acquisition possible. This beautiful piece of Irish history and literature is as relevant for Irish actors and audiences today as it was in 1923”

The collections relating to modern Irish theatre and drama are among the great treasures of the NLI’s collections, and last year’s auction represented an opportunity for the NLI to acquire one of the masterpieces of Irish theatre, by one of its leading playwrights. First produced in the Abbey in 1924, ‘Juno and the Paycock’ is considered one of the great plays of the twentieth century.

Minister for Arts, Heritage and the Gaeltacht, Heather Humphreys, TD, commented: “This is a very exciting time for the Library, as it takes possession of this historic Sean O’Casey manuscript. I was delighted that my Department was in a position to part-fund this acquisition, which will be a fantastic addition to the national collection.

“2016 promises to be a very positive year for the National Library. The Library will, of course, play a central role in the Ireland 2016 Centenary Programme and plans will also be progressed for the €10 million project to upgrade the Library’s historic buildings on Kildare Street. This will be the first significant investment in the Library in decades, which has only been made possible thanks to the economic recovery.”

Today’s event was attended by actors Declan Conlon, Derbhle Crotty and Marty Rea, who are currently starring in the Gate Theatre production of ‘Juno and the Paycock’. Commenting today, Declan Conlon said: “It’s been a huge honour to be a part of the legacy of one of Ireland’s most iconic plays.  As an actor, when you’re rehearsing and performing, it’s an intense experience – you’re living and breathing the play. I’m delighted to have this opportunity to see first-hand the earliest draft of ‘Juno and the Paycock’ in O’Casey’s handwriting, which brings it to life even more so for me. It’s fantastic that the National Library has acquired this on behalf of the nation – the work the Library does in preserving the intellectual record of the life of Ireland is invaluable.”