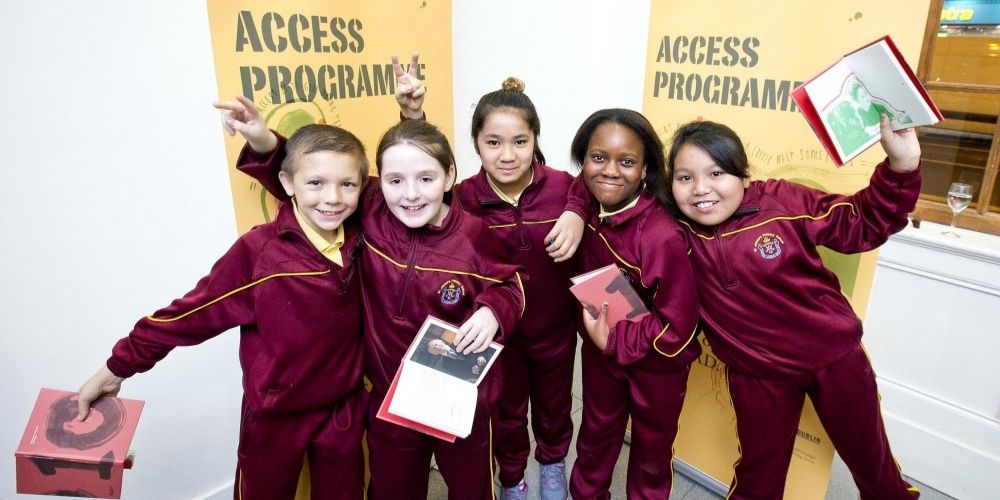 The National College of Art and Design (NCAD) celebrated the tenth anniversary of its Access Programme at an event in the College. Marking the occasion, which was attended by Tánaiste and Minister for Social Protection, Joan Burton TD, a new partnership between NCAD and property company Kennedy Wilson was launched.

According to Director of NCAD, Professor Declan McGonagle: “Since NCAD commenced our Access Programme in 2005, we have developed links with local schools and community groups so that interest in creative studies is piqued and that the transition into third level participation is made seamless.”

“NCAD’s Access Programme offers support for entry and progression into third level Art and Design for those who due to social and economic disadvantage may not have the opportunity to go to college. Since its establishment in 2005, two thirds of graduates who came through the Access Programme have obtained a 2.1 Honours Degree, and 20% progressed to post-graduate study at NCAD.”

The Access Programme has established links with 22 primary schools and 34 secondary schools through its Access Days, shadowing and mentoring programmes, and every year over 500 primary school children visit NCAD and participate in tours of the NCAD Graduate Show. NCAD Access collaborates with young people from the Rialto Youth Project through providing Easter and Summer Arts projects, and has established a partnership with the Digital Hub Development Agency in running ‘Future Creators’, an after-school digital media  project for teenagers from the local area.

“At the heart of our programme is to promote creative talent across all age groups, with a view to widening participation in higher education art and design and establishing careers in the art and design sector.”, said Professor Declan McGonagle.

Officiating at the event was An Tánaiste and Minister for Social Protection, Joan Burton TD, who said: “As Irish Design 2015 comes to a close, we are more aware than ever of the value that the art and design sector brings culturally and economically to Ireland.

“Over the past ten years, NCAD’s Access Programme has opened up opportunities to follow a career in art and design to those who, due to social and economic difficulties, might not have previously had the chance and the support to do so. The integrated approach of this programme in developing, fostering and supporting an interest and passion in art and design, from primary school right up to postgraduate level, is to be commended.”

Commenting on the new partnership between NCAD and property company Kennedy Wilson, Professor Declan McGonagle said: “To coincide with our ten-year anniversary, we are very pleased to announce a collaboration with Kennedy Wilson that will provide for a nine-month residency to four graduates in Clancy Quay.  As such, this extends our Access Programme to the workplace.  With the school, community and residency dimensions, our programme is reflective of a life-cycle approach. The College is proud of the achievements of its students and its graduates, some of whom will now benefit from the generous allocation of studio space by Kennedy Wilson in 2016. NCAD is grateful too for the network of relationships with other institutions which facilitate important opportunities for people to challenge barriers to fulfilling their own potential as individuals – as artists, designers, as educators in society.”

Peter Collins, Managing Director, Kennedy Wilson said: “Kennedy Wilson is delighted to partner with the National College of Art and Design, through its support of the Access Programme to provide a nine-month residency to four graduates at Clancy Quay. As a company we have a strong heritage in supporting cultural and artistic initiatives in the communities in which we work. For example, we have partnered with Dublin City Council to provide seed capital for a new city library on Parnell Square, and we are also leading the fundraising effort to secure the finances to deliver the project. As property owners and members of the local community in Dublin 8, we are delighted to be able to provide space for an NCAD initiative and we are excited to see what the artists will create during their residency.”