DHR Communications has recently been working on two initiatives which provide students in Ireland with once-in-a-lifetime opportunities to advance their future careers.

This week saw the launch of DARE2BDRINKAWARE.ie 2013, with DHR Communications coordinating a unique photocall featuring tributes to some of Hollywood’s most famous names,  past and present. 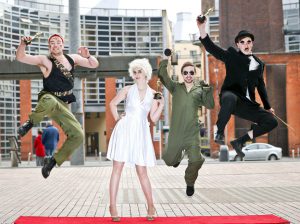 Diarmaid Kiernan from Rathfarnham as Rambo, Robyn Lakes from Dundrum as Marilyn Monroe , Liam Robinson from Finglas as Top Gun and Colm Reid from Skerries as Charlie Chaplin pictured at the launch of DARE2BDRINKAWARE.ie 2013 at the Lighthouse Cinema, Dublin. Pic:Marc O’Sullivan

DARE2BDRINKAWARE.ie is a film and multimedia competition for third-level students, aimed at promoting the responsible use of alcohol.  It has been run on an annual basis for the past six years.  For the 2013 competition, students are being invited to submit film and multimedia entries on the theme of ‘pacing our drinking’.

The innovative competition is open to all third-level students over the age of 18.  Entries for the competition can be produced in the form of a short film or interactive website.  Entries must focus on pacing our drinking, aligning the competition’s aim of promoting the responsible use of alcohol and / or challenging anti-social drinking behaviours.

Students interested in submitting an entry to DARE2BDRINKAWARE.ie  have until 23rd November to complete a short proposal, outlining the idea behind their entry.  They will then have until March 2013 to develop and complete their multimedia or film project.  Entries are judged by a high-profile panel of industry experts, and a prize fund of €5,000 is up for grabs in the competition. For more information please see the DARE2BDRINKAWARE.ie website.

Meanwhile, the 2012/2013 Simon Cumbers Media Fund Student Scheme was launched recently by Minister for Trade and Development Joe Costello TD. Now in it’s second year, the student fund has added a new online category, and will provide funding to three third-level students to travel to a developing country next year. 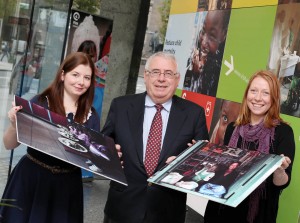 Pictured at the launch of a new online category as part of the Simon Cumbers Media Fund Student Scheme were 2011/12 Winner of the Broadcast category scheme Sarah Moyles from University of Limerick; Minister for Trade and Development Joe Costello TD; and 2011/12 Winner of the Print Category scheme Jekatrina Saveljeva from Ballyfermot College of Further Education, with two of her photographs, at the Irish Aid building on O’Connell Street in Dublin. Pic:Marc O’Sullivan

The Simon Cumbers Media Fund was established by Irish Aid in memory of Irish journalist Simon Cumbers, who was killed in Saudi Arabia while working with the BBC in 2004.  The aim of the fund is to promote more and better quality coverage of development issues in the Irish media.  The student scheme is designed to give students a greater understanding of development issues.

As partners in the scheme, The Irish Times, Newstalk and Storyful.com will publish the work of the successful applicants once they have completed their projects.  In addition to developing a print or broadcast media output, students will be encouraged to produce multimedia projects to include potential coverage in college media outlets and on social media sites.

Under the scheme, students are invited to submit proposals on an issue they would like to research and report on in a developing country.  Proposals must be submitted to the Simon Cumbers Media Fund by Friday, 15th February 2013.  Full details of the scheme are available here.