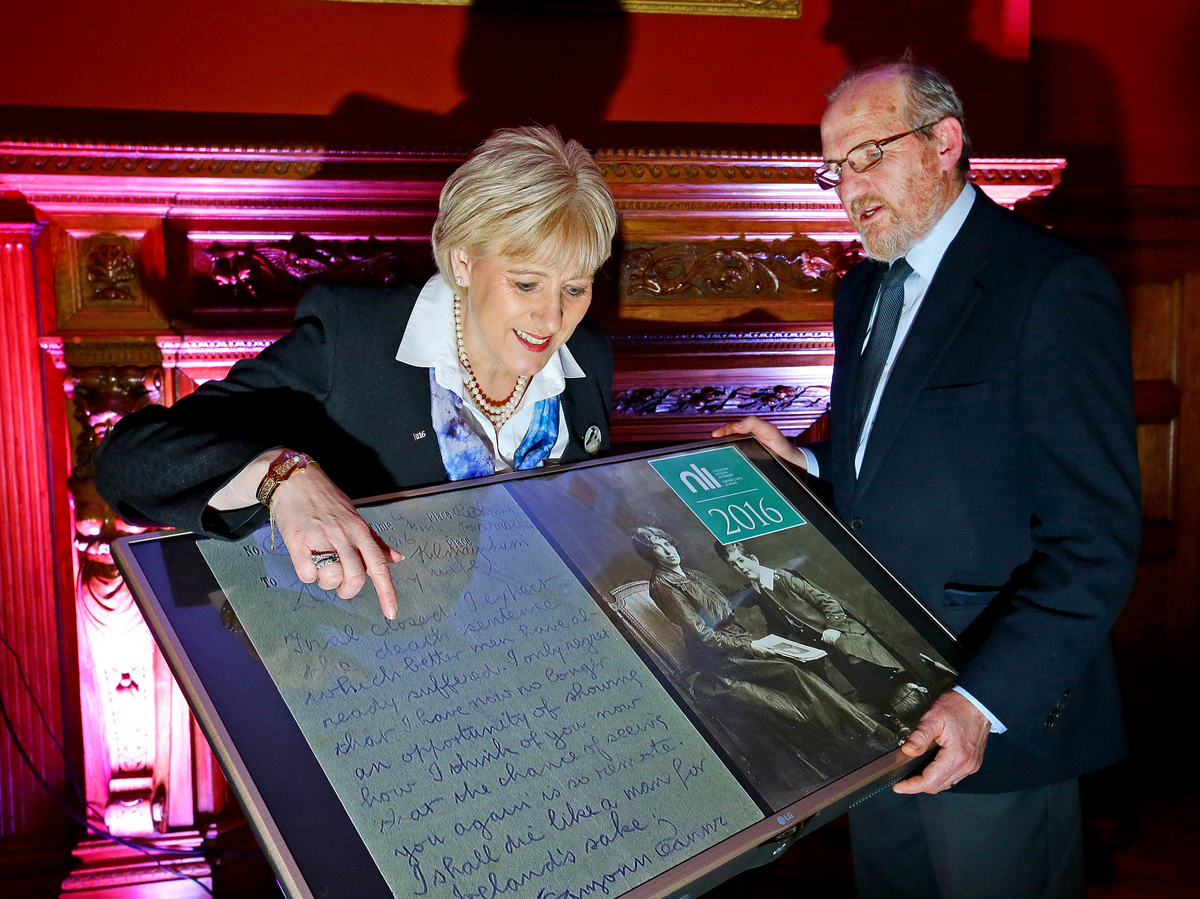 Over 20,000 items related to the seven signatories of the Proclamation will be available online by April 2016

The National Library of Ireland (NLI) has today (07.12.15) launched its 2016 programme, including the release of a unique digital repository of personal papers and photographs that tell the story of the momentous events of 1916. To mark the launch of the programme by Minister for Arts, Heritage and the Gaeltacht, Heather Humphreys, TD, as part of Ireland 2016, a special event presented by Dr John Bowman was held this evening in the Library’s iconic premises on Kildare Street.

Paul Shovlin, Chair of the National Library’s Board said: “In 1916, the National Library was an intellectual and social hub at the heart of Ireland and is proud to take its place in the centenary events 100 years later, through a programme built around our unparalleled collections. We are delighted to contribute to the commemorations by cataloguing and digitising materials that tell the story of 1916, commencing with the seven signatories of the Proclamation.”

Dr Sandra Collins, Director of the National Library, added “At the heart of the National Library’s plans for 2016 is our core mission: collecting and making available Irish memory and heritage for people everywhere. Our 1916 programme is ambitious and includes digitisation, exhibitions and events, and I am delighted that we will be adding to our archive of the Irish internet by capturing websites related to the commemorations for people to explore as a record of this momentous year.”

In addition to the 70,000 digital images already available through the NLI’s online catalogue, the digitised personal papers and photographs of the seven signatories of the 1916 Proclamation – Eamonn Ceannt; James Connolly; Tom Clarke; Sean MacDiarmada; Thomas MacDonagh; Padraig Pearse; and Joseph Plunkett – will be added in the coming months.

The 1916 Digital Collections is a culmination of months of intensive work by the NLI team, and more than 20,000 items will be available online by April 2016. At today’s event, the full collection of Ceannt’s papers was launched and is now available online to the public, free of charge at catalogue.nli.ie.

The digitised papers include diaries, postcards and photographs that tell the stories of the family and working lives of each signatory, alongside dramatic records of their activities during Easter Week 1916.

Speaking at the launch, Minister for Arts, Heritage and the Gaeltacht, Heather Humphreys, TD, said: “The National Library plays such a fundamental role in helping us to connect and remember our past.  The release of the 1916 Digital Collections by the National Library is sure to be a great resource to individuals and groups across the State and beyond who want to mark 1916, or to simply reflect on it. The breadth of material that has been digitised and will be made available online is astounding and represents a hugely valuable record of events leading up to and including the Easter Rising.

“I would like to congratulate the Library on a wonderful and thoughtful 2016 programme of events – which I’m sure will engage and enrich all of those who take part in it, including schools, community organisations, academics and researchers, the culturally curious and lifelong learners of all ages. As one of our nation’s key cultural institutions, the National Library of Ireland – in its physical buildings and online – will be a hub of activity as we mark the centenary of 1916.”

Highlights of the NLI’s 2016 Programme

Katherine McSharry, Head of Outreach and the person responsible for the 1916 programme at the National Library noted: “A rich treasury of papers and documents relating to the historic events of 1916 are held in the collections at the National Library. These documents reveal to us the immediacy of history and we are delighted to make this fascinating repository available – online and free of charge – to people in Ireland and around the world. At the same time as making these historic documents available, throughout 2016 we will be archiving the websites that tell the story of Ireland today.”

In January 2016, the NLI will issue the material related to Tom Clarke and James Connolly papers; followed by Seán MacDiarmada and Thomas MacDonagh in February, concluding with the papers of Patrick Pearse and Joseph Plunkett in March 2016.

The NLI will hold a series of free events and activities throughout 2016 to mark the centenary commemorations of the Easter Rising.  According to Katherine McSharry, there is “something for everyone” and highlights of the NLI’s 2016 programme include:

The NLI will also offer a series of curated perspectives on 1916, onsite at the National Library’s buildings on Kildare Street,  in Temple Bar, and online, including;

Details of the NLI’s full 2016 programme of events, from exhibitions and public events to major digitisation projects and archiving the web, is available on the NLI’s website www.nli.ie.

A selection of papers and photographs relating to Éamonn Ceannt and his family is available online here: http://catalogue.nli.ie/Record/vtls000243484.

The Ireland 2016 Centenary Programme, led by Minister for Arts, Heritage and the Gaeltacht, Heather Humphreys, TD, is a year-long programme of activity to commemorate the events of the 1916 Rising, to reflect on our achievements over the last 100 years and to look towards Ireland’s future.  For more information, visit www.ireland.ie. #ireland2016