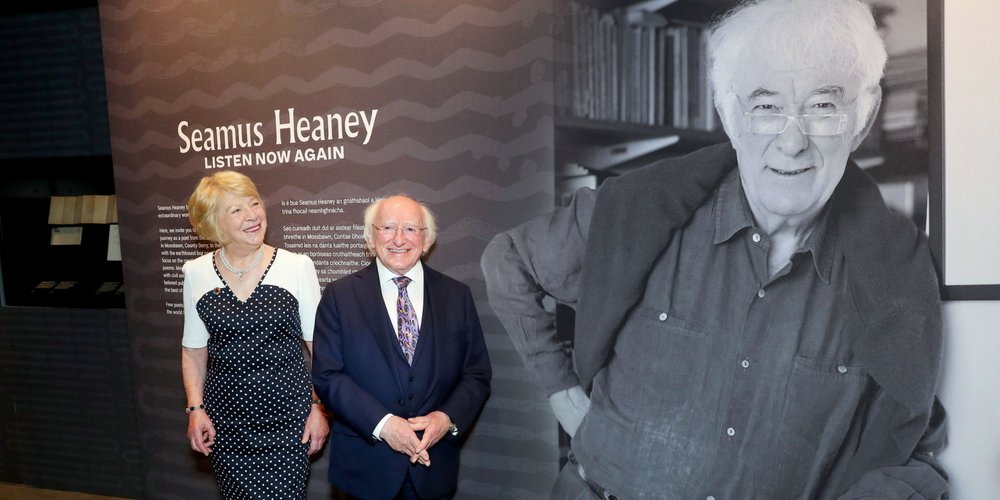 The National Library of Ireland (NLI) is celebrating the launch of ‘Seamus Heaney: Listen Now Again’, a major exhibition that celebrates the life and works of one of Ireland’s greatest writers. It draws on the NLI’s Heaney archive, donated to the Library by the poet and his family in 2011. The exhibition was officially launched by President of Ireland, Michael D Higgins.

A partnership project between the NLI, the Department of Culture, Heritage and the Gaeltacht, and Bank of Ireland, ‘Listen Now Again’ focuses on the poetry for which Seamus Heaney is best known, and features original manuscripts, letters, unpublished works, diary entries, and photographs.  A number of personal objects, such as the desk at which Seamus Heaney wrote in the family’s attic home in Sandymount; a lamp, which once belonged to WB Yeats; and a portrait by Louis le Brocquy, are included in the exhibition.

‘Listen Now Again’ is curated for the National Library by Professor Geraldine Higgins, Director of Irish Studies at Emory University, and designed by Ralph Appelbaum and Associates. This intimate and immersive visitor experience follows Heaney’s life from his childhood in Co Derry, through to his global renown as a remarkably popular poet. Visitors will be able to explore four main areas: Excavations looks at Heaney’s early life and works, and is followed by Creativity, which examines how he created his poetry and what influenced him. Conscience focuses on Heaney’s struggles to write about violence in Northern Ireland and his engagement with global issues of politics and justice. The exhibition concludes with Marvels, which shows how his later poetry moved towards a sense of uplift and airiness, and also looks at his legacy.

Visitors will experience Heaney’s creative process through animations and touchscreens and will be introduced to some of the sounds and tactile experiences of his childhood and later life. Inspired by the last words Seamus Heaney texted to his wife – ‘Noli Timere’, Latin for ‘Don’t Be Afraid’ – well known visual artist Maser has created a special feature wall on which visitors can write messages. He has also created a sculpture of paper transforming into flying birds, which greets visitors as they enter the exhibition.

Speaking on behalf of the family, the wife of Seamus Heaney, Marie Heaney said: “When he started to think about a long-term home for his manuscripts, Seamus knew that he wanted them to stay in Ireland, and to be available for consultation by scholars and general readers alike. And so, he donated his manuscripts and notebooks to the National Library of Ireland. I know he would be both amazed and delighted by what has been achieved with them here today.”

The Bank of Ireland Cultural and Heritage Centre is a partnership project between Bank of Ireland and the Department of Culture, Heritage and the Gaeltacht. Bank of Ireland will make the space available to the State for a period of 10 years, and it will be used for staging public exhibitions and other cultural events.

Minister for Culture, Heritage and the Gaeltacht, Josepha Madigan TD said: “It is my pleasure to open the Bank of Ireland Cultural and Heritage Centre, a very exciting collaborative project between Bank of Ireland and my Department. This iconic building holds a significant place in Ireland’s history, and has been the backdrop against which some of Ireland’s key political and societal events have unfolded.

“With the launch of its inaugural exhibition, ‘Listen Now Again’, this building takes on a new life as a beautiful space for public exhibitions and other cultural events, and it is appropriate that the first exhibition honours one of Ireland’s greatest poets and Nobel Laureates. I would like to thank Bank of Ireland, the Heaney family and the National Library for making this exhibition possible. As Minister for Culture, Heritage and the Gaeltacht, I am delighted my Department could support the National Library in creating ‘Listen Now Again’.”

Speaking today, CEO of Bank of Ireland, Francesca McDonagh said: “We are delighted that the doors to the Bank of Ireland Cultural and Heritage Centre are now open to the public. Bank of Ireland has been part of the fabric of Irish life for over 200 years, and our College Green buildings form a very important part of Ireland’s history and heritage. They have been the backdrop for some of the most important events in Irish history, and I am delighted they will now house an exhibition on the life and work of Seamus Heaney – a poet and writer of such national and international standing.”

Chair of the National Library of Ireland, Paul Shovlin commented: “After many months of planning and working together with all those involved, we are delighted that ‘Listen Now Again’ is opening its doors today. We are very proud that Seamus Heaney and his family chose to give his writer’s archive to the National Library, and this exhibition allows us to share this archive with visitors from Ireland and across the world.

“We have worked closely with the Department of Culture, Heritage and the Gaeltacht and the Bank of Ireland to create this first exhibition at the new Bank of Ireland Cultural and Heritage Centre, and I would like to say a special word of thanks for the generosity and warmth of the Heaney family, who have supported us throughout.”

‘Listen Now Again’ opens on Friday, 6th July, and members of the public will be able to visit Monday to Saturday, from 10am to 4pm. In addition, the exhibition will open on a number of Sundays and other key dates, such as Culture Night. ‘Listen Now Again’ will run in the Bank of Ireland Cultural and Heritage Centre until December 2021.

The exhibition is free and usually no ticket is required. However, for the opening weekend (6th, 7th or 8th July) visitors are advised to book a particular timeslot in advance, as a high level of interest is expected. Bookings can be made via www.nli.ie/seamusheaney.

The exhibition opening coincides with the publication of 100 Poems. Chosen by his family, the volume includes some of the poet’s most loved and celebrated poems. It will be available to purchase at the exhibition shop. (Faber & Faber)