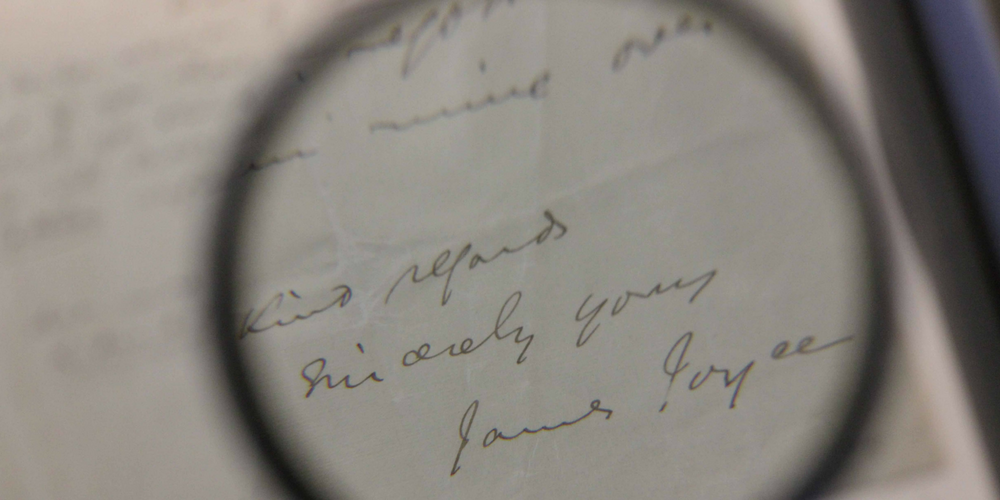 The National Library of Ireland (NLI) has today (27.09.17) announced details of a number of major new Yeats acquisitions. These acquisitions include the purchase from the Yeats family, via Sotheby’s, of more than 500 letters between WB Yeats and his wife George Yeats.

The letters between WB and George Yeats were due to be auctioned by Sotheby’s in London on 27th September. The National Library was offered the opportunity to acquire them for the national collection several months prior to the auction taking place. Agreement was reached that the letters should not be included in the sale, and they are now being purchased privately for €725,000, a purchase made possible by special allocation funding of €500,000 provided by Minister for Culture, Heritage and the Gaeltacht, Heather Humphreys, with the balance covered from the NLI’s own resources.

The letters between WB and George Yeats show many facets of their relationship through more than 20 years. They begin with passionate love letters written in the days before their marriage on 20th October 1917, with Yeats writing to George Hyde Lees on 5th October: “My thoughts are always with you – at first you were but a plan & a dream & then you became a real woman, & then all in a moment that real woman became very dear. And now I watch every post for your first letter. I keep wondering how you will begin it, what you will say.”

Later letters – affectionate and practical – discuss Yeats’ movements, meetings, work (writing, theatrical work, collaborations, occult activities) and the domestic realities of daily life, such as this letter to “My dear George”, saying “This morning when the Valet was setting out my shirt etc we discovered that I had only one vest which is in need of a wash. Can you send me one – if not wire and I will buy one.” Most were written during stays in England and elsewhere, including visits to the USA and with Ezra Pound in Rapallo.

Correspondence from George Yeats to WB Yeats includes interesting letters written during the Irish Civil War, as well as letters discussing the Abbey Theatre, publications, and access for scholars to WB Yeats’ papers. Together with the marital letters, there is a small group of other Yeats family letters.

In addition to the advance purchase of these letters, the National Library today purchased a number of items at auction, for €72,675, supported by funding of approximately €50,000 from a family charitable trust. All of the items were by the poet’s artist father John Butler Yeats, including: a watercolour self-portrait; portraits of the artist’s daughters Susan Mary ‘Lily’ Yeats and Elizabeth Corbet ‘Lolly’ Yeats as adults and sketches of them as children; a pen and ink drawing of WB Yeats’ mother, Susan Pollexfen Yeats, and pencil sketches of George and WB Yeats.

The NLI has also announced the forthcoming donation by the Yeats family of both the remaining Yeats family archive and items currently on loan to the NLI for its Yeats exhibition. The donations will be made under Section 1003 of the Taxes Consolidation Act 1997, the tax relief available in respect to donors of important national heritage items to the Irish national collections.

The donation includes more than 700 letters written by John Butler Yeats to his children, many illustrated with drawings and sketches, and more than 600 letters received by WB Yeats from a wide circle of friends and acquaintances, including many fellow writers such as TS Eliot, Ezra Pound, George Moore, Sean O’Casey, GK Chesterton, and Cecil Day Lewis. Items currently on display in the NLI’s WB Yeats exhibition, including pictures and other items which belonged to WB Yeats, will now be donated to become part of the NLI’s permanent collection.

These letters and objects are the latest treasures in a series of remarkable WB Yeats material acquired by the NLI from the Yeats family over almost 80 years, since George Yeats donated original manuscripts of the poems ‘Oisin’ and the ‘Wanderings of Usheen’ in 1939.

The donations are valued at an estimated €8.4m, while purchases total €1.54m [details of all donations and purchases are included in the Note to Editors below].

Commenting on the acquisitions, Minister for Culture, Heritage and the Gaeltacht Heather Humphreys said: “I am delighted that, over the past number of months, I have been in a position to assist both the National Library of Ireland and the National Museum of Ireland in acquiring significant additional sets of letters, items of furniture and other artefacts. These acquisitions add substantially to the State’s archive of Yeats material.  The co-operative approach in managing the acquisition between the Museum and Library will also allow for major exhibitions to be held in the future using the collections of both institutions.”

NLI Director, Dr Sandra Collins added: “WB Yeats spent many happy years writing in the National Library, so it is really fitting that we hold the most important collection of Yeats material in the world, now enhanced even further by these extensive new acquisitions.

“The Yeats collection is at the heart of our free, award-winning exhibition on WB Yeats, which has welcomed 700,000 visitors since it opened in 2006.  We look forward to featuring the new acquisitions when the much-loved Yeats exhibition is redeveloped as part of our major four-year building programme. We are excited to be able to share these wonderful treasures with all our visitors.

“We are delighted that the National Museum, which has also acquired Yeats material with funds allocated from the Department of Culture, Heritage and the Gaeltacht, will be collaborating with us to lend their new acquisitions to also be featured in our redeveloped exhibition.”

Chairman of the NLI’s Board, Paul Shovlin commented: “The National Library of Ireland is grateful to Minister Humphreys for the allocation of €500,000 in special funds to enable this excellent acquisition for the Library. The Library’s collections continue to grow with some exceptionally important additions thanks to Minister Humphrey’s support.”

Speaking on behalf of the Yeats family, Caitríona Yeats said: “The Yeats Family are delighted that the largest Yeats Collection in the world is housed in the National Library of Ireland.  The Nobel Medal he received in 1923, and a vast quantity of Yeats Family papers and books, are now in the Library.  We are pleased that this material is in the safe hands of the Library’s archivists and that it is available to those interested in studying and writing about one of Ireland’s great poets WB Yeats.”