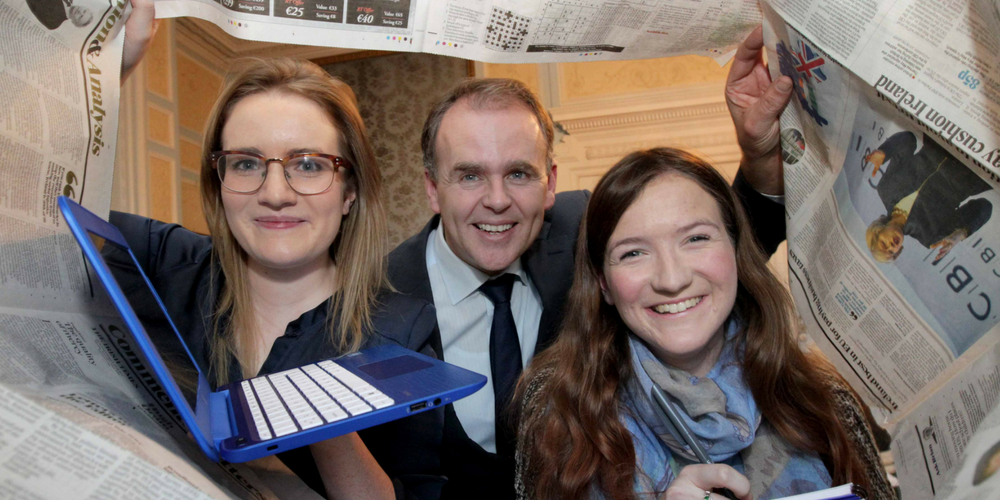 Fund teams up with The Irish Times, Newstalk and TheJournal.ie to provide funding and mentorship

The Simon Cumbers Media Fund is supported by Irish Aid, the Government’s overseas aid programme, and provides funding to students to travel and report from one of Irish Aid’s partner countries.  The Fund provides students with an opportunity to deepen their understanding of developing countries, and facilitates increased coverage of development issues in the media.

Speaking at the launch of 2017 Student Scheme, Minister McHugh said: ”Initiatives like the Simon Cumbers Media Fund are vital for bringing development stories to the forefront of Irish media. The Student Scheme continues to support budding journalists to explore development issues by providing funding to travel to one of Irish Aid’s partner countries and by providing mentorship from experienced journalists. I would urge any third level student with an interest in development issues and journalism to consider applying to the Fund.”

The Fund is once again teaming up with The Irish Times, Newstalk and TheJournal.ie, with the three successful students being mentored by established journalists to develop and deliver their projects. The 2017 Student Scheme mentors are Newstalk producer Susan Cahill; Irish Times Foreign Policy Editor, Paddy Smyth, and TheJournal.ie deputy editor, Christine Bohan.

Now in its sixth year, the Simon Cumbers Media Fund Student Scheme, is designed to give students a greater understanding of the developing world. Previous recipients have reported on topics such as prison overcrowding in Malawi, the use of contraception in Uganda and the problems facing Ethiopia’s female beekeepers and how they are overcoming them.

Student Scheme judge and former RTÉ broadcaster, Rodney Rice said: “The Student Scheme presents students with a fantastic opportunity to gain valuable journalistic experience through travelling to one of Irish Aid’s partner countries on assignment.  For some, it will be their first major step in their career as a journalist and a chance to make connections and receive mentoring that will stand to them as they go forward.

“Development issues are all about people. The judges will be looking for students who show journalistic instinct through their supplied sample work and who present a unique project idea reflecting the modern reality of life in developing countries.”

Applications to the Student Scheme must be submitted online through the Simon Cumbers Media Fund website by Friday, 10th February 2017. Shortlisted candidates will be invited to attend for interview with the three mentors and a representative from Irish Aid. Full details of the scheme are available at: www.simoncumbersmediafund.ie/students.