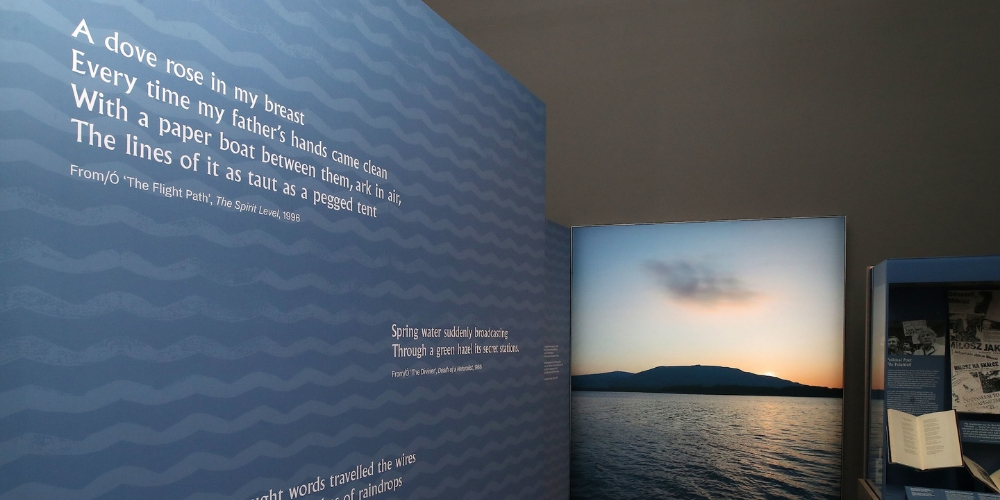 The poems are ‘The Clothes Shrine’, ‘Postscript’, ‘The Railway Children’, ‘Route 110, III’ and ‘Squarings xxxi’. All five poems refer to travel, transport, or the bustle of daily life. They transform the everyday world, so familiar to the commuter, into remarkable words.

Commenting on the initiative, Director of the National Library of Ireland, Dr Sandra Collins said: “Seamus Heaney is one of Ireland’s greatest and most-loved writers, and we are delighted to bring a selection of his poetry to anyone commuting to work or school, or travelling for leisure.

“In his poetry, Seamus Heaney demonstrated a remarkable ability to reveal the wonderful in the ordinary, and we hope this campaign will allow people to take a break, put down their phones and take a moment to enjoy Heaney’s words.

“We also warmly invite everyone to learn more about Heaney and his work at ‘Listen Now Again’, the National Library’s free exhibition at the Bank of Ireland Cultural and Heritage Centre on Westmoreland Street.”

‘Seamus Heaney: Listen Now Again’ draws on the NLI’s Heaney archive, donated to the Library by the poet and his family in 2011, and features original manuscripts, letters, unpublished works, diary entries, and photographs. It is a partnership project between the NLI, the Department of Culture, Heritage and the Gaeltacht and Bank of Ireland, and has welcomed 80,000 visitors since it opened at the Bank of Ireland Cultural and Heritage Centre, Westmoreland Street, last summer.

The exhibition is free to visit and is open Monday to Saturday, from 10am to 4pm (last admission 3.30pm). The entrance to the Bank of Ireland Cultural and Heritage Centre is on Westmoreland Street.