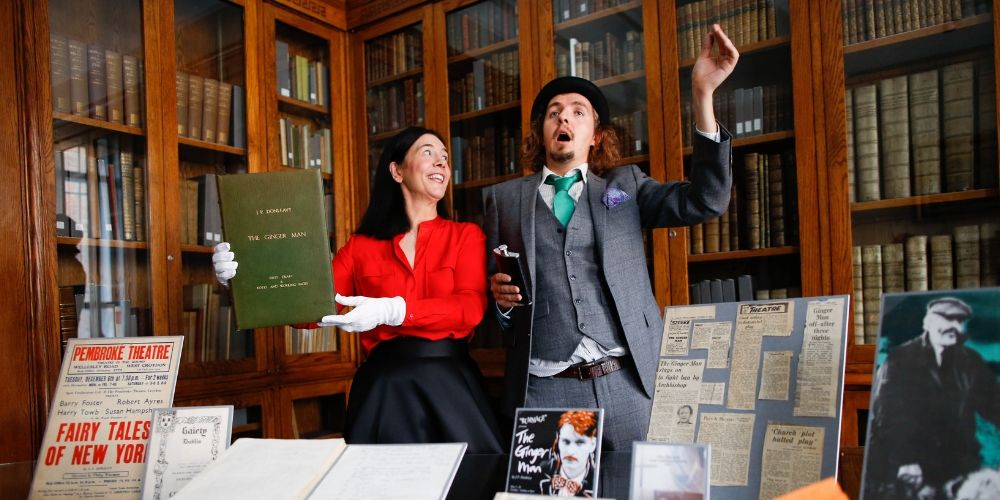 The National Library of Ireland (NLI) has announced receipt of the archive of the internationally renowned, award-winning Irish American author of The Ginger Man, JP Donleavy. The author’s archive is wide-ranging, comprising notebooks, manuscripts, playscripts, letters, theatrical posters and programmes, as well as first editions of the author’s work.

A son of Irish immigrants, Donleavy was born in Brooklyn, New York, in 1926, before moving to Ireland in 1946, having served in the US navy during World War 2. Following time spent studying at Trinity College Dublin, he turned to writing full-time. Donleavy became an Irish citizen at the end of the 1960s and lived in Westmeath until his death in 2017. In 2015, he received a Lifetime Achievement Award at the Bord Gáis Energy Irish Book Awards, and in 2016 he was awarded an honorary doctorate in Letters (Litt.D) by Trinity College Dublin.

Donleavy is best-known for his novel ‘The Ginger Man’, which was first published in France in 1955.  Banned in Ireland on the grounds of obscenity, the book went on to be published in two dozen languages, selling in the region of 50 million copies, and has never been out of print. Today, Donleavy has a worldwide readership in the tens of millions, and is also considered a successful painter and playwright.

Spanning 300 boxes, the donated archive reveals a fascinating career that has spanned decades. Highlights include:

The donation, made under Section 1003 of the Taxes Consolidation Act, 1997, was marked at an event in the NLI today. Speaking at the event, Director of the NLI, Dr Sandra Collins, commented: “JP Donleavy’s work made him a major figure of 20th century Irish writing, with a fascinating circle of literary and artistic friends. In the draft of ‘The Ginger Man’ you can see handwritten notes by his friend Brendan Behan. We are delighted that this archive, which reveals the writer’s work and life over many decades, is joining the National Library’s extensive literary collections. It will be a wonderful resource for all those interested in 20th century Irish writing and in JP Donleavy – the writer and his world.”

Chairman of the Board of the NLI, Paul Shovlin added: “JP Donleavy’s legacy is evident in the sustained popularity of his work worldwide, and we are grateful to the Donleavy family for donating his papers to the National Library of Ireland under Section 1003 of the Taxes Consolidation Act 1997. Irish literary collections are of major international interest, so it is extremely important that Section 1003 makes it possible to add significant heritage materials like this archive to the Irish national collections, where they are preserved and protected now and for future generations.’