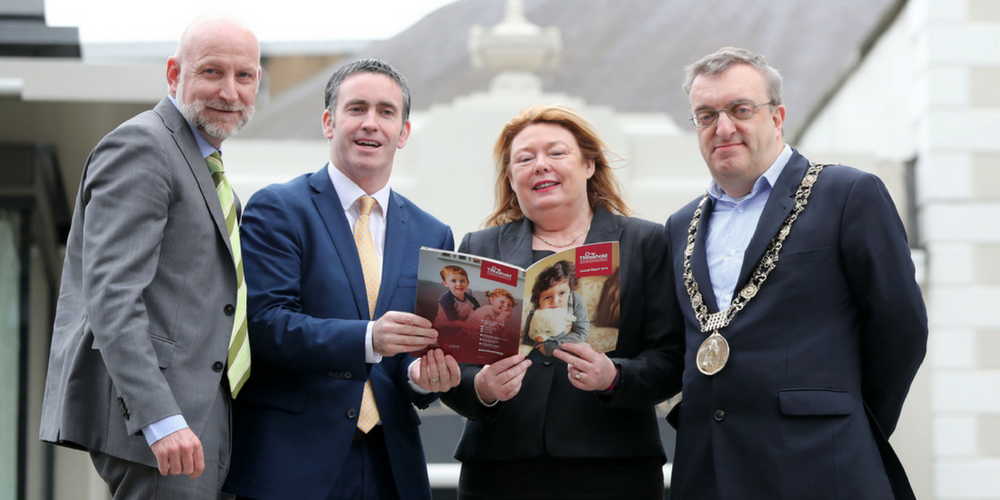 Threshold urges Government to strengthen investment in homelessness prevention measures as it takes more than 71,000 calls in 2016

Threshold urges Government to strengthen investment in homelessness prevention measures as it takes more than 71,000 calls in 2016

National housing charity Threshold took 71,319 calls in 2016 and helped 21,625 people during that time with tenancy issues. The figures are included in its 2016 annual report, which was launched today (27.11.17) by Minister of State for Housing and Urban Development, Damien English TD. Lord Mayor of Dublin, Ardmhéara Micheál Mac Donncha also officiated at the launch, which was held at the Mansion House in Dublin.

Almost a third of calls (29 per cent) to the charity were in relation to situations where clients were at risk of losing their homes. Threshold staff also noted an increased complexity in tenancy-related queries, with many of its clients in need of in-depth support and advocacy. Each housing advisor made an average of six contacts with every client in an effort to deal with their cases.

Speaking at the launch of the report, Lord Mayor of Dublin, Ardmhéara Micheál Mac Donncha said: “The figures presented today by Threshold bring into sharp focus the very real consequences of the housing crisis. However, the charity’s commitment to social justice knows no bounds. I would like to commend Threshold for its tireless efforts to help to ensure that more families can access decent standards of accommodation, affordable rents and security of tenure within our city and throughout the country. Threshold addresses the homeless crisis at the most effective point of the process – prevention. It is important that it has adequate resources to continue this work, advocating on behalf of vulnerable people and standing up to unscrupulous landlords.”

Threshold chair, Dr Aideen Hayden said: “The unprecedented level of calls received by Threshold in 2016 is indicative of the financial and mental distress experienced by those living in the private rented sector, where there remains an acute shortage of supply. Individuals and families find themselves in dire situations as competition for homes at the bottom end of the rented market has led to greater poverty and the emergence of overcrowding and falling standards. We are particularly concerned with the rise of hidden homelessness where people who have already lost their rented homes are living with family members or friends and where the physical circumstances place pressure on relationships, which bring them one step away from homelessness.”

In response to the growing challenges being faced by tenants in the private rented sector, Threshold extended its Tenancy Protection Service (TPS) to Dublin’s commuter counties – Meath, Kildare and Wicklow – and presented the first annual report from the Cork-based Southern region TPS in 2016. The TPS was also rolled out in Galway.

Speaking at the launch, Threshold chief executive, John-Mark McCafferty said: “The Tenancy Protection Service has proven to be highly effective in preventing homelessness and keeping people in their home at a time where the cost of renting, and the scarcity of rental accommodation, is no longer a viable option for many.

“Since the Tenancy Protection Service launched in 2014, Threshold had prevented more than 10,000 people at immediate risk from losing their homes by the end of 2016. In Dublin, we identified 1,425 families as being at imminent risk of homelessness, with 601 families identified in Cork and a further 150 families in Galway. Families were identified as being at imminent risk of homelessness due to rent arrears, being given notice of termination, unaffordable rent increases or threatened illegal eviction.”

Pointing towards continuing challenges in the private rented sector, Threshold has reiterated its call to Government to invest in meaningful measures to address these issues.

Dr Hayden added: “We acknowledge that the Government is introducing measures to tackle this crisis – and I am glad to see that Rent Pressure Zones (RPZs) are beginning to have an effect on rent price inflation. However, renting continues to be a precarious venture in this country and there is much more the Government should be doing to protect tenants. We continue to put forward the idea of an ‘NCT’ system for housing, which would see the burden of proof for compliance with minimum standards rest with the landlord, who would be required to provide a certificate of fitness to the local authority.

“We also acknowledge the Residential Tenancies Board’s publication last week of guidelines regarding ‘substantial change’ in building work on rental property. However, these guidelines fall short of providing certainty to tenants and we call on the Government to introduce a legal definition of this term. We also urge it to put in place measures to stem what seems to be a rising number of ‘renovictions’ – where tenants are evicted to allow for major renovation. Currently, this kind of mass eviction can be used to legally circumvent RPZ laws. The Government needs to introduce measures to discourage this. One way in which this could be done is by ensuring that vacant possession of property is actually required for works to be carried out. If this is the case, landlords should then be obliged to relocate tenants while renovations are taking place.”

She added: “In what has proved to be a very challenging year for our clients, Threshold is extremely grateful to our funders and donors for their continued support of our work. We are committed to putting these resources to best use to inform, advise and assist our clients.”

Launching the report, Minister of State for Housing and Urban Development, Damien English said: “I appreciate the sterling work and commitment of organisations like Threshold, who have been working at the front line for almost 40 years, protecting vulnerable families in the private rented sector. It is thanks to Threshold’s excellent service that we can work in partnership to ensure that tenants are protected. Addressing our housing shortage and the homelessness crisis is the Government’s number one priority. We have a plan in Rebuilding Ireland, it is working and we will continue to work to fix this situation.”