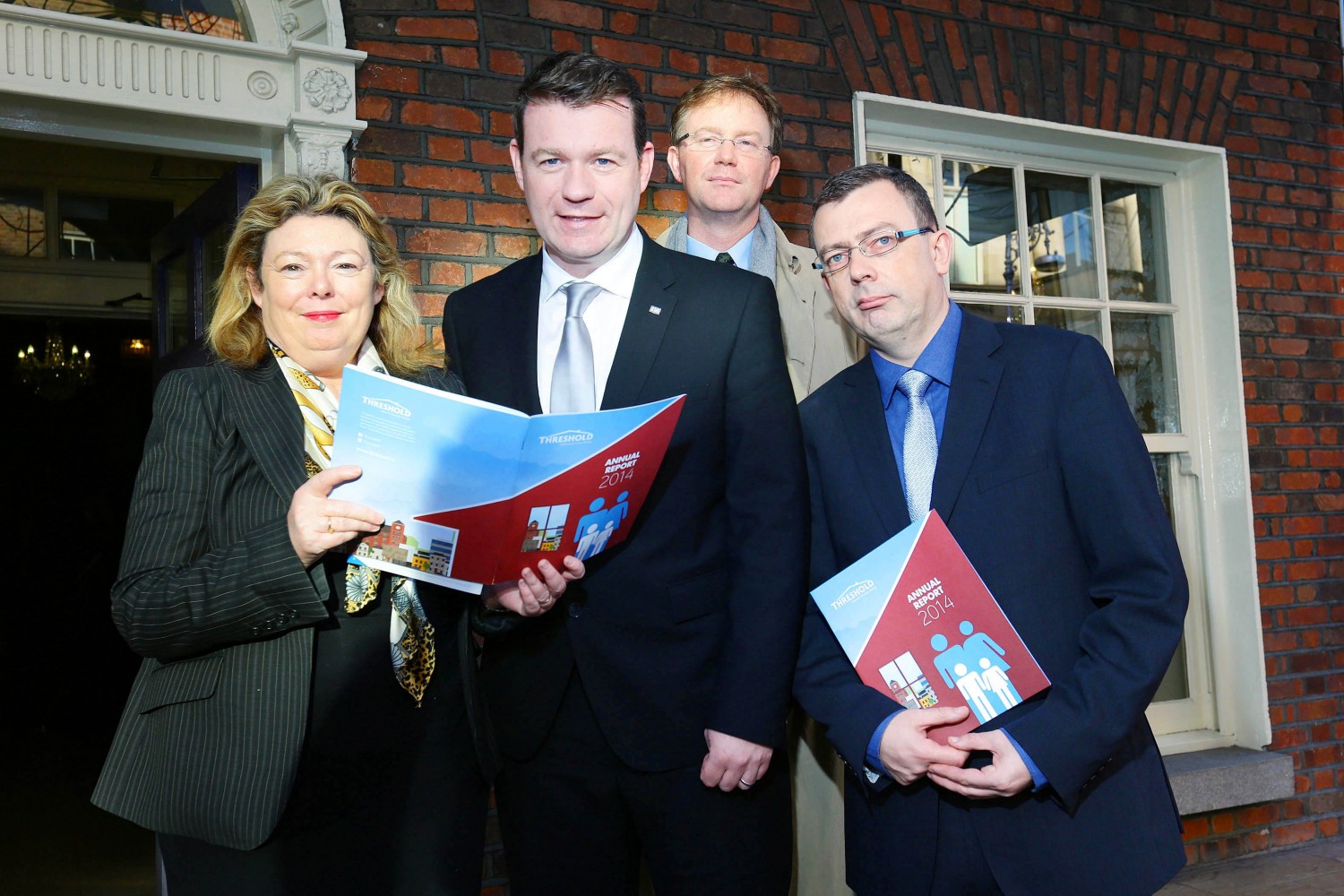 With homelessness now reaching unprecedented levels and rents approaching rates not seen since the height of the Celtic Tiger, the introduction of a new national strategy for the private rented sector is now an absolute requirement and should be a priority for whatever government is elected in the New Year. That’s according to Threshold, the national housing charity which launched its annual report for 2014 today (17.12.15).

Speaking at the launch of the report, Senator Aideen Hayden, Chairperson of Threshold, said that there could be no return to ‘business as usual’, when it comes to meeting the needs of the increasing number of people who have homes in the private rented sector.

“Threshold has welcomed a number of initiatives announced by the government in November, including what is effectively a rent freeze for two years and the introduction of a Deposit Protection Scheme under which deposits will be held by the Private Residential Tenancies Board.  These measures will offer a welcome level of relief for hard pressed tenants, but they will also provide space to develop a comprehensive strategy for the private rented sector.

“Evidence from Threshold’s services show that people continue to struggle to find accommodation within rent supplement limits. The discretionary approach that has been adopted just doesn’t cover every case, especially where people are trying to find new accommodation. Now that measures have been introduced to stabilise rents, rent supplement levels should be increased to help low income tenants to compete in the rented market.

“More Irish people are renting today than at any time since the 1950s. These family homes need a level of protection and stability that is sorely lacking at the moment.  A shift is needed from reliance on amateur landlords, with just one or two properties, who are focused on short term gains and who have neither the capacity nor resources required to provide a stable and well-managed private rented sector.  While traditional landlords will continue to play a valuable role, we need a sector with more professional, well-resourced landlords who are interested in long term income returns.”

Also speaking at the launch of the report, Bob Jordan, Chief Executive of Threshold said: “Threshold’s frontline services played an important role in preventing homelessness in 2014, as they have done throughout this year. Rising rents, a shortage of affordable accommodation and the growing gap between market rent and Rent Supplement placed a growing number of families at risk of homelessness. In response, Threshold developed a new service, the Tenancy Protection Service (TPS), to help tenants facing unaffordable rent increases in Dublin. This service has shown that the best way to prevent homelessness is to keep people in their existing homes, through increased rent supplement payments.

“For families putting down roots in a community, the private rented sector is much more insecure than other types of housing. Last year, Threshold dealt with approximately 60 cases a week where tenancies were ended prematurely by the landlord and where families faced the daunting task of finding an affordable alternative. While Threshold welcomes recent measures to tighten up the rules that apply when a landlord seeks to end a tenancy – for example, when they are selling the property – we believe that more needs to be done. The grounds under which a landlord can terminate a tenancy should be more limited to ensure that families have greater security in their homes.”

Key figures from the Threshold 2014 annual report launch today include the following:

Notes to the Editor

Threshold was founded in 1978 and is a not-for-profit organisation whose aim is to secure a right to housing, particularly for households experiencing the problems of poverty and exclusion.  Its main concentration of work is within the rented sector.  The organisation operates a national office, based in Dublin, and three regional offices.  Further information is available at www.threshold.ie.