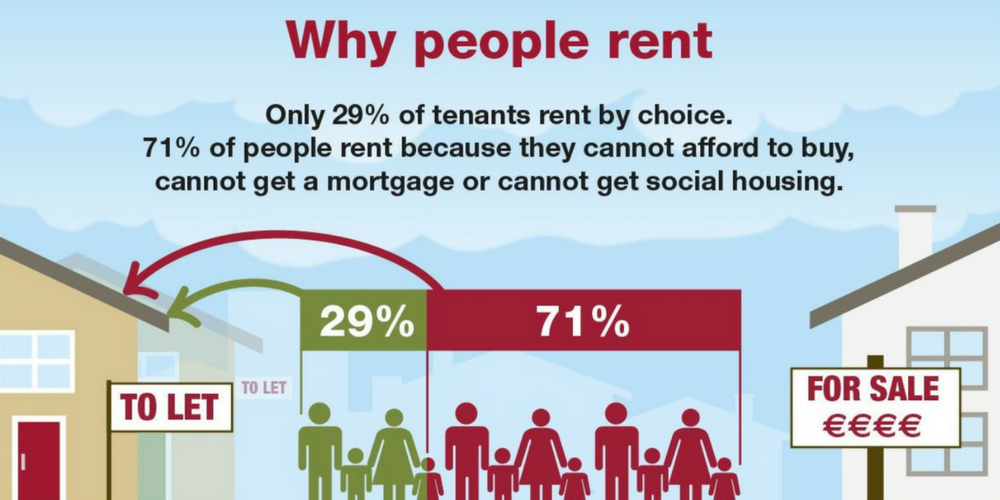 Less than a third of Threshold clients choose to rent

Less than a third of tenants rent their homes by choice. That’s according to Threshold’s Tenant Sentiment Survey released ahead of an event to mark the national housing charity’s 40th anniversary. The remaining 71% rent in the private sector because they cannot afford a mortgage to buy a property or attain social housing.

The survey of more than 300 tenants who had used Threshold’s service (nationally) was carried out in April 2018. It also found that:

Commenting, Threshold Chief Executive, John-Mark McCafferty said: “It is extremely worrying, but not surprising, that almost all of those surveyed said they had difficulty in finding rental accommodation. Nearly half of those surveyed were working, but the fact that 14% of tenants are spending more than half of their take home pay on rent shows that renting is increasingly becoming out of reach for many people. That, coupled with the fact that only 28% of those polled expect to be in a position to own their own home in five years’ time begs the question – what is the long-term solution for this group of people?”

He added: “At least one in five of all Irish households now live in the private rented sector – close to the European median. While our tenancy protections have improved over the last 15 years, legislative measures to protect renters are not robust as those in most other European countries and are failing to protect many vulnerable tenants in a market where there is an acute shortage of supply, and ever-rising rent costs.

“Threshold is this year marking its 40th anniversary. Between 1978 and 1980, we dealt with in the region of 3,000 cases – in the first three months of 2018, we have already helped 3,640 clients facing tenancy insecurity. The private rented sector, upon which we are so reliant, is broken. And while we welcome the Government’s initiatives to improve the situation, regulation alone is not enough. Enforcement and real penalties are required for the legislation to become effective.”

Threshold Chair, Dr Aideen Hayden said: “A home is not just where you live, it’s a place of sanctuary, offering protection from the stresses and strains of daily living. It’s a place to build memories, not just with our families, but with our community. Home is a base from which you can look ahead and plan. The current insecurity for tenants in the private rented sector means that they can’t look ahead and plan, they can’t put down roots. For families living in the private rental sector, worrying about a possible eviction and move at short notice plays havoc with children’s lives and their school attendance. It is a damming indictment of renting in Ireland today that since the crisis of family homelessness which began in 2013 the vast majority became homeless after losing a rented home.

“Threshold was established at a time when discrimination in terms of access to rented accommodation, illegal evictions and poor living conditions were widespread. Unfortunately, not much has changed in the intervening years – tenancy terminations, rent review / increases and substandard accommodation were the top three issues brought to Threshold’s attention by clients in the first quarter of 2018. Threshold sees adequate housing as a basic human right. We have a vision for a private rented sector that offers secure, good quality, affordable housing as part of a wider housing system which answers the needs of our people. Our independent advice and advocacy, and our policy-influencing based on the experience of our services, will be key to realising this vision.”

Threshold is marking its 40th anniversary with a series of events throughout the year, including a policy event in the autumn. The first event, which will be held at the Mansion House, Dublin this evening, will be addressed by UN Special Rapporteur on adequate housing, Leilani Farha, and Minister for Housing, Planning and Local Government, Eoghan Murphy TD.

Commenting, Ms Farha said: “The International Covenant on Economic, Social and Cultural Rights recognises adequate housing as part of the right to an adequate standard of living – this creates a duty for every State Party that has ratified the Covenant to realize the right to adequtate housing, including Ireland. It is imperative for the Irish Government to plan and to implement a human rights based housing strategy to eliminate homelessness and realize the right to adequate housing for all. The work of organisations like Threshold is invaluable to those renters who find themselves in difficult circumstances and whose right to housing has been violated.”

Commenting ahead of tonight’s event, Minister for Housing, Eoghan Murphy said: “I commend Threshold for the support and advocacy it continues to offer to tenants across the country and I would like to pay tribute to the staff engaged in this activity. Ireland is experiencing a housing shortage and a homeless crisis and tackling this is the Government’s number one priority. Threshold’s homelessness prevention work is central to this aim. We have developed a strategy to improve the private rented sector, Rebuilding Ireland is working, and we will continue to identify means by which to address this issue.”