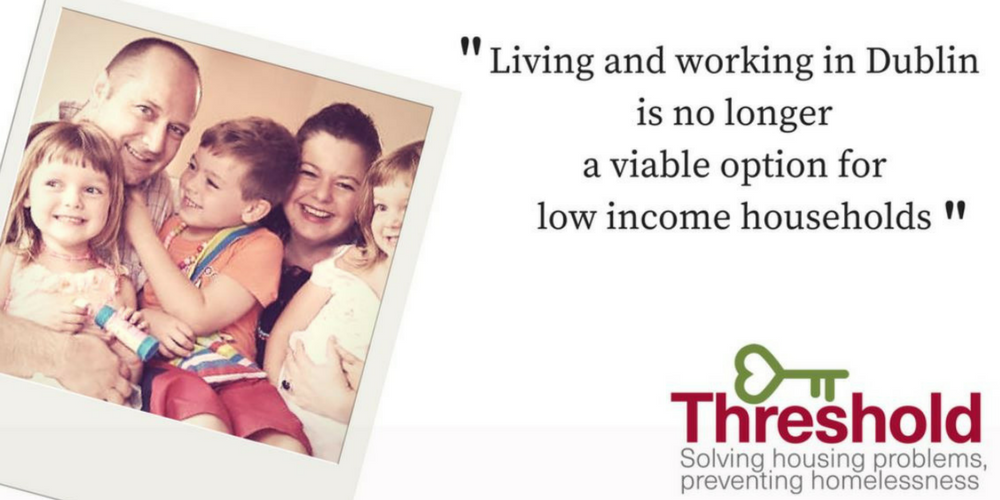 Chief Executive John-Mark McCafferty was responding to today’s (13.02.18) Daft.ie Rental Price Report, which covers the fourth quarter of 2017. The report indicates a 10.4 per cent increase in listed rents nationally in 2017, pushing national average rents to an all-time high of €1,227. This compares to an increase of 13.5 per cent in 2016.

Commenting Mr McCafferty said: “The pace and extent of rent increases is unsustainable for people living in the sector, and measures to deliver sustainability needs to be a critical focus.

“Where there is compliance with Rent Pressure Zone legislation, we have seen decreased inflation in a squeezed rental market. Continued policing of this legislation, coupled with nationwide roll out of RPZ controls, would be an effective step in bringing price stability into the rental market.

“According to Daft.ie, there were 3,143 properties available to rent nationwide on 1st February, the lowest figure ever recorded for this time of year since the series commenced in 2006. We have seen how the severe lack of supply has pushed the cost of private rental accommodation beyond the means of many, particularly those earning minimum wage, where the weekly take home pay for a 39 hour week yields €351. The average cost of renting a one bed apartment in Dublin now stands at €632 per month, meaning 50 per cent of the pay packet of a person on minimum wage is dedicated to covering rent.

He added: “We can no longer say this is just a Dublin issue when rents have risen by 9.2 per cent in Connacht and Ulster in 2017. Cork, Galway and Limerick were also subject to significantly larger rent increases than the national average with figures slightly more than 65 per cent in each case since 2010.”

The Daft.ie figures chime with Threshold’s own regional figures where 109 out of 853 calls to the Galway office in Q4 2017 were in relation to ‘Rent Review / Rent Increases’, the second most common issue after tenancy termination.

Significant rent increases were reported in the Commuter counties around Dublin, for example in Meath, where rents are up 80 per cent since 2011. This spike is replicated in other counties surrounding Dublin and is evidence of the staggering unaffordability of rental property for many households in the region.

Mr McCafferty said: “Threshold is worried that this is the beginning of a gentrification trend, like that of London, where only the most well off can afford to live in Dublin. Large parts of the Capital have historically always been places where people both lived and worked. This is no longer a viable option for low income households in particular those in receipt of housing supports such as HAP and Rent Supplement.

“This has worrying economic impacts when it comes to key workers who we rely on to provide vital services. We call on the Government to address this issue which is completely at odds with the stated government policy in the draft National Planning Framework ‘Ireland 2040, Our Plan’ to ensure sustainable communities. In Q4 of 2017 ‘Rent Review / Rent Increase’ was the third most common issue experienced by people and families seeking our services in our Dublin office with 187 cases out of 1474 in the Dublin Region.

Threshold chair, Dr Aideen Hayden said: “The impact of the RPZ legislation on rental inflation is very welcome. However it will take time to reach its stated purpose. In the meantime the homelessness crisis will continue until the question of affordability is tackled by policymakers. Fear of homelessness is a real issue for many of Ireland’s renters, with concerns about tenancy termination representing just under 34 per cent of all calls to Threshold in Q4 of 2017.

“While recent affordable home initiatives for first time buyers are welcome, those who will never be in a position to buy need to be supported by policies to help them access affordable, secure rental housing.  We are urgently calling on the Government to publish its report on Affordable Rental accommodation. Planning for affordability in the housing sector is key to ensuring balanced and sustainable communities in Ireland – whether in urban or rural areas.