Tony Heffernan’s Take on the Reshuffle

The former Tánaiste and Leader of the Labour Party, Dick Spring, once said that decisions he made in regard to appointments to government cost him more friends than any other aspect of his political career.

Appointments to government and especially cabinet reshuffles are fraught with danger for party leaders.  Final decisions on appointments are made by the party leaders alone, so there is no capacity to blame the parliamentary party or anyone else.  For everyone selected for appointment there will be half a dozen who will believe that they were more deserving of promotion.  Dropped ministers have the capacity to become a source of brooding discontent on the backbenches.

Unlike our nearest neighbours across the water, where there are regular clear-outs, there is no great tradition of major reshuffles in Ireland.  Leaders have tended to take a minimalist approach when change is forced on them. The one notable exception was Albert Reynolds who, following his election as Taoiseach in 1992, wielded the axe in spectacular fashion, sacking eight of the senior and nine of the junior ministers who had been appointed by his predecessor, Charles Haughey.

Even smaller scale reshuffles have a tendency to go horribly wrong.  In 1986 when Garret Fitzgerald attempted to revamp the Fine Gael-Labour coalition, Barry Desmond – metaphorically speaking – barricaded himself into his office in Tara Street in an attempt to hold on to both the Health and Social Welfare portfolios that he then held.  He was partially successful (he held on to Health), but the effect was to disrupt and delay Garret’s plans.

In 1991, Donegal Deputy Jim McDaid was appointed as Minister for Defence in a mini-reshuffle undertaken by Charles Haughey.  He was forced to resign within 24 hours when the Progressive Democrats belatedly objected to his appointment, following the emergence of photographs showing him associating with a Maze Prison escapee who was resisting extradition to Northern Ireland where was wanted in connection with serious paramilitary offences.

And of course it was a botched reshuffle in early 2011 that marked the final death rattle of Brian Cowen’s government. 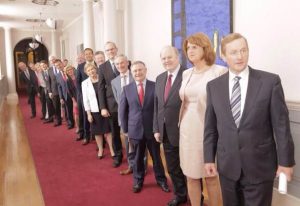 Cabinet reshuffles are great fun for political anoraks, but agony for those who are in line either for promotion or sacking.  Speculation about this particular reshuffle has been going since the local and European elections on May 24th.  The changes were inevitably delayed by the decision of Eamon Gilmore to stand down and the prolonged process of electing a new Labour Party Leader.  When Joan Burton was elected as Labour Leader on Friday July 4th, the original expectation was that the cabinet changes would be announced on the following Monday or Tuesday.

It took several more days for the Taoiseach and Tánaiste to finalise matters but, in fairness, this seems to be due to the need to finalise the political priorities for the remainder of the term of office of the government, rather than disputes over who was to be in or out.

The changes now announced mean that the cabinet will be significantly different, both in terms of personnel and allocation of responsibilities, from that which held its first meeting in Aras an Uachtaran on March 9th, 2011.  The personnel changes are more extensive on the Labour side, with three new ministers taking their place at the cabinet table.  The departure of Pat Rabbitte will be regretted by the colour writers and by many Labour members.  The decision of the Tánaiste to appoint her leadership rival, Alex White, to replace Rabbitte will be seen by some as an act of great generosity, but it may well be that Joan Burton simply recognised the political reality of the need to have another Dublin based TD in the cabinet, given that Gilmore, Rabbitte and Quinn were all on the way out the door.

Labour failed to achieve its stated objective of securing the Department of Jobs, Enterprise and Innovation.  It is always a risky strategy for a party in a coalition to publicly put its eye on a prize without being sure of the ability of deliver it.  The appointment of Ged Nash as a ‘super-junior’ in that Department will be some consolation to Labour, particularly if he is given significant delegated powers.

If Fine Gael was unwilling to sacrifice Richard Bruton in Jobs, Labour was always going to have to get another major Department to compensate for the departure of Eamon Gilmore from Foreign Affairs. The decision to take Environment is a potential double edged sword.  It is a Department with a huge budget and while it will give Labour control over housing – now recognised as probably the country’s greatest social problem – it will also make the party responsible for administering the much-hated water charges and property tax.  The new Minister for the Environment, Alan Kelly, is a formidable political operator who ran a very effective campaign to secure the Labour Deputy Leadership and how he now rises to the challenge of Environment may have a significant impact on Labour’s electoral prospects in the general election.

The appointment of two new women to Cabinet – Jan O’Sullivan to Education and Heather Humphreys to Arts and Heritage – will be widely welcomed by those concerned about the shocking gender imbalance in Irish public life.

Much of the speculation on the Fine Gael side centred on the future of controversial Health Minister, Dr. James Reilly.  One of the few things that Fine Gael and Labour backbenchers agreed on was the need to get Reilly out of Health.  The speculation right up to the end was that Reilly was going to Foreign Affairs, but he seems to have fought a successful rearguard action and the revamping of the Department of Children and Youth Affairs will give him a continuing role in some areas of health policy.

This has been one of the most extensive and speculated about reshuffles.  Only time will tell if it can restore the electoral fortunes of the two parties in government.