Catherine Heaney, Managing Director of DHR Communications, is currently participating in an executive course in Global Communications at Columbia University in New York.  In her latest blog from New York, she observes how institutions in the US seem less keen to embrace Twitter than their European counterparts…

Is it possible that New York (and hence the rest of the United States) is lagging behind Europe in terms of engagement with Twitter and social media?  I have not checked the statistics, but I do have a story to tell which has left me with this impression.

The Museum of New York City ticks lots of boxes.  It’s located in a cool Victorian-style building right opposite Central Park on the Upper East Side.  There are no queues and admission is priced reasonably.  Good quality espresso is served (a rarity in the City).  Most importantly, there’s some compelling content that can keep you engaged for at least a few hours.

So moved, I wanted to tell the world (or my small Twitter following) about my experience.  I composed a tweet and asked the museum’s welcome staff for their Twitter handle.  Unable to answer, I was sent around to three different people to seek it out, with the final one hazarding a guess.

My sense is that – while there are many excellent twitter activists in the City – some institutions run a mile from it (the Museum of NY City is not alone).

Maybe that’s because of how social media is perceived.  A high-profile New York journalist – whose career has spanned Reuters to the New York Post (so he knows a thing or two) – pronounces in bold and italics on a student hand-out that ‘Social media is bad for you’.  He warns that there’s no coming back.  You won’t have a second chance.

That would be enough to scare most.  But for the few that might be still brave enough, there are some benefits to be accrued.

What’s important is that you set parameters for engaging on social media.  First, establish why you want to use it and what kind of information you put out there.  How will it be monitored?  What are your protocols around content and language?  Develop a clear social media policy and let your followers know the type of interaction they can expect from you.

The Museum of New York City could possibly draw a few more visitors if it was a Twitter activist.  Its current exhibition on activism in New York highlights how the City has led the way in challenging lots of taboo around social issues.  It deserves visits, revisits, tweets and retweets. 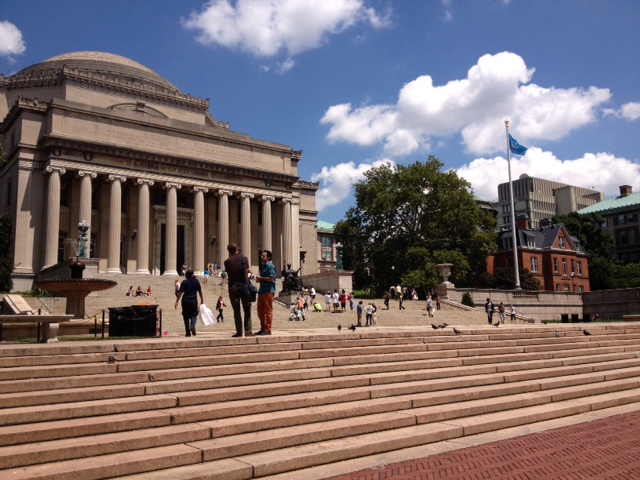 The Grand Library at Columbia University. Catherine’s school is the red building on the right-hand side of the picture.