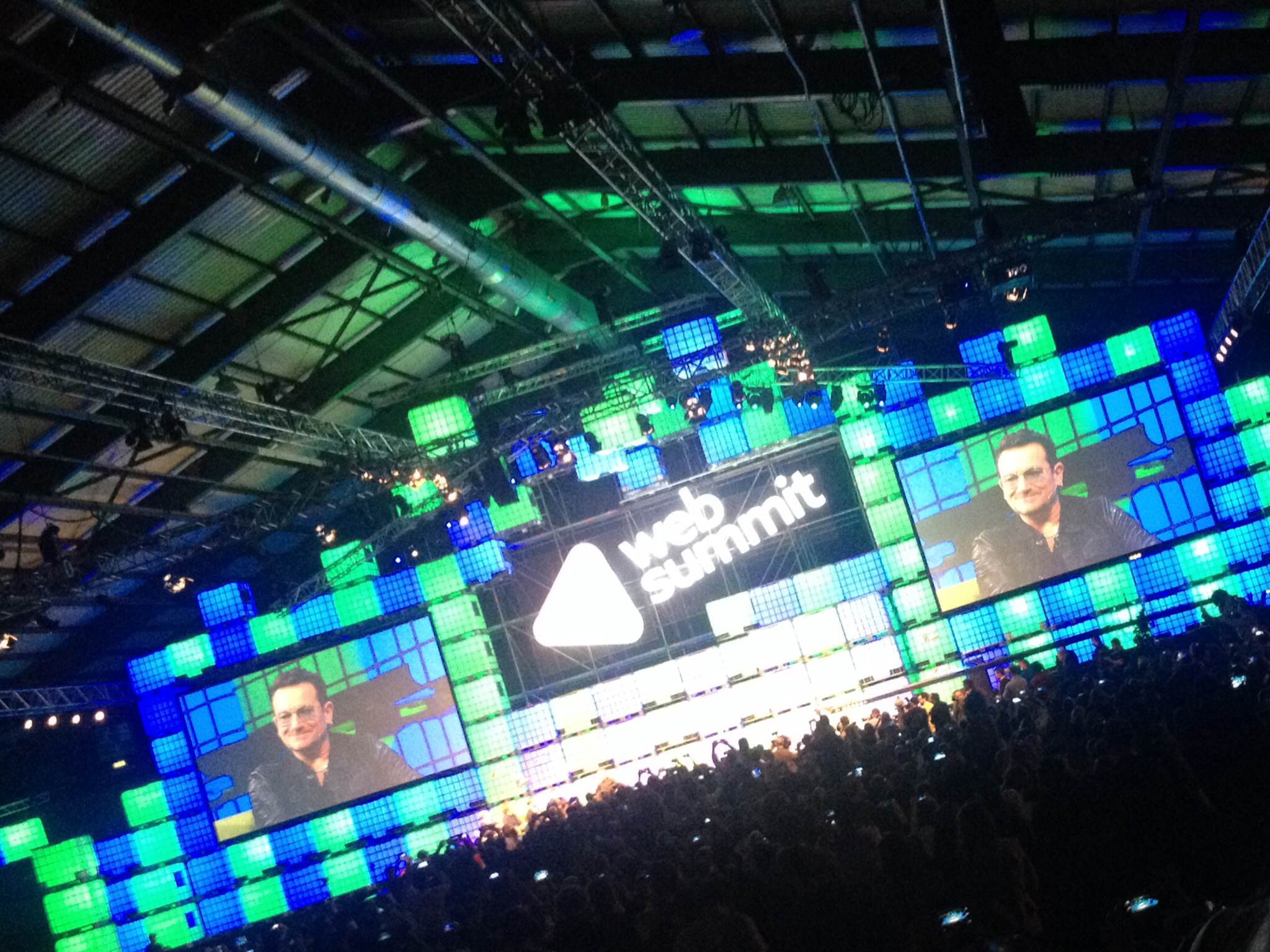 There was a definite ‘end-of-event’ feel to Day Three at the Web Summit, with shorter queues for (most) talks and generally less people milling around during the day. We took a slightly different approach to the day too, and rather than criss-crossing back and forth between the RDS and Simmonscourt, trying to cram in as many talks as possible, we decided to concentrate the majority of our time between the Marketing and Library Stages, both of which were in the main RDS building, and spent time talking to exhibitors and start-ups about their companies, products and ideas. 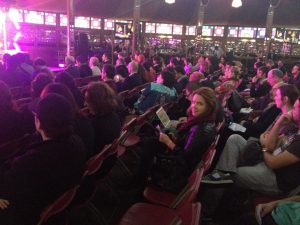 The highlight for me on Day Three was Tim O’Reilly’s ‘state of the nation’ address, which focused on the concept of the ‘Global Brain’ and took place in the comfy surroundings of the Library Stage (which was also the only area of the event that we managed to find real live working wifi!).

Introduced as “Ireland’s most accomplished expat”, Tim, who is founder and director of media company O’Reilly Media, described Google as a fascinating amalgam of human and machine intelligence. He also discussed the many ‘superpowers’ that humans now have, thanks to technology and the internet of things – the most important device being the mobile phone, as it is filled with sensors. Such ‘superpowers’ included Tim’s ability to blindly navigate the streets of Dublin with the help of GPS on his phone; and to plan his morning commute according to the traffic of the day, with the help of Google, who can now gauge how bad the traffic is by monitoring the movement of mobile phones along the world’s roads and highways.

As for his predictions for the future: Tim reckons that, increasingly, we are going to be talking to our devices, a concept that he does not think entrepreneurs have grasped quite yet. He also said that, rather than talking about jobs for the future, we should be talking about work and that entrepreneurs need to focus on work that matters; that will make the world a better place. I could have listened to Tim speak for the whole afternoon, but unfortunately 40 minutes was all we got. 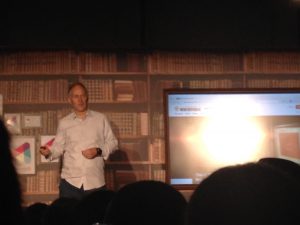 Other talks we saw on Day Three included:

This presentation was short and sweet and simply highlighted the following seven points when approaching digital marketing (though it didn’t really address the question of whether or not the practice is dead):

This was a really informative session with three very smart ladies, where emotions were highlighted as the most important element when it comes to data-sharing and purchasing decisions. With 50 per cent of purchasing decisions being based on emotional decisions, Wood said that the key to creating valuable videos is developing content that evokes emotion. The panellists also said that we are now entering the ‘post-viral’ era, where what matters most is valuable virality. Going back to the topic of emotions, Wood said that the key sharing trigger is the strength of emotional intensity, where you find yourself either laughing out loud or with shivers down your spine. 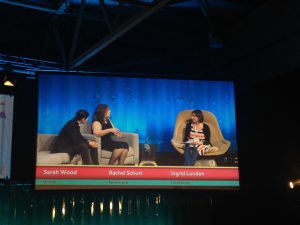 The notion of virality cropped up yet again during this talk, with Diageo’s Mark Sandy speaking of his allergic reaction to the word. His advice was the same as dozens of other speakers over the last few days, which is that content is king. He said that, while Twitter allows Diageo to reach millions of people, in order to create great content, which will give you the best possible chance of being shared by consumers, it’s essential to plan ahead; look at what is going to be in the news over the coming weeks; and pre-empt that.

Jan Rezab echoed Mark’s sentiments, using Facebook as an example. Nowadays, the number one goal when it comes to using Facebook is to ensure that your content gets onto people’s news feeds. Again, Jan said that the only way to achieve that goal is for brands and organisations to create great content. 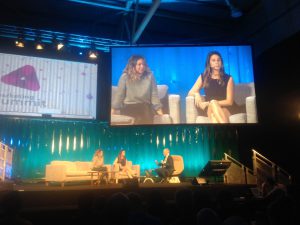 Being a PR professional myself, this was one of the elements that I was most looking forward to, so it was very disappointing that Ben Rooney’s outdated and frustrating views on PR dominated the majority of the conversation.

Despite this, both Brooke and Katherine did make very interesting points, describing the role of a PR as a connector tasked with building trust between the client and members of the media, in order to build clients as a resource to the media. Both said that the dawn of Twitter has been invaluable when it comes to building that trust, as it enables you to connect with journalists and members of the media from around the world.

Brooke’s top PR tip was to take an hour out of every day to read who is covering what, and to use that knowledge to make the most targeted pitches. While Katherine’s top advice was to get your product / service right, before thinking about PR. 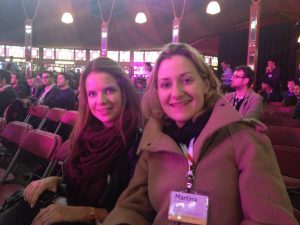 We popped into this talk on the quirky music stage, which was housed in the Spiegeltent, best known from the Dublin Fringe Festival down through the years. The panellists were both incredibly accomplished and Moby made a surprise appearance in the audience half-way through this talk.

Jonathan said that while the music industry has evolved in recent years, the fundamentals of management have remained the same, which is about great artists making great music. 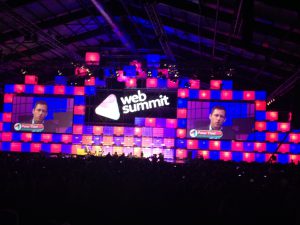 Thiel is a German American entrepreneur, venture capaitalist and hedge fund manager, who first made his fortune as co-founder of PayPal. He was also the first outside investor in Facebook, and sits on the company’s board of directors.

This talk was particularly packed and high-achieving Thiel said that, although he gets pitched by flying car companies a couple of times a year, he has not yet invested in one.

Caroline turned out to be quite the formidable interviewer (the best I saw over the three days), and she pulled Thiel up over comments he made in recent weeks about Europe being lazy. He didn’t shy away from this question and admitted that, despite being German by birth, he associates the country with pessimism and being too comfortable, while he described USA, and Silicon Valley in particular, as filled with optimism. 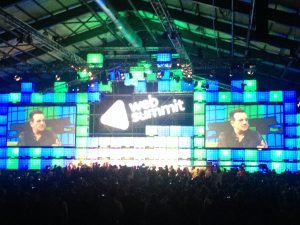 Centre Stage was packed to the gills for this particular talk and there was an enormous media scrum in front of the stage, all hoping to get a photo of the one and only Bono.

To be honest, I found this talk a little boring and, once the excitement of Bono being on the stage in the room dissipated, so too did the crowd, as people started to head home from Web Summit 2014.

Of the crowd that hung around, however, Bono had them eating out of his hand, telling them that the techies and start-ups gathered were the rock-stars of today and that he would be very excited if he was starting out in a band in this day and age, with all the technology available. He also discussed the latest U2 / Apple controversy, saying that they had managed to get people who don’t care about U2 to be mad about U2, which he would call an “improvement in the relationship”. That got him a laugh, and it was funny to be fair, but the other speakers didn’t really get much of a look-in.

All in all, it was a great, but tiring, three days, with lots of inspiring talks, despite the odd hiccup and lack of wifi. The eyes of the world were on Dublin this week. The restaurants, bars and streets were buzzing and busy, which was great to see – as well as being a much-welcomed injection for the economy! 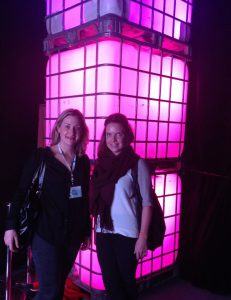