A tour of Fair City’s Carrigstown; a football match featuring Senators and TDs; a cookery demonstration by Rozanne Stevens; and a trip to a new housing estate in Ballina – these were just some of the things keeping us busy in recent weeks!

First off, as part of our ongoing training programme with the New Communities Partnership, we organised a tour of key political and media institutions in Dublin last week for representatives of new community organisations from Limerick.  Stops on the tour included Leinster House; the office of the European Commission Representation in Ireland; and RTÉ, where the trainees were delighted to meet newsreaders and journalists Anthony Murnane and Bryan Dobson, and visit the sets of ‘Fair City’, ‘Winning Streak’ and RTÉ News and Sports.  A big thanks to all in RTÉ, Leinster House and the EC Representation office who helped this tour take shape! 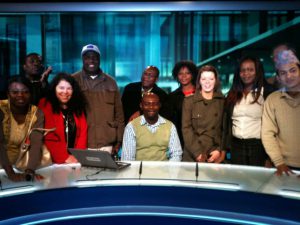 Also keeping us busy recently was FARE Week 2010 – the Football Against Racism in Europe Week, supported by FIFA and UEFA, and organised in Ireland by the FAI.  This was launched with the help of former Ireland international Curtis Fleming, while – towards the end of the week – we organised a special friendly match between teams from the Houses of the Oireachtas and international embassies based in Dublin.  Togging out for the Oireachtas on the day were: Niall Blaney TD, Chris Andrews TD, Paul Gogarty TD, Michael D’Arcy TD, Joe McHugh TD and Senator Mark Daly.  The embassies’ team, meanwhile, included representatives from the UK, US and The Philipinnes, as well as South Africa’s Ambassador to Ireland, His Excellency AJD Ndou. 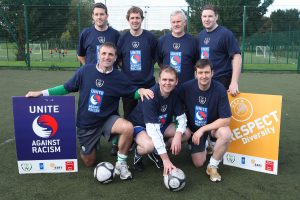 Last week also saw us working on the launch of a new guide for community food initiatives, produced by Healthy Food for All.  Celebrity chef Rozanne Stevens very kindly lent her support in helping to promote the guide: at the launch event, she gave a healthy food cookery demonstration to those present (including Pat Carey TD, Minister for Community, Equality and Gaeltacht Affairs) and subsequently appeared on various media outlets, promoting the guide and giving healthy food tips.

We also travelled to Ballina, Co. Mayo, last week for the opening of the first phase of a regeneration project being managed by Clúid Housing Association.  The opening event – for the regenerated St. Patrick’s Estate in Ballina – was attended by Michael Finneran TD, Minister of State for Housing, and his colleague and local Mayo TD, Dara Calleary, Minister of State at the Department of Enterprise, Trade and Innovation.

We’ve also been working with The Digital Hub and drinkaware.ie on the 2010 / 2011 DARE2BDRINKAWARE.ie film competition.  The launch of this year’s competition took pace at the IMC cinema in Dun Laoghaire.  The guest of honour at the launch was acclaimed Irish director, Ken Wardrop, whose ‘His and Hers’ film has received rave reviews this year. Third-level students now have until 11th November to submit initial proposals for this year’s competition and be in with a chance to win shares in a prize fund of up to €5,000. 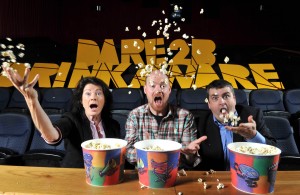 Fionnuala Sheehan, Chief Executive of drinkaware.ie; award-winning director Ken Wardrop; and John Hurley, Director of Learning at The Digital Hub, pictured at the launch of the 2010 / 2011 DARE2BDRINKAWARE.ie competition

Finally, we worked with the Well Woman Centres to promote World Menopause Day last week; we delivered a three-day programme of training in media and political advocacy skills; and we have been working with Comhar Sustainable Development Council over the past few days to promote a seminar on environmental taxation, which took place in Dublin today and was attended by the EU Commissioner for Climate Action, Connie Hedegaard.

So we’re all looking forward to a restful weekend!