There’s been a number of exciting developments in DHR which we will be announcing soon. In the meantime, we’ve been keeping busy with various client projects.

Yesterday, we assisted Ballymun Youth Action Project‘s launch of two reports; one on a conference they held recently and another on youth perception of drugs and alcohol use in Ireland.

Earlier in the month we supported Clúid Housing Association‘s announcement of a new national contact centre and work positions.

Threshold also launched its annual report for 2010 and called on the government to prioritise sustainable housing solutions over emergency accomodation and street services.

The Simon Cumbers Media Fund student scheme’s roadshows are being rolled out in various colleges and universities in Ireland. So far we have been to University of Limerick, Independent Colleges, Dublin Businsess School, NUI Galway and Cork IT.

Looking ahead, we are working on the Immigrant Council of Ireland‘s 10th Anniversary Celebrations which will be held in mid-December.

So a brief summary of our work this month. Check here soon as we will be making major announcements soon. 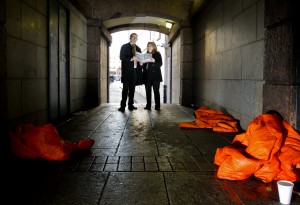 Bob Jordan, CEO and Aideen Haydeen, Chairperson of Threshold at the launch of their 2010 Annual Report.